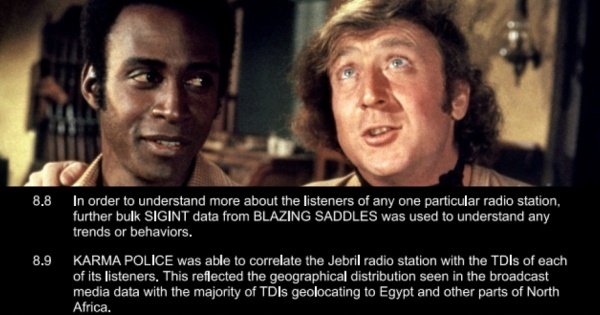 One of the most prominent influences of pop culture on government and on the deep state is in the use of code names.   From the capture of Saddam Hussein to a counter-smuggling helicopter unit in Hawaii, from a mass surveillance program named after Blazing Saddles to Secret Service and MI5 code names taken from cartoon characters, this is a widespread and frequent phenomenon.  It seems that the military and intelligence services are as obsessed with pop culture as anyone else, with both hilarious and terrifying results.

Following the 2003 NATO invasion of Iraq Saddam Hussein disappeared.  A manhunt lasting over six months culminated in his capture in a specially-dug bunker in ad-Dawr, near Tikrit.  The Special Forces-led operation leading to Saddam’s capture was code named Red Dawn, after the 1984 movie.  This film had assistance from the Pentagon during the scripting phase and they offered full support to the production but director John Milius refused because it was too expensive.

Between 2006 and 2011 the Bureau of Alcohol, Tobacco and Firearms (ATF) ran a series of sting operations where they allowed known arms dealers to sell guns to illegal buyers with the hope of tracking them back to the leaders of Mexican drugs gangs and cartels.  This was supposedly botched when the ATF lost track of the weapons.  Some have tried to spin this as the ATF wilfully and deliberately armed the cartels, but the number of weapons seems too small to be significant in an arena where weapons are readily available and violence is extremely common.

The overall operation was called Project Gunrunner but one specific case focused on Jake Chambers, a straw buyer who was part of a network that would purchase guns in border states and then smuggle them into Mexico and sell them on to the Sinaloa cartel.  When the ATF agents found that Chambers was also a member of a car club the code name Fast and Furious was used to refer to the case against him. The Fast and Furious franchise has benefited from some state sponsorship.  The most recent entry in the series Furious 7 was filmed on location in Dubai in a deal negotiated by Rich Klein, a DC lawyer who also works as a consultant to the entertainment industry.  Even as the Operation Fast and Furious scandal began to break into the news in 2011 the fifth film Fast Five was being supported by the FBI’s Investigative Publicity and Public Affairs Unit, and had FBI Special Agent Dale Shelton working as a consultant.  It does not appear that the FBI have continued this assistance to the franchise, possibly because of the negative connotations of the brand name.

US Congress – Fast and Furious: Accounts of ATF Agents

The much-disputed Operation James Bond was a WW2 project hatched by British intelligence to try to kidnap/exfiltrate Hitler’s secretary, Martin Bormann.  In 1996 Op JB was published by John Ainsworth-Davis, who worked for British naval intelligence during the war.  According to this version of events Bormann was successfully smuggled out of Germany in an effort to recover the hidden Nazi fortunes.  Many have criticised this book, arguing that Bormann endured a different fate or that British intelligence may have discussed or planned such an operation but never actually carried it out.  Nonetheless, the book does include a 1963 letter from none other than Ian Fleming (assistant to the head of Naval Intelligence) which broadly confirms the details of the operation.

Two GCHQ mass surveillance programs also took their names from popular culture – Karma Police and Blazing Saddles.  These programs were used, sometimes together, to analyse data that came from surveillance on internet radio stations.  A sample of three months of data from August to October 2009 was analysed by GCHQ to see who was using radio on the internet (aside from Mark Cuban).  Even this small selection from the available data represented 6.68 million unique events originating from over 224,000 IP addresses.

Karma Police was built in 2007 and 2008 with the aim of identifying ‘every user visible to passive SIGINT with every website they visit, hence providing either (a) a web browsing profile for every visible user on the Internet, or (b) a user profile for every visible website on the Internet.’  Exactly what Blazing Saddles was for is not clear from the available documents, but it did provide ‘bulk SIGINT data’ which was used so that GCHQ could ‘understand more about the listeners of any one particular radio station’ by understanding more about ‘any trends or behaviors’.  The fact that the American spelling of the word ‘behaviours’ is used in the document does beg the question of whether these GCHQ files are authentic, or simply edited for US consumption when they were shared with the NSA.

Not wanting to be left out of the fun, the US Secret Service has a habit of using designations for the people they’re protecting that are taken from movies and TV.  Some of the funnier and more interesting ones are:

It’s particularly funny that Reagan would choose the name of a film that he never appeared in, simply because he liked Westerns and the vision of Americana they offered.  This is especially ironic given that Reagan was not an anti-government brave lone gun slinger type, but spent the whole of WW2 making military propaganda movies and then became an FBI informant snitching on suspected Communists.  It is also amusing listening to the Secret Service tapes from the day Reagan was shot, where they keep repeating (wrongly) ‘Rawhide is okay’.

The Pirates of the Caribbean

The US Marine Corps maintain a base in Kaneohe Bay in Hawaii, the home of the Helicopter Anti-Submarine Squadron Light 47.  Detachment Three of this squadron are known as the Pirates of the Caribbean – an ironic title for three reasons: (1) They are actually used in counter-piracy and counter-smuggling operations, (2) They are based in Hawaii, thousands of miles from the Caribbean and (3) because the fourth Pirates of the Caribbean film was partly shot at their home base in Kaneohe Bay.  The theme song from the films is even part of the repertoire of the USMC Band.

These were two Norwegians who were recruited by the Nazis during WW2 and sent to Britain to spy and carry out sabotage attacks.  Upon landing in the UK they turned themselves over to the authorities and became double agents, sending back chicken feed and disinformation to their handlers.  The Double-Cross System was so effective that the entire Nazi spying apparatus in the UK was either captured or turned, helping to deceive the Axis powers about the Allied fightback in Europe.  The Norwegian duo were code named Mutt and Jeff after the popular comic strip characters of the time.  The reason for this was simple – one was taller and slender and the other was shorter and stocky. The case of Mutt and Jeff and its implications for the relationship between the intelligence services and popular culture will be the subject of a future episode of ClandesTime.

Perhaps the strangest and most disturbing use of pop culture in creating a code name is the Stepford Bombers – MI5’s code name for the alleged suicide bombers who attacked London on 7/7.  Two of the supposed bombers – Sidique Khan and Shehzad Tanweer – came to the attention of MI5 and Special Branch multiple times in the years before the bombings in 2005.  Each time information was not passed on, investigations were halted due to mysterious database glitches, obvious connections weren’t followed up and either this was a total pig’s breakfast or the cover for a much more nefarious plot.

Calling the suspects the ‘Stepford Bombers’ only heightens suspicions.  There is no real town called Stepford or any other reference to a place called Stepford outside of the novel and film adaptations of The Stepford Wives.  The book and films tell a story of a secret society who convert their wives into robots to make them ‘perfect’ and totally compliant.  The implication that the alleged 7/7 bombers were under the control of a secretive group is presumably a deliberate one on the part of MI5, either rubbing our faces in it or enjoying a sick in-joke at our expense.

MI5 Summary of Investigations that led to the Stepford Bombers