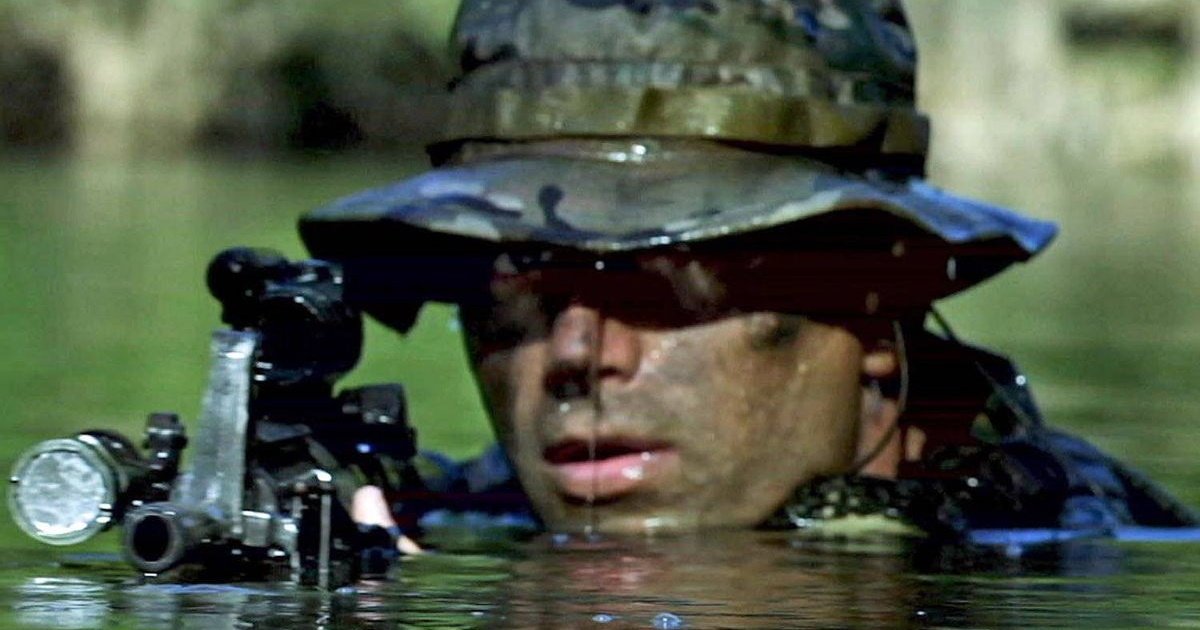 Act of Valor: When the US Navy Commissioned one of the Worst Films Ever Made

2012’s Act of Valor is widely recognised as the terrible, dull, depressing, futile piece of cinema that it surely is, but what is less well-recognised is that it was the brainchild of the US Navy’s Special Warfare Recruiting Directorate, and they had a hand in every stage of its production.

Documents obtained by MuckRock’s Michael Morisy include a memo outlining the film’s development, which to my knowledge is unique in Hollywood history.  In 2005 the DOD told its various branches that they needed to recruit several thousand extra SOF operators, with the Navy told it needed an extra 500 SEALs.  The memo notes that the SEALs had never had a full training class at any point in their history, that the basic pass rate was just 24% and that the average net growth in personnel was just five SEALs per year, way short of the 100 per year the new directive required.

To respond to this new demand they established the Naval Special Warfare Recruiting directorate and started producing videos for recruitment purposes. They developed an idea for a documentary, which evolved into a feature film idea titled I Am That Man. They invited several production companies in to pitch for the job, and their panel unanimously voted for the Bandito Bros., who were best known for making sports documentaries. Apparently the panel liked that.

The panel voted unanimously 8—0 for Bandito Brothers. The Navy selected the Bandito Brothers to undertake the production of “I Am That Man” (later renamed “Act of Valor”) in the immediate future (see reference (a)) NAVINFO WEST letter dtd 9 APR 08). ██████████████████

██████████████ Voting members sited(sic) the outstanding sports cinematography the Bandito Brothers had produced in their work on “Step Into Liquid” and “Dust to Glory”, the two largest grossing sports documentaries to date. ‘

The AOV story was created by the Bandito Brothers and their writers. Their research included studying interviews from 40 operators, touring facilities across the force and reading the SEAL and SWCC ethos. The story was also influenced from the headlines and from civilian artistic templates traditionally relied upon to generate compelling scripts.

Legendary Pictures, a financial supporter and partner on “Act ofValor” has also produced films that were exceptionally successful among males age 14-28. Those movies include “300”, “Batman, the Dark Knight”, “Hangover”, and ”The Town”. Legendary had not worked with the military on a film but Bandito Brothers have made 9 military films to date for the Navy, the Air Force and the Marine Corps.

These 9 military films were all recruitment shorts – Bandito’s record in features prior to Act of Valor was non-existent, which may explain why the resulting film is so very, very bad.

I think this is partly why the Navy went for them – by dealing with a small studio desperate to break into mainstream feature films the Navy could boss them around and get them to do whatever they wanted. Since Act of Valor Bandito have only made two big films – an adaptation of the video game Need for Speed and a film about a guy who dies for 90 minutes and comes back to life claiming to have been to heaven, which has a 4.7 out of 10 score on IMDB.

While there are no script notes in the released documents, it’s clear that the Navy basically co-wrote the film. They list key messages that were written into the film at their behest, including how ethnically diverse the SEALs are, and how they did their usual rough cut viewing and asked for changes to polish the presentation to their liking.

Specific points which NSW leadership wanted the film to highlight:

NSW forces operate in the most challenging maritime environments and are the force of choice among all SOF for subsurface special operations.

SEALs and SWCCs work shoulder to shoulder with their SOF counterparts from partner nations.

NSW as a maritime force is more diverse thanthe public often realizes. To that end, the most challenging maritime mission in the film, a SEAL Delivery Vehicle insertion from an SSGN submarine is carried out by two diverse (Hispanic and African-American) combat proven SEALS.

Half a dozen real-life SEALs starred in the movie, and almost all the action was shot during real Naval Special Warfare training exercises, which is one reason it cost only $12 million dollars to make. They also used footage from SEAL training and other stock footage provided by the Navy – basically everything in the film was provided or co-produced by the Navy.  In return, Bandito didn’t have to pay the Navy anything because the whole script had been moulded to fit in with the Navy’s scheduled exercises.

But I should say that the movie failed. It made around $80 million so it turned a good profit on its small budget, but it is almost universally recognised as the boring waste of time that it is.  I haven’t seen any evidence that it helped recruitment, and much of the media coverage on Act of Valor is more about the Navy’s absurdly deep role in its production than in the film itself as a piece of cinema.  Bandito did announce a sequel, but there’s no sign it is actually being made, and when a producer pitched Phil Strub about a TV series based on the film he was told it was a non-starter.  It appears the Navy recognised that having that much control over the product tainted the brand – propaganda doesn’t work as well if people recognise it as propaganda.

US Navy entertainment liaison office file on Act of Valor