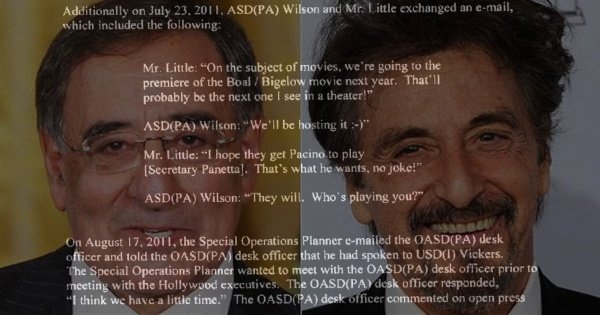 On May 3rd 2011, the day after the raid that supposedly killed Osama Bin Laden, CIA director Leon Panetta suggested that Al Pacino should play him in movie versions of the story.  He made the remark during a pre-planned tour of CIA headquarters by 25 new members of congress.  This is, of course, some weeks before the makers of Zero Dark Thirty got in touch to make one of the most CIA-influenced films of all time.

The source material that is now available on the CIA and DOD involvement in the film is considerable, but it omits one exchange that confirms that Panetta was not just making a flippant remark.  The involvement of the CIA and DOD in Zero Dark Thirty was unusually close, leading to allegations of security breaches and other improprieties.  This led to the DOD’s Office of the Inspector General (OIG) conducting an investigation into what had happened.

The draft version of the OIG’s report records some email exchanges not in the previously-released documents.  One of these exchanges was between George Little and Douglas Wilson, two assistants to the Secretary of Public Affairs for the DOD:

Little: On the subject of movies. we’re going to the premiere of the Boal/Bigelow movie next year. That’ll probably be the next one I see in a theater!
Wilson: We’ll be hosting it 🙂
Little: I hope they gel Pacino to play [Secretary Panetta]. That’s what he wants. no joke!
Wilson: They will. Who’s playing you?

This office banter is interesting for all sorts of reasons.  First is the notion that the people working in the Public Affairs office for the Pentagon never see movies actually in the cinema, because they always get preview versions on DVD.  Wilson’s joke that ‘We’ll be hosting it’ (the première of Zero Dark Thirty) is not really a joke, as movies have premièred at Langley, the Pentagon, even on board a US Navy submarine.

Then there is the issue of who George Little is.  He is not to be confused with George L Little, who was head of the costume department on Zero Dark Thirty, but was Leon Panetta’s director of Public Affairs when Panetta was head of the CIA.  When Panetta moved over to become Secretary of Defense, a decision announced only days before the Abbottabad raid and which took place weeks after it, Little moved over to become Panetta’s Public Affairs man at the DOD.

So he was very close to Panetta, and in a position to know his thinking on who should play himself in the film version.  The question of why, in the middle of perhaps the most important covert operation since the turn of the century, the Obama administration decided to move its CIA director to the Pentagon to replace another ex-CIA director who was retiring (Gates) has never been answered in a plausible way. The choice of Pacino is an interesting one, not just because he looks nothing like Leon Panetta, but also because Pacino starred in the 2003 film The Recruit, which was written and produced with the assistance of the CIA, in particular Chase Brandon.  Indeed, Pacino’s character in the film is partly based on Brandon and the film was allowed access to Langley for some scenes.  It seems Pacino wasn’t available, and in the end the filmmakers settled for another well known gangster-actor in James Gandolfini.  Even after the film came out Panetta continued to talk about how the guy who played him ‘isn’t quite right’ and that his ‘preference would have been Pacino’.  This was clearly something of an obsession for a man who, as head of the CIA and the DOD, really should have had more important things to think about.

You can download the draft version of the DOD’s OIG report here (PDF) and the final report that doesn’t mention this email exchange or any of the more serious allegations against Panetta here (PDF).