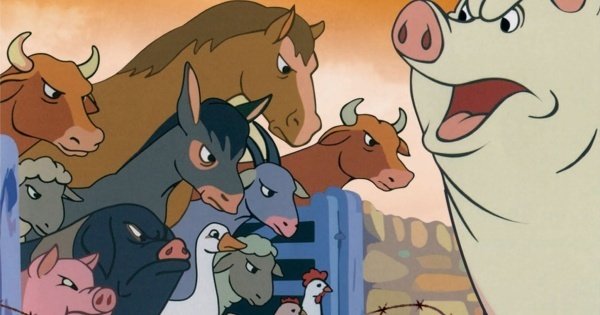 The 1954 animated version of Animal Farm was financed by the CIA via Hollywood producer Louis De Rochemont, and he hired Halas and Batchelor, making it the first feature length animation to be produced in the UK.  Last year, coinciding with the 60th anniversary, a special edition DVD was released that included PDF copies of papers from the production itself.

The CIA deny having any records of their involvement in the production – my own FOIA request came back saying that others had requested the same files and none had been found.  As such, the ones on the DVD from (presumably) the Halas and Batchelor archives are the only publicly available documentation actually from the time of the film.

Most interesting is a cartoon strip version of the film, including the pro-revolutionary ending inserted by Louis De Rochemont, probably on behalf of the CIA.  While the exact origins of this cartoon strip are unclear, it was likely produced as part of the promotional/spin-off merchandise that came with this film. The most important document in the group is the ‘tension chart’ outlining the desired emotional responses to events in the plot and how this progresses over time:

That they were mapping this in such detail shows how carefully crafted this film was, and how dedicated they were to making this piece of propaganda effective, though whether Halas and Batchelor knew exactly who was pulling the strings remains unclear to this day.

You can download the cartoon strip version of the 1954 film of Animal Farm here (PDF) and the tension chart for part of the film here (PDF).  The full set of documents is over 100mb and so I will only upload it if there is sufficient interest.