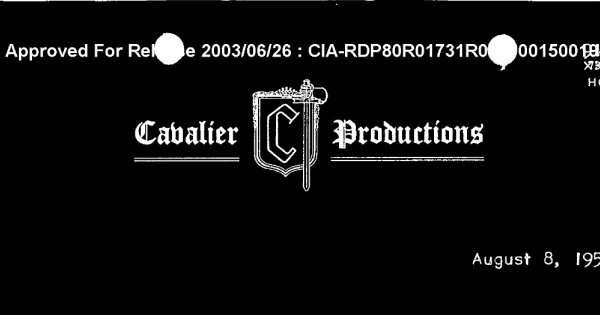 Back when the CIA ‘deliberately cherished anonymity’

As with most intelligence services, the CIA in the early days were keen on having no public profile at all.  In mid-1951 when the CIA was barely five years old, film and TV producer Eugene B Rodney was working on a spy story script and wrote to his associate Walter Bedell Smith, then director of the Agency, because the script contained references to the CIA.  While the initial letter is not available, it is clear from the response from Smith and then Rodney’s reply that Rodney had assumed that the references to the CIA would have to be cut because they ‘deliberately cherish anonymity’.  Rodney then removed all references to the CIA from the script, and it appears the film never actually got made. Smith’s response also makes fond reference to a lunch the two man had some five years earlier with Louis Marx – presumably the toy manufacturer, a man who was so in love with the military that he named his sons after generals and most of his products were models of soldiers and weapons.  The only reference I could find to Marx in the CIA’s database was a letter to him from ‘Beetle’ – the nickname of Walter Bedell Smith.  It reads, ‘In dough business your department is production.  Mine is distribution.  Stick to your own department and wear your robe.’  This sort of joking apparent threat and using a metaphor like the ‘dough business’ is reminiscent of gangster movies, making this somewhat redacted letter a rather unpleasant puzzle. You can download all three documents here (.rar file).