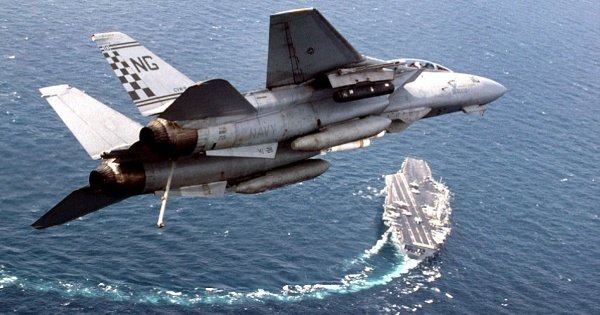 Following the raid in Abbottabad in May 2011 the body of ‘Osama Bin Laden’ was flown to Bagram Air Force Base in Afghanistan, where Commander of US Special Forces Admiral William McRaven did not initially recognise him.  From there the body was flown to the aircraft carrier USS Carl Vinson, where an autopsy was performed before a burial at sea.  This is the same aircraft carrier that 25 years earlier featured in the film Top Gun.

It seems clear that there was a raid in Abbottabad in 2011 and that some people were killed.  Exactly who is anyone’s guess, in the absence of any publicly verifiable evidence.  The CIA’s own facial recognition software compared a photo of the corpse with known photos of Bin Laden and only got a 90-95% match.  Given that the fundamental shape and proportion of someone’s facial features do not change over time, this actually suggests that it wasn’t Bin Laden.  Similarly, no one who saw the corpse recognised it.  The reports of exactly when the DNA tests were done to determine a genetic match to Bin Laden’s sister’s brain are conflicting, and of course the results of those tests have never been made available for verification or peer review or anything of the sort.  As such, we cannot be certain.  It might have been Bin Laden, it might not.

The burial at sea, aside from being completely contradicted by the Seymour Hersh story, is inherently implausible.  The ludicrous nature of this aspect of the official story is well illustrated by hacked emails from Stratfor, one of the world’s premier private intelligence organisations.  According to these emails, Stratfor’s vice-president for intelligence Fred Burton’s sources were giving him a very different version of what happened to the body.  Rather than being buried at sea, according to Burton the body was taken to the US.

Email 3 at 5:33, Burton wrote, ‘We told the Pakis after we killed him. But, will praise GOP publicly. All spin and bullshit.’

Email 5 at 5:51 says ‘Than onward to the Armed Forces Institute of Pathology in Bethesda.’  He then wrote that, ‘If body dumped at sea, which I doubt, the touch is very Adolph Eichman like. The Tribe did the same thing with the Nazi’s ashes. We would want to photograph, DNA, fingerprint, etc. His body is a crime scene and I don’t see the FBI nor DOJ letting that happen.’

Another email from Senior Watch Officer Chris Farnham comments that, ‘Bogus pics and bogus news stories of burials at sea. Makes the US look dodgy and encourages distrust that the whole thing is real…., conspiracy, CIA, Illuminati, etc. Wonder if it’s just a confluence of events or just a consequence of the internet and the loonies it brings out.’

He’s not wrong that it was the story of the burial at sea that made a lot of people stop and ask ‘hang on, did this really happen?’.  It remains perhaps the most poorly-explained and therefore contentious elements of the whole situation.  Emails released under FOIA show that the burial was not attended by any normal sailors, and that ‘only a small group of leadership was informed, less than a dozen total’.

Well, this is awkward…

The aircraft carrier on which the body was temporarily housed before being ditched over the side in accordance with ‘Islamic customs’ (which in reality state the opposite) was the USS Carl Vinson.  Launched in 1980 it is a Nimitz-class supercarrier that participated in operations Earnest Will, Desert Strike, Desert Fox, Enduring Freedom and Iraqi Freedom.  That is, it has been involved in most of the major US wars in the Middle East since it was commissioned.

The USS Vinson was also one of three major ships used for the filming of Top Gun, Tony Scott’s 1986 military drama that set a new standard for Pentagon-Hollywood collaborations.  The combination of custom-written rock music, screaming fighter jet engines and the best homoerotic volleyball scene in cinema history proved irresistible both to moviegoers and to young men considering a career in the military. The other other ships were the USS Enterprise and the USS Ranger, and while most reports say that only Aircrew and F-14As from Vinson appeared in Top Gun, some footage was shot there.  The Command History for the ship for 1985 has a section on ‘Distinguished Visitors and Media Visits at Sea’ that notes on October 9th-10th:

The Vinson also appears in The Presidio, Behind Enemy Lines, Stealth and Microsoft Flight Simulator.  It is a ship with a truly remarkable, if somewhat chequered history.

Emails from USS Vinson on burial of ‘Bin Laden’