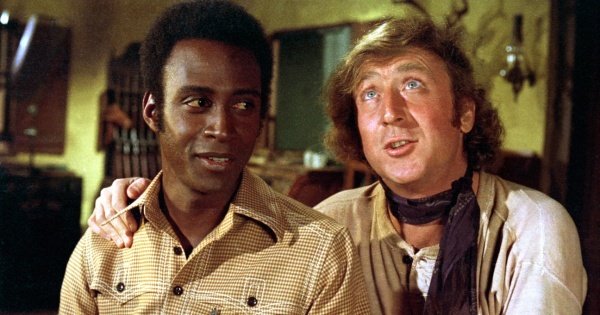 Blazing Saddles, Dick Jokes and Racism in the US Navy

Blazing Saddles is one of the greatest American spoofs of all time, satirising not just Westerns and the whole cowboy archetype but also the racism prevalent in much of Western society.  It remains one of my favourite comedies, and possibly Mel Brooks’ best film.  While the film itself was not sponsored by the state (at least as far as I know) it did turn up in a recent Navy investigation into misconduct by a senior officer.  The exact nature of the complaint involving Blazing Saddles has to be seen to be believed.

Rear Admiral Charles Gaouette was in command of the John C. Stennis aircraft carrier group when Stennis skipper Captain Ronald Reis recorded a series of complaints about his conduct.  Gaouette was removed from that command and temporarily reassigned, leading to all kinds of rumours about military coup plots against Obama or that this had something to do with Benghazi the month before. The Navy’s Inspector General investigated the allegations that Gaouette ‘was an abusive leader’ and that his ‘abusive leadership style created a hostile working environment for the Strike Group staff and Strike Group Warfare Commanders.’  One of the specific accusations was that Gaouette took ‘a photograph of an enlisted African-American male aircraft mechanic onboard STENNIS… and subsequently emailed [it] to six White male senior Navy Captains in the Strike Group. Complainant characterized the picture as “an obvious attempt to solicit stereotypical sexual humor and innuendo.”‘

Reading through the Inspector General’s report it is clear that Gaouette frequently used foul and insulting language and had a tendency to badmouth officers who were unlucky enough to not have been born white.  Most of this amounts to unprofessional bitching rather than racism, but clearly he had some kind of chip on his shoulder.  In the event, Gaouette was not found to have broken any laws or the Uniform Code of Military Justice but he was reprimanded and a copy of the investigation remained on his file.  As such, this complaint and investigation effectively ended his career.

Where this story gets amusing is when we come to the email that Gaouette sent.  The report details how on October 5th 2012 he sent the email to six other officers, all of whom were white, and:

To be fair to Gaouette, the refuelling probe of the EA-6B is quite phallic, particularly when someone is performing the task as described. Note: this is not the actual image

The report goes on:

Subject wrote in his first email conveying the picture he had taken, “I believe this [picture] speaks for itself.” In a second email to the same six officers, Subject wrote: “I see a photo contest. First up: It’s twoo, its twoo [italics added] …. “

The line ‘it’s twoo’ can only be a reference to Blazing Saddles, as Gaouette made clear to the OIG:

The OIG then summarised:

Blazing Saddles, a 1974 Mel Brooks movie, was a parody of the Western movie genre. In the movie, Madeline Kahn plays the part of Lili von Shtupp, a saloon worker hired to seduce Bart, the town’s sheriff, played by Cleavon Little. In one scene, Lili, who speaks with a German accent, asks Bart, who is African-American, “Is it twoo what they say about you people are gifted?” Next, there is the sound of a zipper, and Lili exclaims, “Oh, it’s twoo, it’s twoo, it’s twoo, it’s twoo.”

Basically, it was a dick joke, and not a particularly good one (Gaouette’s, I mean, the original joke is great).  However, the OIG continued to talk around the subject, saying:

We now conclude that the language in Subject’s emails described a racial stereotype pertaining to the anatomy of black males and, when coupled with his reference to the scene in Blazing Saddles, a racial stereotype pertaining to the sexual prowess and proclivities of black males. Consequently, because of the language in paragraph 5 of the SECNAV instruction, we find the Subject’s actions were contrary to Navy’s Core Values.

However, the Inspector General did not find that the complainant was correct that this email contributed to a hostile working environment based on race.  The Navy argued that because the sailor on the plane never saw the email that this aspect of the complaint was unfounded.  As much as I’d like to be able to say that a joke inspired by Blazing Saddles got a US Navy Admiral fired, that isn’t true.  Nonetheless, this has to be one of the most absurd and amusing episodes in the long history of the relationship between the Pentagon and Hollywood.