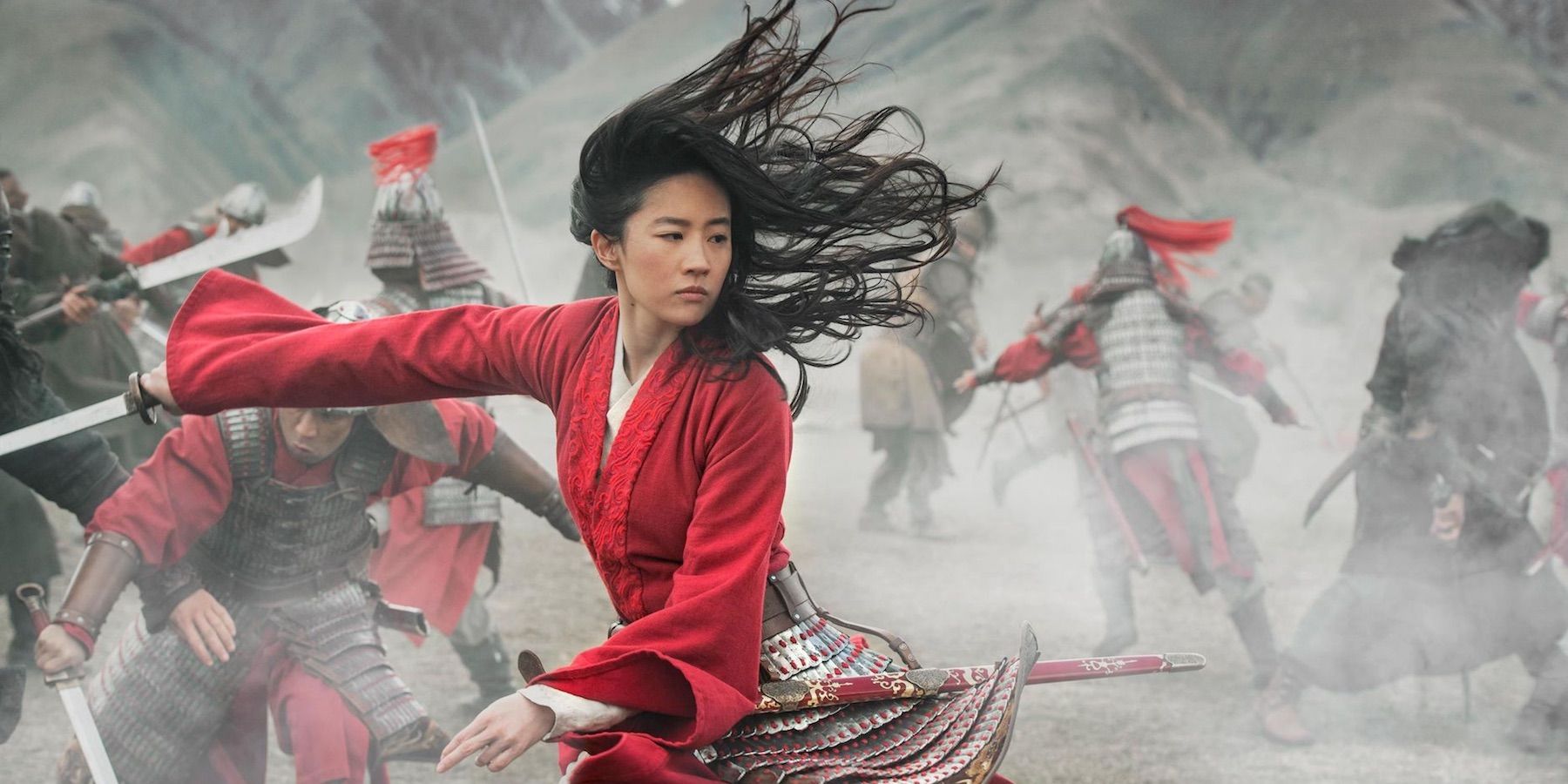 The Hollywood Arms Race took another step towards mutually assured cultural oblivion this week, as the #BoycottMulan movement grew and criticism of Disney’s new Mulan movie grew to a dull roar.  The film is beset by controversy and is meeting with fairly widespread hostility after audiences and critics realised parts of the movie had been shot in China’s Xinjiang province, where the Chinese government is allegedly imprisoning over 1 million Uighur Muslims in internment camps.

The $200 million blockbuster has been released in the US via Disney+, the mousy behemoth’s on-demand streaming platform, but is going on widespread theatrical release in East Asia, with Disney hoping for a mega return from the Chinese box office to compensate for the loss of US theatrical revenues.  As noted by the Hollywood Reporter, the #BoycottMulan movement has been gathering strength, calling on movie-goers to boycott the movie in response to comments by star Liu Yifei praising the Hong Kong police.

This gets into a tricky area, because the wider pro-democracy movements in Hong Kong and Taiwan began as authentic oppositions to the authoritarian central government in Beijing, but at the same time they are being used by the CIA and other Western agencies as a means of a) pissing off the Beijing government and b) generating negative news stories about China to tarnish the country’s image on the world stage.

Curiously, there have been no equivalent calls for boycotts as a result of Nathan Fillion’s comments praising the US police, or in response to John Krasinski, Michael Kelly and others lauding the CIA.  It seems that when a Chinese actress praises an oppressive police state that’s cause for political concern and objections, but the relationship between Hollywood and different branches of the US government is so deeply-rooted that no one gives a fuck.

I am, of course, being sarcastic – most people simply don’t know about that relationship, because media outlets like the Hollywood Reporter give it less than 1% of the coverage they give to the Hollywood-China connection.  This latest dispute is a great case in point, where they reported that:

Disney’s big-budget remake of Mulan, already the subject of a pro-democracy boycott, has come under additional fire for filming scenes in China’s Xinjiang Province, where Beijing is accused of perpetrating human rights abuses against Uighur Muslims on a massive scale.

Not only did Disney shoot in the region, but the studio appears to have offered its gratitude to Chinese government agencies involved in alleged abuses.

Following Mulan‘s release on Disney+ on Friday, some viewers began noticing a “special thanks” in the film’s end credits to eight government entities in Xinjiang, including the public security bureau in the city of Turpan, where China is believed to operate over a dozen “re-education camps” that hold Uighurs in extra-judicial detention.

I will admit, I don’t know exactly what’s happening on the ground in Xinjiang or the extent of the repression of the Uighurs there.  Much like in Hong Kong, the Uighur opposition to the Beijing government began organically enough but has been co-opted by agencies who are happy to use the suffering of the Uighur minority as a means of provoking or encouraging violence against the Chinese government, and as a ‘human rights crisis’ stick to beat China over the head with.

But it is the height of audience and journalistic hypocrisy to notice that Chinese government authorities are credited at the end of Mulan without noticing or mentioning that the US government have supported a much larger number of viciously propagandistic films, and have deployed much more visceral and destructive policies towards Muslims than the Chinese government is doing in Xinjiang.

Take, for example, the 2016 movie Patriots Day, about the Boston Marathon Bombing.  The only Muslims who appear in the film are the bombers themselves – the Tsarnaev brothers – and Tamerlan Tsarnaev’s wife Katherine Russell.  Russell is portrayed as being intimately involved in the conspiracy to murder people at the marathon, and helping to cover up for her husband’s actions after the bombs go off.  This is despite Russell never having been charged in connection with the bombings and there being no evidence against her whatsoever.  This film in particular fed into the notion that any Muslim in America – even a white woman born in Texas – is a probable terrorist, and should be treated with suspicion.

The film was supported by numerous government agencies , both local and federal.  The Boston EMS, Police Department and Fire Department all helped out on the movie, and the producers hired Santa Monica PD lieutenant Sal Lucio as a technical advisor.  At the federal level the FBI, DHS and the DOD all provided production assistance.  The latest document I obtained from the FBI confirmed this, and the film turns up numerous times in the documents I got via several requests over the years to the DHS. 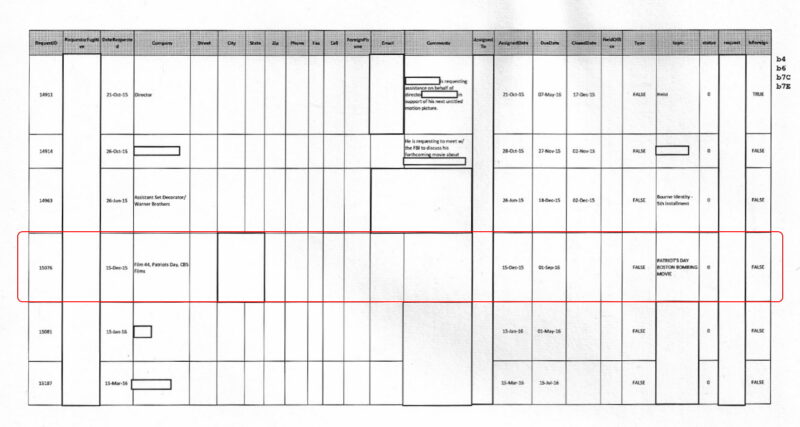 Database of requests to the FBI’s Hollywood office, including Patriots Day

Dept of Homeland Security documents on support to Patriots Day

However, audience members would never realise this from watching the credits roll, because neither the DHS or FBI are mentioned in the credits, only the DOD.  Though exactly what the DOD did, given that they played no role in the story, is not clear.

The credits from Patriots Day, mentioning the Dept of Defense but not the DHS or FBI

Where are the pro-democracy and human rights activists when it comes to boycotting US cinematic propaganda?  Where is the Hollywood Reporter when it comes to the more covert, but much more influential, relationship between Hollywood and the US government?  Why is this relationship given so little coverage, when the influence of the Chinese government on movies is an ever-present in news coverage of the entertainment industry?

FBI – Requests to the Investigative Publicity and Public Affairs Unit, 2014-2018