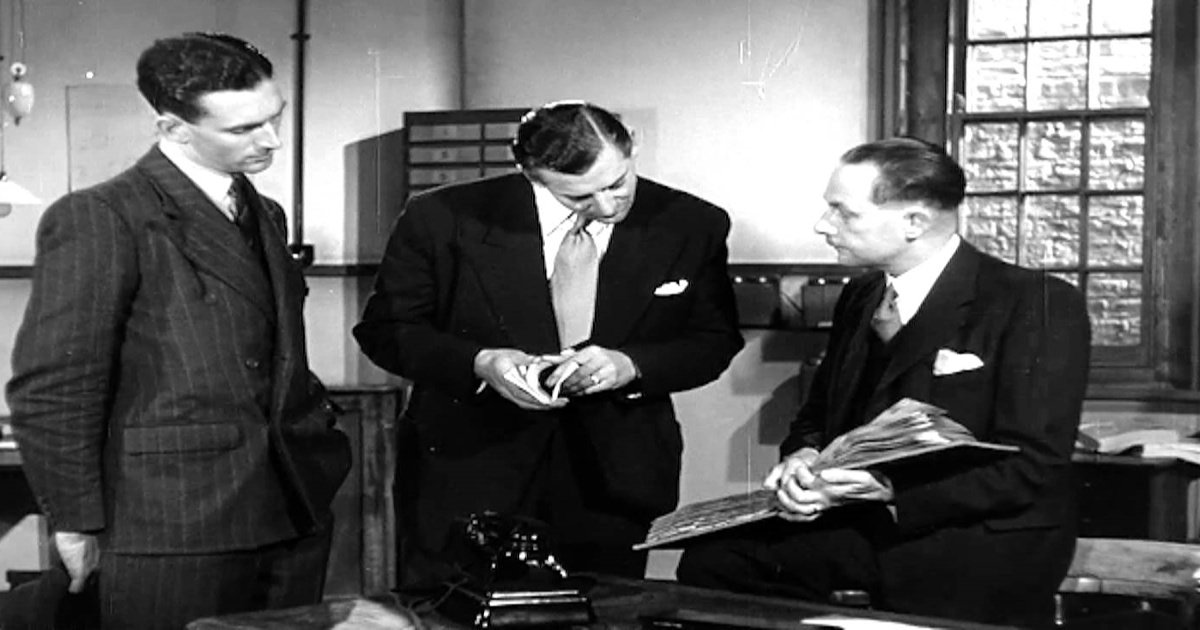 In post-war Britain the Metropolitan Police were concerned about how they were being portrayed in films so they instituted a policy of vetting film scripts.  However, they were concerned that by seeking a more public profile and engaging with the film industry that they would lose the ‘aura of secrecy and glamour’ that had served them so well.

The file contains several minutes sent from the Office of the Commissioner of Metropolitan Police Sir Harold Scott to ‘The Secretary’ – presumably the Home Secretary, James Chuter Ede.  The first, which appears to have authored by the Met’s PIO (Public Information Officer) explains their concerns that:

In no publicity sphere has the work of the police generally been more misinterpreted than on the cinema screen.  I think that this is particularly true of American films, which often entirely misrepresent the British way of life.

While the police did vet film scripts based on real life events and cases, when it came to fictional stories they adopted a hands off approach.  These minutes show that by 1946 they were reconsidering this tactic, and instituted a policy of vetting films scripts as well as encouraging film-makers to submit their scripts to the police.  This would ensure they were not ‘held up to ridicule’.  The minutes also make clear that the Met felt they had brought the press into line ‘slowly but surely’ and now had to do the same with film companies because, ‘Inaccurate films do quite as much harm as inaccurate newspaper reports, probably more.’

That said, one of the minutes raised a concern with the new policy, saying:

I agree that it is sound policy to try to get the Police detail of film scripts reasonably accurate, but I hope it will be possible for this to be done without sacrificing the “aura of secrecy and glamour” which surrounds Scotland Yard and which, in my view, is a great asset to our organisation. l found this very markedly when I was in America a number of years ago.

While by this time British intelligence agencies were a permanent feature of government they had grown out of the Met’s Special Branch – the first head of the Secret Service Bureau was a former Scotland Yard Inspector, William Melville.  The same secretive mentality was part of the founding culture of both the Met and British intelligence.  These documents show that this absence of a public profile was in part deliberate because it contributed to the ‘aura of secrecy and glamour’.  It allowed the public to fantasise about how skilled, competent and effective the British police were.

In reality they forced confessions, fabricated evidence and contributed to numerous miscarriages of justice.  Exactly how long this policy of police vetting of film scripts went on for, and what influence they have over how they are depicted in movies today, is not certain.  So far the Met have refused all of my FOIA requests for relevant information, even though they have now developed a dedicated film unit to liaise with the entertainment industry that employs nearly 300 people.