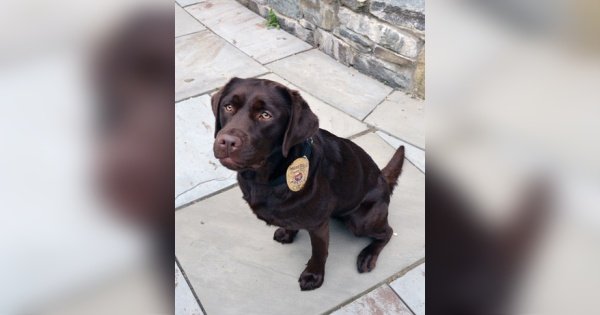 As is being widely reported in the media today, the CIA accidentally left explosives on a Virginia school bus for several days after a training exercise.  During this time the bus continued its regular job of ferrying kids to and from school, all the while with ‘explosive training material’ in the engine block.  The CIA have issued a statement that, in essence, blames their own highly trained bomb dogs for this bizarre and concerning event.

The Agency seem to have a bit of an obsession with their K-9 unit, as they feature a lot of content about them on various parts of their site.  In June 2013 they proudly reported on their blog that:

There are other articles about the K-9s in the CIA ‘Kids’ Zone‘ along with pages on the K-9 Hall of Fame which includes lots of pictures of the lovely beasts who have unwittingly become CIA agents.  Last year their blog included a piece on on the CIA’s Top 10 Dog Training Tips and they’ve even produced videos where Bradley, a CIA dog agent, takes us on a tour of Agency headquarters and explains what the K-9s have to go through in training.

The CIA’s Statement on the Bomb on the Bus

After making 8 runs carrying the 26 students on its usual route the bus was subject to a routine inspection, which is when the explosives (a ‘putty-like substance’ so therefore high grade plastic explosive such as C4 or RDX) were found.  Fortunately such explosives tend to only go off with a detonator and the CIA had managed not to leave a live bomb sitting in the engine of a school bus for a week.  Nonetheless, this incident was alarming enough for the CIA to issue a public statement:

Last week, a CIA K-9 unit conducted a routine training exercise with law enforcement officials in Loudoun County, VA. During the exercise, explosive training material was inadvertently left by the CIA K-9 unit in one of the buses used in the exercise.

You might interpret this as a complete redundancy – that the CIA is confirming that the explosive was left there during the K-9 unit’s training exercise.  I am choosing to interpret it as meaning they were blaming the dogs themselves for leaving the explosive there.

Obviously this is facetious, but dead seriously for a moment I think the CIA are being quite cunning here.  They have built up some good PR through their effective use of articles and videos about cute doggies running around doing brave stuff.  In phrasing their statement like this they are distracting you from a potentially very serious story by phrasing this in such a way that you’re forced to think about the doggies, not who the fuck left explosives on a school bus and why no one at the CIA realised.

Because while the real risk here was minimal, the point is that if the CIA has such a lax culture towards high explosives and making sure they are properly recorded and accounted for, then it would be easy for a small criminal or psychopathic group within the CIA to steal explosives and do any number of genuinely dangerous things.  Indeed, this sort of thing has already happened on lots of occasions (see Operation Gladio, among other instances).

So, enjoy this story, it is a good story with a happy ending but don’t be distracted by the CIA’s framing of it.