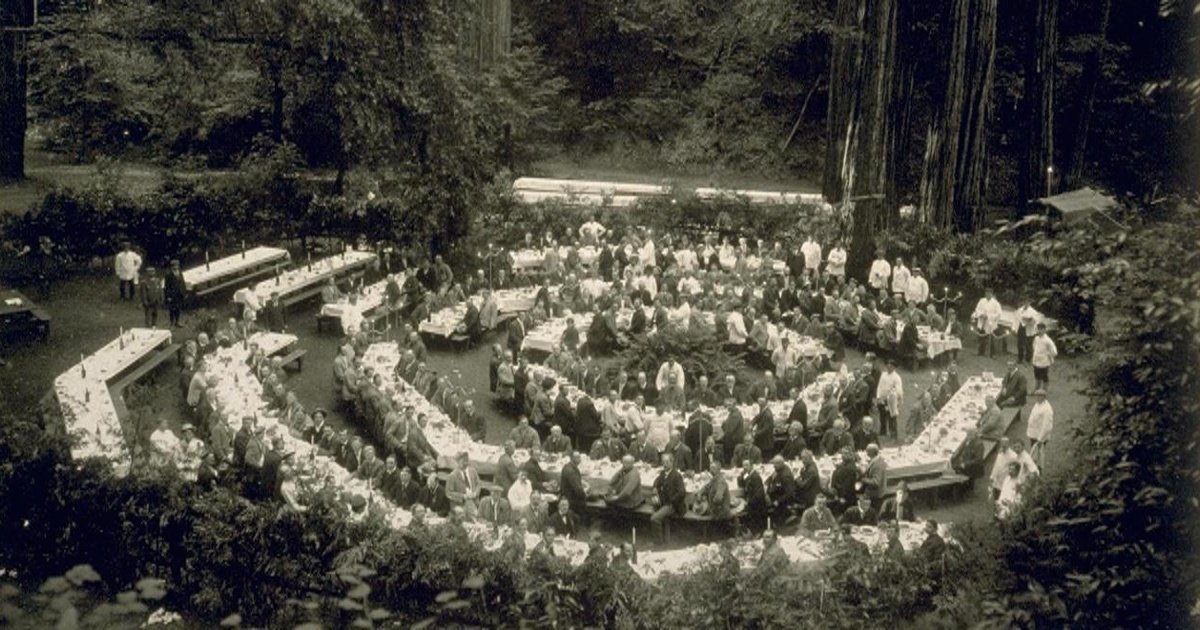 The CIA, Bohemian Grove, Tom Clancy (and the Fake Moustache)

In 1988 CIA director William Webster attended the Bohemian Grove, where he gave a lakeside talk about intelligence matters.  His speech, now available to the public for the first time, is both amusing and at times shocking.  From Tom Clancy to a voyeuristic child who wanted to join the Agency, Webster covered a variety of subjects including the relative merits and demerits of spy satellites vs fake moustaches.  The released document also proves that Webster leaked secrets to the other attendees at the Grove.

Webster has the dubious honour of being the only man to serve as director of both the FBI (1978-87) and the CIA (1987-91).  With the Bureau he was the longest-serving director since Hoover’s death, and helped stabilise the FBI after a period of relative chaos where they’d gone through five different directors in as many years.  Clyde Tolson only lasted a day, James Adams only eight days. With the CIA he took over after Bill Casey’s death and in the wake of the Iran-Contra revelations, and likewise helped steady a wobbly ship.

After retiring from public life he became an inside-the-beltway lawyer, before being appointed Chairman of the Homeland Security Advisory Council in 2005, a position he has remained in until this day.  At a sprightly 93 years of age, the consequences of whatever decisions Webster makes are unlikely to affect him.  One wonders if it might be time for this multiple intelligence-agency-directing secret society member to properly retire, but like Kissinger I expect he’ll keep going to the bitter end.

Webster had attended and given speeches at Bohemian Grove while he was head of the FBI, and according to a much-referenced Spy magazine article he was behind the arrest of a local hotelier who provided prostitutes to Grove attendees:

One day in the Grove, I tipped a camp valet and he offered some unsolicited information. Hookers came to a certain bar in Monte Rio at ten each night, he said. It was the same bar-lodge-motel where the local police had arrested a man for pandering a few years back. The bust came right after a Lakeside Talk by William Webster, then the FBI director, and the timing suggested it was his doing. But the charges were dropped, and the man is remembered fondly in the Grove.

His 1988 attendance was his fourth time, and he began his speech by talking about the differences between his previous visits as FBI director and the present one as head of the CIA.  He made the point that having spent years telling people the Bureau was responsible for law enforcement, not spying, he was now in the opposite position of having to tell people the Agency were spies, not law enforcement officers.

The groups I have talked to have been fascinated by the whole business of spying.  Though I can’t take credit for their initial enthusiasm.  The public has been primed by newspaper accounts, and by a number of popular books on espionage.  One of my officers confessed that he didn’t know where to put his own collection of books on intelligence, but he figured they belonged somewhere between the fiction and non-fiction shelves.

The many stories about intelligence vary of course in style and authenticity.  The other day at a National Security Council meeting the President turned to me and said, “Bill, I’ve just been reading Tom Clancy’s new book The Cardinal of the Kremlin, and the CIA is in trouble.”

Webster went on to describe the many applications the CIA receives as a result of this enthusiasm for spying, including a letter he’d received from a young boy who seemed addicted to spying on his neighbours and relatives:

I also heard from a young American with big plans. He wrote.”Dear CIA. I am 12 and have been spying since I has 9… I am the leader of three kid spying-clubs and I specialize in making codes and breaking codes. I spy around my neighborhood and on my parents. I know a lot about spying and I love to do it. When can I join the CIA?”. A real professional. The youngster also sent me his business card.

He went on to way lyrical about the importance of intelligence, not just for the US government but also for NATO and NORAD, how his own ancestor had been a spy during the Civil War, and told a very funny story about a fake moustache:

I have seen the marvelous devices that can de used in the interests of tradecraft. But I also know that nothing is foolproof. I was recently told of a young officer who was meeting his agent in the dark 0f night in a strange land somewhere east of Suez. The two were driving through 105 degree temperature –something like Washington this summer — and the officer was wearing a considerable head of hair (which belonged to him) and a mustache (which belonged to us). This night, as they drove steadily through the muggy air, our man felt the perspiration running off his brow, down his face and over his lip.

Finally: our mustache dropped in his lap. Unperturbed, our man drove on. His agent, in a calm, unhurried manner noted, “Sir, your mustache has fallen off!” The case officer made the only decision a man of “Savoir faire” could make — a brief, “Aha, so it has.” He reached onto his lap, picked up the mustache and put it in his breast pocket. We may Have satellites that circle the globe. But the secret of an effective spirit gum still eludes us. The gates leading into Bohemian Grove

Perhaps the most surprising aspect of Webster’s speech is that he leaked national security secrets to the gathered crowd.  He mentioned that, ‘We have had a number of major successes this year’ but the following several paragraphs are redacted.  What did Webster tell Bohemian Grove members in 1988 – many of whom were not members of the government nor had the necessary clearances – that we are still not allowed to know 30 years later?

But I want to emphasize that how the CIA carries out its responsibilities is of equal importance to our country. We must maintain absolute fidelity to our constitution. To our laws, and our rules – rules imposed to ensure our citizens that we are accountable. I do not think that the CIA is exempt from this principle. In fact. I believe that it is the key to public acceptance of our vitally necessary work.

He went on for several pages about the need for the CIA to be answerable to Congress and the importance of laws governing CIA covert actions.  While Webster may have been sincere in these statements, they smack of a naivety regarding the agency he was in charge of at the time.  After all, if we cannot even know what he told a private meeting of people 30 years ago, let alone what the CIA was up to at the time, then how can the CIA be accountable?  They always have the protective cloak of institutional secrecy to hide behind. If they don’t tell Congress about something then 99 times out of 100 Congress simply won’t find out.

Webster did find time to cram in one more amusing anecdote before the end of his speech:

We cannot anticipate all the demands that will be made of us. No matter how or where we serve. One day, the leader of the military band at a major U.S. International command called CIA headquarters to see whether the Agency had the score of the national anthem of a small African country. One of the senior leaders from that country was paying the command a visit. Sure enough, our library had the national anthem and told the band leader so. There was a long pause on the telephone while the band leader was presumably thinking how He would get the necessary music. Finally, he blurted out: “Could you sing it to me… please?”