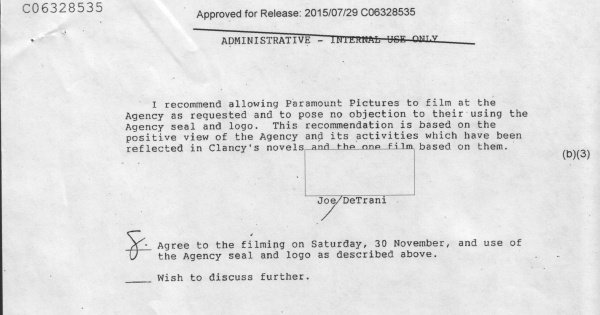 1992’s Patriot Games was one of the first major films to receive explicit CIA production assistance. It is well known that Tom Clancy, the author of the book, had a positive relationship with the Agency.  Clancy’s books finally achieved a long-held Agency ambition – to provide a CIA-friendly equivalent to the James Bond franchise. However, despite CIA and DOD assistance in their productions, the Jack Ryan film brand has not had the same impact on popular culture.

When Tom Clancy died nearly 2 years ago I filed a large number of FOIA requests with various US government agencies. While the DIA responded quickly the CIA took until this week to get back to me. I have since had several requests to the CIA dealt with (in one way or another) but for some reason this one was severely delayed.

I asked for all documents pertaining to assistance given to Tom Clancy in the writing of the books, and to the producers of the various film adaptations in the making of those films. I received, after nearly 2 years, 3 documents, 2 of which are letters from Paramount to the CIA. The third is an internal memo advising that the filmmakers should be granted assistance in making Patriot Games.

The redactions in these three documents are bizarre – the date of one of the letters is covered up, as is the name of the CIA officer they are addressed to, as is the name of the location manager working for Paramount on Patriot Games (the person who was writing to the CIA).  We can establish via IMDB that Patriot Games had three location managers working for it – Rachel Neale, Stuart Neumann and Peter Novak, so it must have been one of them.  Why is this information not something the CIA can release to the public?

Letter from Paramount Pictures to CIA

The production crew visited Langley and were given a tour and some background information in July 1991.  These letters, from October ’91, ask for a second visit so they could take another look at the lobby of the old headquarters building, where they intended to film.  The CIA granted permission for this second visit, though exactly who attended is redacted:

Letter from Paramount Pictures to CIA

We can also deduce that Harrison Ford must have been among the group that visited in late October 1991, because the CIA memo on assistance to Patriot Games makes this distinction between the July visit and the October visit: In any case, DeTrani must have worked in the Public Affairs Office when he sent the memo, whether or not he was actually serving as director.  One wonders at why the name of the location manager for Patriot Games was redacted but the name of the CIA officer handling the project was made available to us.

This is how the CIA were operating in 1992 – over 20 years ago now and before they even established a formal entertainment liaison office.  Since then their operations have evidently become a lot more sophisticated.  The full blown entertainment liaison office.  The deep relationship with Sony Pictures.  The rewriting of Zero Dark Thirty.  Using balloons to ship hundreds of thousands of copies of The Interview into North Korea.  These are not the behaviours of a few people sitting in Hollywood reviewing a few scripts and inviting a few filmmakers to Langley.  However, in the modern era at least, this is pretty much where it started, and so these documents are a meaningful record of an important moment in history.