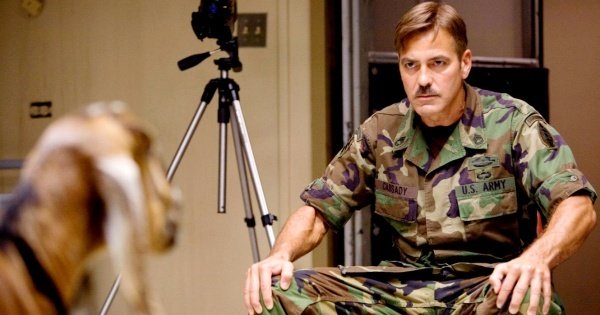 The CIA and Hollywood 11 – The Men Who Stare at Goats

Jay Dyer joins us for this episode where we analyse the 2009 comedy The Men Who Stare at Goats, loosely based on Jon Ronson’s book of the same name.  It tells the story of a journalist who is inducted into the world of psychic soldiers during the Iraq war.  The movie goes on to explain some of the history behind the First Earth Battalion, an experimental Pentagon unit devoted to developing a new generation of super soldier informed by the hippy and New Age movements.  We examine what the film leaves out, especially in the form of MKULTRA and similar CIA projects and experiments with similar aims, and ask whether the purpose was not to explore ‘How could love and peace help win wars?‘ but to weaponise New Age philosophy and the New Age movement.

The Men Who Stare at Goats is the final movie in the George Clooney/Grant Heslov series before they took the full plunge and made Argo with the help of the CIA.  We look at whether Goats – Heslov’s directorial debut – was the final step in their long-term overture to the CIA.  The fact that Goats reduces the CIA’s involvement in such projects to a single scene, and was distributed by none other than Overture Films are strong hints towards this.  We also map out the evidence and implications of state sponsorship of the entire Goats project, from Ronson’s original book and documentary series through to the Hollywood version.  The use of technical advisors who were part of these Pentagon units back in the 70s/80s and who were ‘reactivated’ to help fight the War on Terror implies that at least the DOD, if not the CIA, were in favour of this film.  We round off by pondering the plausibility of the remote viewing phenomenon.

The Men Who Stare at Goats (book)

The Men Who Stare at Goats (film)

Goats Declassified: The real men of the First Earth Battalion