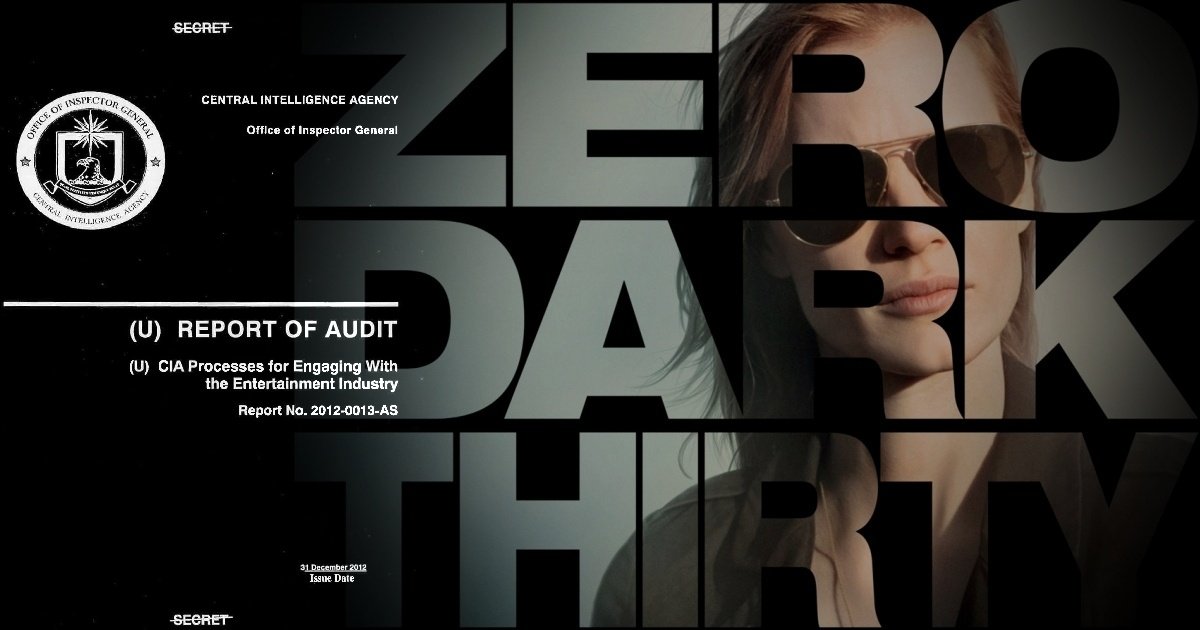 In the wake of the scandal over the CIA giving classified information to the makers of Zero Dark Thirty the Agency’s Office of the Inspector General (OIG) carried out an audit into their involvement in the entertainment industry.  The report heavily criticises the CIA’s entertainment liaison office (ELO) for terrible record keeping and a very casual culture.  What emerges from this report is that the ELO care more about being secretive concerning their own activities than they care about protecting the secrets of other departments within the CIA.

Mark Boal and Kathryn Bigelow were already working on a film called Tora Bora when news came in of SEAL Team Six and their ‘bold, gutsy raid’ on a ‘compound’ in Abbottabad that had supposedly killed Osama Bin Laden, the leader of Al Qaeda.  Though one wonders, even if this story is true (it probably isn’t) then how dangerous can one isolated old man living in secret really be and does this necessitate or justify an extra-legal military operation on foreign soil?  Fortunately the CIA’s own Homeland is there to put you straight just in case you had any doubts that Bin Laden really was killed in May 2011:

Almost as soon as the Abbottabad raid was announced Boal and Bigelow began adapting their film into a wider tale of the ‘world’s greatest manhunt’ culminating in the raid that ‘took down Bin Laden’.  They were already in contact with the CIA so it was a simple matter to ask them for help on the new script.  The Agency complied, inviting them to tour secret ops rooms and visit the mock-up of the house in Abbottabad that was used for rehearsals by Special Forces.  Boal was even allowed to attend a ceremony at Langley where the members of SEAL Team Six were recognised and honoured for their role in the operation.  The SEALs’ real names were used at the ceremony, enabling Boal, a Hollywood screenwriter, access to information classified as SECRET (‘its unauthorized disclosure would cause “serious damage” to national security’).  In return for this extra access and help, Boal allowed the CIA to rewrite various scenes in the film.

Much of this collaboration was revealed in columns by Maureen Dowd, an inside-the-beltway journalist who was herself being spied on by the CIA because of the articles she was writing on their involvement in Zero Dark Thirty.  This led to Representative Peter King raising objections and kicking up a fuss with both the CIA and DOD.  The DOD had comparably little involvement in the movie so the focus was primarily on the Agency.  This led to a series of internal reports: one on the leaking of classified information, one on more general ethics violations (such as CIA officers being taken on shopping sprees to reward them for assisting on the film) and this review of the CIA’s Office of Public Affairs (OPA), in particular the behaviour of their ELO.

Conservative foundation Judicial Watch, who have pursued the CIA over Zero Dark Thirty for several years, recently published the report on CIA Processes for Engagement with the Entertainment Industry.  While it is briefer than the other internal CIA reports obtained by Vice it is a considerably more interesting read.  It mentions that in 2011 the OPA drew up a list of productions it had worked on since January 2006, comprising 22 titles including books, films, documentaries and TV shows.  Some of these are known – Homeland and Zero Dark Thirty are the two most obvious – but most are not known, so a FOIA request has been submitted asking for this 2011 list.

The OIG looked at 8 productions out of these 22, though details of the 8 are redacted, save to say there were 2 of each type of project (books, films etc.).  They found that in 3 cases the ELO had no records whatsoever of their involvement and engagement in the project.  The other 5 provided ‘only limited’ records.  Apparently the OPA has now implemented a new database system that will make it easy to search for records of recent projects they have supported.  And also means that their FOIA office will have to stop pulling this ‘what, who, me?’ bullshit with requesters like myself.

When it came to whether the OPA/ELO were behaving in keeping with their own regulations the OIG found that:

The lack of accountability here is typical of intelligence organisations but if even the CIA’s own internal investigator the OIG cannot access relevant materials on what the hell the OPA/ELO have been up to in the post-Chase Brandon period, then what hope is there for the rest of us?  Though, ironically, the OIG’s report largely echoes what Matt Alford, Tricia Jenkins, Pearse and myself (and a few others) have been saying for some years.

When it came to the casual attitude towards classified information the ELO excelled themselves.  While the level of involvement in the five projects for which there were documents varied considerably, the OIG noted that meetings between current CIA officers and representatives from the entertainment industry:

* Sometimes involved the officers being ‘under cover’

* Often took place without anyone from the OPA/ELO being present

In short, we have currently serving CIA officers running around off campus, in disguise, meeting with people in the entertainment industry without any record of the meeting or anyone in a position of responsibility being present.  There are two ways to look at this – the OIG’s interpretation is that this speaks to a lax attitude towards the CIA’s secrets; and my way, which is that this also speaks to a culture of secrecy at all costs with the OPA/ELO, even at the cost of other CIA secrets.  They clearly did not want to leave much of a trace of what they were up to between January 2006 and April 2012, when the OIG’s audit took place.  This appears to have overridden other concerns, such as ensuring that officers from other departments were effectively briefed before they met with writers and producers, and ensuring that there was someone there to monitor the meeting.  These basic practices were not adhered to because, I think, the OPA/ELO covering their own trail was more important to them than whether some CIA officer might accidentally let something slip.

This is demonstrated aptly by the question of how Mark Boal ended up at a high-level ceremony mixing with senior CIA officers and members of SEAL Team Six.  The OIG’s report into that specific issue concluded that they couldn’t establish who invited Boal, or whether Leon Panetta knew he would be there and thus was guilty of allowing a Hollywood screenwriter to access classified information.  The OIG cannot answer these basic questions, let alone the more interesting question of why the OPA/ELO wanted Boal to be there and whether this was some kind of initiation or reward for rewriting his film to suit their agenda.  The excuse given was that he was there to ‘absorb the emotion of the event’, which could mean anything.

Why was Boal allowed to go to the Bin Laden raid ceremony?

Do the OPA/ELO care more about covering up their activities than the potential for others under their watch accidentally leaking secrets?

What are the new procedures that were put in place in 2012?

What, exactly, are the CIA up to in the entertainment industry?

Will we ever get substantial information out of the OPA/ELO when the CIA’s own OIG couldn’t?