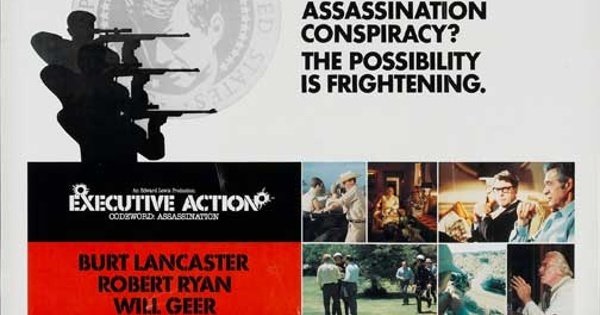 Executive Action is perhaps the most famous conspiracy thriller about the John Kennedy assassination, with the exception of Oliver Stone’s JFK.  Recently released CIA records in the CREST database show that they were keeping an eye the production and how it was being received.  The articles even detail how the CIA may have threatened or tried to stop the production of the film.

Pearse and I discussed Executive Action at some length in our review of the film – it tells a story of a private, ultra-right wing corporate conspiracy to assassinate JFK and set up Lee Harvey Oswald as a patsy.  The CIA records on the movie are all newspaper articles collected via their Open Source Center.  All five documents include handwritten notes in the top right corner recording that the story was about Executive Action, showing that the film was a concern for the Agency.

Why were the CIA worried about Executive Action?

Several of the stories emphasised how the film was driven by left wing ideology, seeking to exonerate the communist Oswald and blame right wingers instead.  One from The Pink Sheet listed how the major stars and producers had left-wing sympathies: Interestingly, two of the writers were subsequently sued by CIA agents – Mark Lane for his allegations that E Howard Hunt was in Dallas on the day of the assassination (something Hunt later confessed to for unknown reasons), and Donald Freed for his book Death in Washington which alleged that David Atlee Phillips was involved in the 1973 Chilean coup d’état, the 1976 assassination of Orlando Letelier, and the JFK assassination.  The CIA also monitored developments in both of these legal cases.

Several of the stories highlight how the CIA were reputed to be concerned about Executive Action and were trying to interfere or even stop it from being made.  One New York Times report noted that:

The producer is trying to withhold more detailed in formation about the production until shooting is completed in two or three weeks. According to his press representative, Steve Jaffe, there have been rumours of Central Intelligence Agency interest in the project, and one crew member reported a C.I.A. threat to sabotage the production…

…Mr. Lane, author of “Rush to Judgment”—one of the earliest and most controversial critiques of the Warren Commission report—supplied much research material for “Executive Action.” Both authors traveled extensively, and talked to C.I.A. informants and other witnesses while working on their script.

Whether these stories are accurate is not certain, though the film was heavily criticised on its release and was quickly removed from theatres.

Glad You Asked About That – Executive Action

Terrorism – Made in America