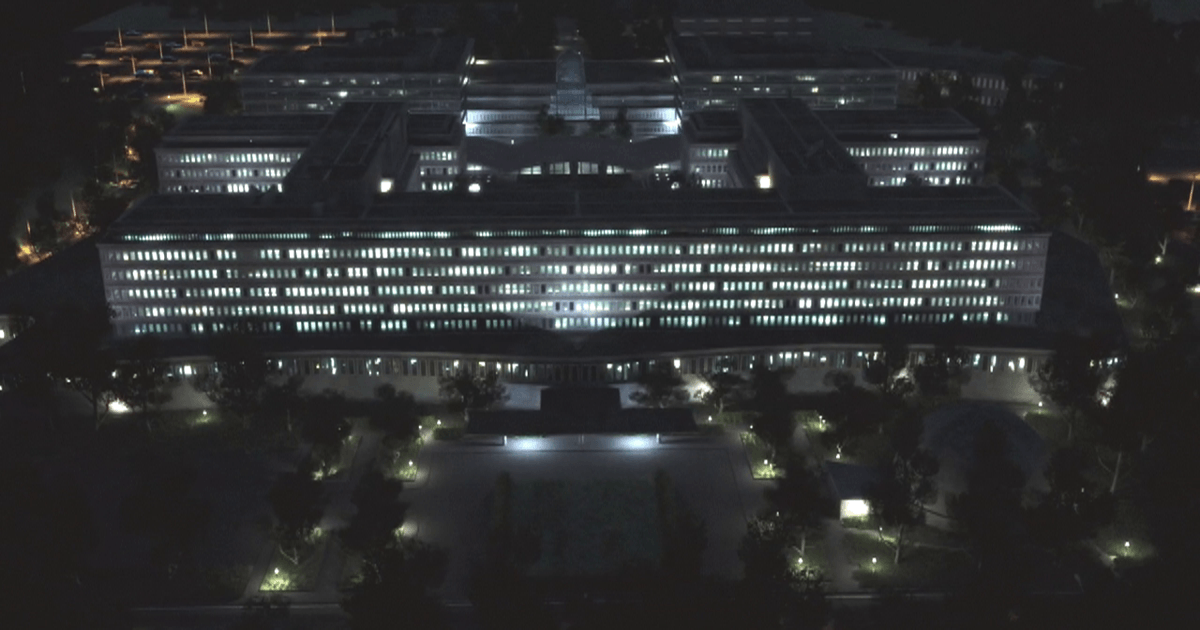 Have the CIA relaxed their rules about filming Langley?

In last weekend’s ClandesTime I discussed how the CIA no longer allow film-makers to shoot footage of the CIA headquarters, leading the producers of Mission: Impossible – Rogue Nation to re-use old footage of Langley, but it appears they may have relaxed this rule and are now allowing filming, or at least providing newer footage to entertainment producers.

The 2012 CIA Office of the Inspector General (OIG) report into Agency engagements with the entertainment industry said:

CIA officials directly involved in supporting entertainment industry projects told us that, since 11 September 2001, there has been only one major motion picture that has been allowed to film at CIA Headquarters.

They are presumably talking about Argo, where Ben Affleck (playing CIA agent Tony Mendez) is seen driving up to the old headquarters entrance and going through the door and into the headquarters.  This is basically the same sequence that appears in Scorpio and Patriot Games, both using the real CIA building, and The Recruit, which recreated the lobby on a soundstage. However, numerous other productions have included aerial establishing shots of Langley including Homeland, Zero Dark Thirty and the Bourne trilogy.  The similarity of this footage, across both film and TV projects produced by a range of studios, means that it must have been provided by the Agency’s entertainment liaison office.  It seems that following the debacle that was Dying of the Light (the last Hollywood movie to shoot at Langley) the CIA closed ranks and stopped considering requests for filming at the CIA campus.

I recorded the ClandesTime explaining all of this a couple of weeks ago, before I watched both seasons of the (relatively) new TV series Shooter.  In the final episode of the first season there is an establishing shot of Langley.  However, unlike the footage in every other CIA-supported production I’ve ever seen, the film for Shooter was shot at night. Almost all other film of Langley that appears in films and TV series was shot during the day, though for the Bourne Trilogy they did something a little different.  The trailer for The Bourne Identity included a shot of CIA headquarters in half-light, what appears to be dusk during winter:

This shot doesn’t appear in the film itself, which instead uses wintry footage shot during the day, and the apparent ‘dusk shot’ from the trailer was used for The Bourne Supremacy.

Langley shot from The Bourne Identity

For The Bourne Ultimatum the CIA provided yet more footage, this time rising out of the trees to South East (the bottom left as you look at the image above).  The Ultimatum video also seems to have shot at dawn during considerably warmer weather than those in the first two films.  There is no frost on the ground or on the buildings themselves.

From this we can deduce that all three of the original Bourne trilogy enjoyed some kind of support from the CIA.  Given that Doug Liman directed the first film and produced all three, and went on to make the CIA-assisted Fair Game and Covert Affairs, and most recently directed American Made.  We can also deduce that Shooter was somewhat supported by the CIA, who also allowed use of the floor seal for a reconstruction of the headquarters lobby: We can also deduce that the ban on filming at Langley is likely still in effect, but that the CIA are once again providing footage of their headquarters to entertainment producers.  They appear to have quite a library of video – dawn, midday, dusk, night, in both warm and wintry weather.  They also have a bunch of angles to choose from, including this one sweeping low past the Northern end of the old headquarters building that was used in American Ultra. Indeed, this all dates back to the late 1970s, when Stansfield Turner took over as head of the CIA with a mandate to change their public image.  They set up an Office of Public Affairs and soon enough crews from CBS (news) and MGM (Telefon) were allowed to film on site at Langley.  However, requests for video footage then started flooding in, and while Turner was broadly in favour of opening the CIA up in this way, concerns over security and the time/expense of clearances for dozens of film crew staff led to opposition from other senior officials.

They eventually opted to produce their own in-house catalogue of footage to be provided in response to requests to film at Langley.  One group of memos from 1977 shows how Turner wanted to approve requests but others resisted, leading to the compromise and the CIA producing its own stock footage.  As one memo put it:

We supply stills; why not film? By having stock footage available to requestors, either free or at cost, we can justify refusal to permit crews into the compound.

Indeed, in total only about half a dozen film crews have been permitted access since Scorpio in 1972/73, so for the most part the CIA have maintained the same strategy for decades.