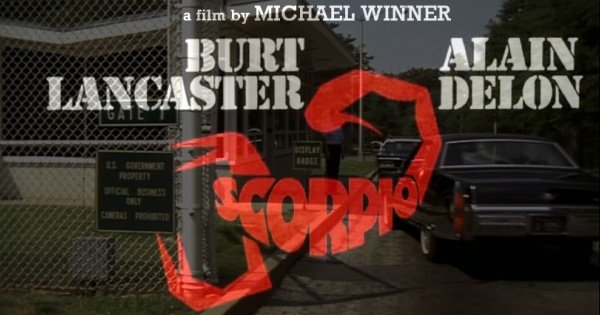 While the CIA have been assisting films such as Scorpio for decades they maintain very few records of their involvement in these productions, making it difficult to know how influential the Agency is in this arena.  A different but somewhat fruitful angle of inquiry is in the CIA’s records of the media discussion of spy books and films in the form of reports, reviews, ratings and discussions.  Files resulting from their open source monitoring of this media coverage shows that spy fiction is a topic the CIA have obsessed over throughout their existence.

Scorpio is a relatively unremarkable 70’s spy thriller that does little to stand out in a period that includes controversies like Executive Action and masterpieces like Three Days of the Condor.  However, it was the first movie to be granted permission to film at CIA headquarters in Langley.  In spite of the script not portraying the Agency very well and screenwriter Gerald Wilson being a suspected communist, Richard Helms gave the OK for filming.  According to TCM:

CIA director Richard Helms approved the clearance of Winner and his 200-man crew, for whom he allotted CIA identity badges that were nearly identical to the real thing. There’s something very familiar about all this…

While they were shooting in and around Washington DC director Michael Winner was staying at the Watergate hotel, at the same time that the ‘Plumbers’ broke in on behalf of the Nixon White House.  This is likely just a coincidence, but given that the Plumbers were mostly former CIA men who were being run by an Agency supervisor named John Paisley, one wonders if there is more to it.  The producer of Scorpio was Walter Mirisch, who some have speculated was involved with the CIA and was certainly an associate of Gary Devore.

The CIA Spying on Scorpio

There some documents on the CIA’s CREST database that mention Scorpio that I have requested, and the film was mentioned in the farewell address of Vernon A Walters – a 35 year CIA veteran who rose to Deputy Director and was Helms’ temporary replacement for a couple of months in 1973.  One document I do have on Scorpio is a transcript of a radio interview about the filming of the movie.  WWDC Radio sent Betsy Ashton to the on-location filming in Georgetown to interview Michael Winner and other members of the crew. The transcript of the show was sent to the CIA’s Public Affairs Staff by Radio TV Reports Inc. – a media monitoring/archiving company who were used regularly by the CIA during this period.  They also provided transcripts of media broadcasts to British Information Services, the information department of the British consulate in New York.  Other transcripts from Radio TV Reports in the CIA’s records include TV items about Reinhard Gehlen, the CIA losing one of their Air America planes over Laos and Alfred McCoy’s book about Air America being used by the CIA for drug trafficking.

By comparison, a radio report about the filming of a Hollywood movie might seem quite trivial, but clearly the CIA were concerned enough to order a copy of the transcript from Radio TV Reports.  The content of the radio piece was relatively humdrum, with Winner explaining that they were having issues with shooting the scene in the picture above, because the stuntman either broke too much of the Cadillac’s windscreen or not enough.  She then spoke to Richard Maber, who was doing press and publicity for the film.  He said:

Well, it’s been a nice film for us because we travelled to Washington, London, Vienna, Paris at the best times of the year in each city.  No question that it’s hard work.  It’s a four or five million dollar CIA thriller in that it’s an intelligence spy film.  Burt Lancaster does not have magic rays in his left hand coat pocket or anything.  We tried to get it as real as possible.