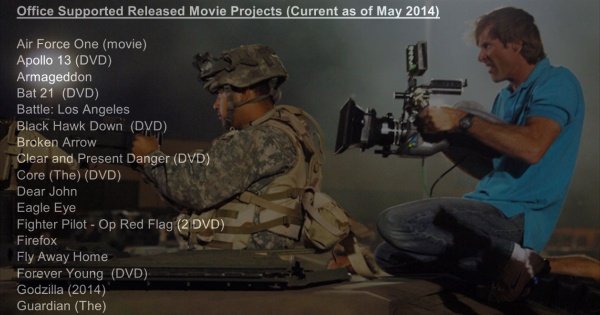 The latest response to my series of FOIA requests has come from the US Air Force, who have provided me with a list titled ‘Office Supported Released Movie Projects (Current as of May 2014)’.  Unlike the DOD list, it is in text format and even in alphabetical order.  Like the DOD list, it poses some questions.

For one thing, it includes One Man’s War, Taking Chance and Over There, all of which are TV not movie productions.  The Air Force list also includes Pearl Harbor – which was missing from the DOD’s film list.  The presence of children’s movies Fly Away Home and Home Alone 3 are somewhat disturbing, and while the DOD list goes back to the 1910s there appear to be no movies on the Air Force’s list from before approximately 1980.  The Air Force were involved in movie production at least as early as World War 2 (see productions like Air Force and I Wanted Wings) and even had its own film production unit (the First Motion Picture Unit).

The general theme running through most of the movies on this list is perhaps unsurprising – hi-tech, if not overtly transhumanist.  Both versions of The War of the Worlds, multiple entries in the Terminator, Iron Man, Transformers and Star Trek franchises  – even the Mel Gibson vehicle Forever Young had assistance from the USAF, along with the utter schlockbuster The Core.  You can download the list here (PDF).