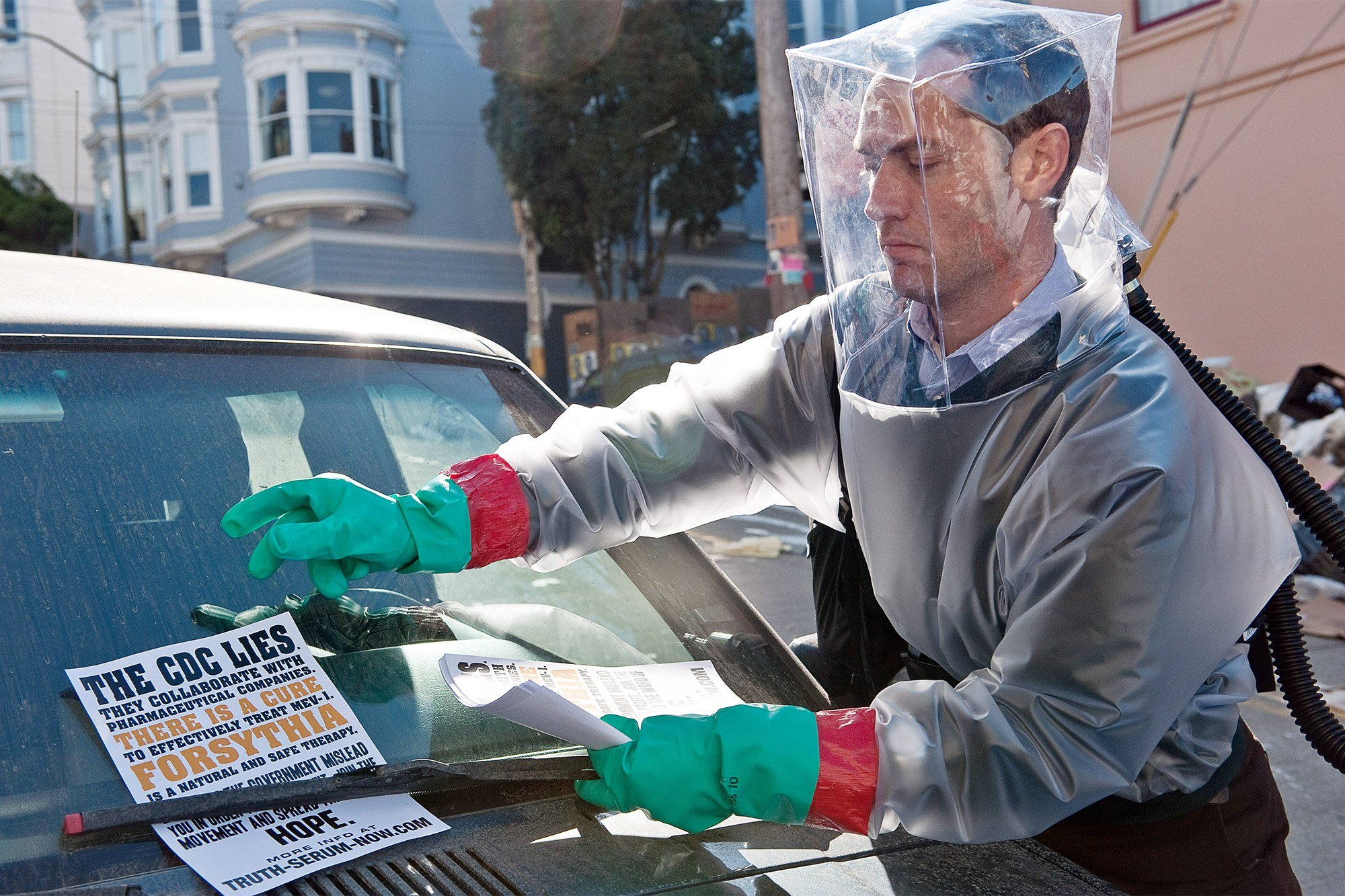 Coronavirus, Contagion and the Security State

The mass media feeding frenzy over the spread of coronavirus has sparked a range of predictable but weirdly connected consequences.  The 2011 pandemic thriller Contagion and other killer disease movies like Outbreak have shot back into the top 100 iTunes movie rentals, while efforts to roll back some of the mass surveillance provisions of the Patriot Act might be sidestepped by the coronavirus spending bill.  But the connections between these two phenomena are more profound than you might think.

As things stand at the time of writing, coronavirus has killed 3,000 people worldwide – approximately 1/6 of the number of people who have died from flu this flu season just within the US.  As with all such viral outbreaks originating overseas the Western news media has latched onto coronavirus like a limpet mine on a submarine and used it to scare the hell out of people and demonise target governments (most obviously Iran and China).  Statistically, you’re quite likely to get coronavirus if the spread continues as it has done for the last several weeks, but you’re still far more likely to die of cancer, in a road traffic accident or of dementia.

Indeed, you’re more likely to get cancer and then get run over by someone with dementia than you are to die of coronavirus.

In other statistical news, Contagion shot back up into the top 10 movie rentals on iTunes, and currently stands at 11th place.  Outbreak is at number 82 and 12 Monkeys is at 52.  Though it should be said that this ranking list makes little sense – currently both versions of Total Recall are in the top 100, as are Matrix: Recycled, Battleship, District 9 and Vanilla Sky.  In particular the latter confuses me, because it’s such a horrible film I cannot imagine anyone wanting to rewatch it.

Meanwhile The Intercept are reporting that efforts to temper or remove some of the mass surveillance authorisations from the Patriot Act might have hit a roadblock in the form of the Trump administration’s anti-coronavirus spending bill.  The mass surveillance provisions have to be renewed by March 15th or they expire, but plans to hold a vote on these specific provisions have been thrown a curveball in the form of attaching them to the coronavirus bill, which is sure to be passed.

House Democrats have been working on plans to further amend a provision of the Patriot Act, which as of 2015 provides a way for the government to get American citizens’ phone records from telecom companies. This and other key provisions of the Patriot Act must be reauthorized by March 15, or the surveillance authority lapses. The Democrats’ amended bill would pull the provision’s authorization while allowing and tweaking other other ways the government collects records.

But those negotiations have been thrown off track, with critics of the spying program alarmed by the possibility that congressional leaders may try to use the coronavirus outbreak — and the coinciding legislation to fund a response — as a vehicle to muscle through an unamended extension or reauthorization.

The Trump administration’s request for $2.5 billion to mitigate the coronavirus pandemic is likely to become an unstoppable legislative vehicle — as must-pass legislation that congressional leaders of both parties could use to ram through a reauthorization of the FBI’s call detail records program. Such a move would sidestep the House’s reform effort and instead push through a clean reauthorization of the program.

The Senate, said a Democrat on the House Judiciary Committee, is “threatening to put that clean reauthorization into something like coronavirus funding which would make it impossible to defeat if we don’t come up with a bill here. Pelosi and Schiff will never allow it to expire.”

This isn’t the first time that a widespread health scare (even a fictional one) has been used to protect and enhance the abilities of the security state.  Going back through the CDC documents on their support to Contagion they echo many of the equivalent files from the CIA, DOD and elsewhere.  They describe the film as the ‘CDC’s Top Gun‘ and comment on how it should help with recruitment.  Another document says:

We will all benefit, through budget potentially and image and respect, for this portrayal.

The CDC files are replete with the language of an intelligence agency – ‘surveillance’ appears on multiple occasions, and is a term that features frequently on the CDC’s website.  They call their staff ‘officers’ just like the CIA, and in one discussion on promotional efforts around the movie they talk of the importance of ‘security themed messaging’.

In one particularly cynical exchange they hoped that the film would come out around the 10th anniversary of 9/11 and the subsequent anthrax attacks so that the promotional events they were participating in would coincide with these anniversaries.  The emails say that their messaging should reflect this – effectively saying they should exploit the heartbreak over the deaths in the 9/11 and anthrax attacks to further the CDC’s agenda.

A further set of emails record how the film provoked a request from the State and Foreign Operations committee asking about whether the CDC’s funding was sufficient, and how the CDC were seeking to exploit this opportunity as well:

FYI/Heads up: CGH, OFEA and others will be meeting at 8:45a tomorrow to prep for a joint by GHI team (CDC, USAlD, others) to Senate appropriations staff for State and Foreign Ops (+Senate LH HS staffers) possibly on Thurs at 9:30 am. I’ll be working with Sonya and the Team Leads (will include Kathy via email).

See full background info in email below from Kemy Monahan… Note we need to provide our outline of TPs by 4 pm tomorrow to broader group, but have to coordinate with USAID/others in the meantime. For now, pls send me whatever info you have — we’ll figure out coordination details when we talk tomorrow morning.

We have two tasks — For #1, we’re the lead, for #2, i think we have to fall in line behind whatever direction we get from S/GHI and USAID given that most of our funding comes from them.

1. Prompted by the movie “Contagion”, (mostly Republican) Senators are concerned with whether we are spending enough on pandemic prevention.

2. They would like to have us provide (in writing and in briefing) clear global health impacts if cuts are made.
– We don’t know the specific methods for estimating the cuts, but we expect it’s a comparison of FY 12 House Mark to FY 11 enacted (ie cut of $700M). Challenge is figuring out how to allocate those cuts. USAID is thinking about looking at what their funding levels were in FY 09 (comparable figures??) but they’re waiting for guidance from “F.”

A decade ago, the CDC recognised the value in media hype around pandemics as a valuable method of extorting funding and authority from Congress, and now coronavirus (which doesn’t even come close to epidemic levels as yet, let alone pandemic levels) is being used to help the CIA, NSA and their sister agencies continue to spy on people on an unprecedented scale.

While the Trump administration deserve criticism for this ploy it’s highly likely the idea did not originate with them.  Firstly, because the game of exploiting death and fear to enhance budgets and power is at this point very well-established.  Secondly, because the Trump admin aren’t that clever, but the CDC and CIA obviously are.

Like with previous 21st century mass disease scares like SARS, Dengue Fever, Yellow Fever, Ebola, the 2009 flu pandemic, Cholera and MERS I expect that the fever pitch coverage of coronavirus will prove excessive and unfounded (it certainly is so far).  The majority of deaths will be in the poorest countries with the worst healthcare systems, and will almost exclusively be among the old, very young and the already sick, i.e. people who are much more prone and vulnerable to disease than healthy, wealthy westerners.  For the small number that die it is sad, and for their loved ones it is tragic, but for the rest of us it’ll be over and done with in a matter of months and will likely be forgotten in a year.

Until then, my only advice is to stop buying face masks, because they’re ineffective, and maybe invest in face mask futures instead so when all is said and done at least someone other than government agencies will have got something out of this.