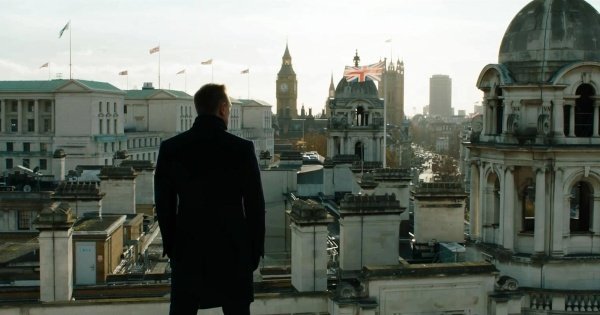 Dept of Energy and Climate Change Documents on Skyfall

Adding to the British government departments who have provided assistance to the James Bond franchise, the now defunct Department of Energy and Climate Change (DECC) have released documents on the filming of a scene for Skyfall at their headquarters in Whitehall.  The Foreign Office, the Ministry of Defence and MI6 themselves have all aided the Bond film series in one way or another over the decades, and though it only existed for 8 years the DECC can now be added to that illustrious list.  Skyfall seems to be one of only two films allowed to film at the DECC building – the other was Harry Potter and the Deathly Hallows: Part 1.  This was one of several locations used for Skyfall that are either owned by the government or are sites of political importance.

Unlike Spectre, which was a tedious trail through exotic locations with a bit of torture thrown in just to keep you awake, Skyfall‘s locations provide decoration and context for the story rather than the other way round.  Several are either on government property or have geopolitical significance, and some have been used before either in the James Bond books or the movies.

1) In the opening chase sequence Bond starts out in Istanbul but then the train he’s half-destroying moves into the Turkish countryside.  Bond is shot and killed and falls down into a valley as the train goes over a bridge.  This takes place on the Varda Bridge outside Kiralan, which was built by Ze Germans in 1912 as part of a railway connecting Berlin to Baghdad.  After the Ottoman Empire was ditched by the British in the late 19th century they turned to Germany to form a new alliance.  This railway, the Orient Express (a major setting for From Russia with Love) and the lasting connection between Germany and Turkey – as well as some of the sparks of WW1 – are the legacy of this relationship. 2) Back in London, M is called to a meeting with Mallory who tells her she is resigning.  This takes place at 10 Trinity Square, a building opened by then Prime Minister Lloyd George in 1922 as the headquarters of the Port of London Authority.  After a period as the headquarters for an insurance company it is now being developed into a luxury hotel and private members club. Promo on side of Ten Trinity Square, London

3) After visits to the Old Royal Naval College, Shanghai and Hashima Island, Bond ends up as his historical family home – the Skyfall Lodge.  This is an entirely fake building supposedly set in Scotland but actually purpose-built out of plywood on Ministry of Defence land on Hankley Common near Elstead in Surrey.  Hankley Common was also used for The World is Not Enough and Die Another Day. 4) The very end of the film sees Bond reflecting on M’s death while stood atop a building looking out over Whitehall.  In the background is Big Ben and the Houses of Parliament.  In the foreground is the old War Office building which is still owned by the Ministry of Defence (though it’s leased out for 250 years to a hotel conglomerate) and which served at the MI6 headquarters in A View To A Kill, Octopussy and Licence To Kill.  This rooftop is the headquarters for the DECC. When I asked the DECC for records on the filming of Skyfall at their headquarters they responded with five documents but refused to release the information on how much the producers paid for all this.  Their response letter states:

The Department’s commercial interests would be prejudiced in that by revealing how much it received in income from hiring its premises or the insurance conditions under which it was prepared to hire its premises would make it more difficult to conduct negotiations and achieve value for money when letting similar future contracts. Commercial companies would know how much the Department might be prepared to accept for the hire of its premises or the terms of hiring and this might lead to the Department receiving less income than it might otherwise have done.

This is sneaky, as it enables government departments to milk the entertainment industry by not revealing information on how much it costs to access their locations for shooting a film.  Once more this shows how the governments involved in the industry are not playing fair and are motivated by what they can get out of it, whether that be financially or in terms of propaganda value.

The documents also reveal that in order to get the desired shot the crew had to use a scaffold to raise the effective height of the roof three feet.  They also had to permanently relocate an aerial used to send a live feed to the House of Commons – which was done at the production company’s expense.

What is in the redacted portion of this paragraph I cannot guess.  If it was simply ‘access fee’ or similar words then they wouldn’t need to be redacted.  However, aside from security staff and moving the aerial there is nothing apart from access to the rooftop and some others rooms in the building (for a green room, etc.) there is nothing that the DECC could reasonably be charging for.  So what is this redacted part of the fee?

DECC documents on the filming of Skyfall (zip file)