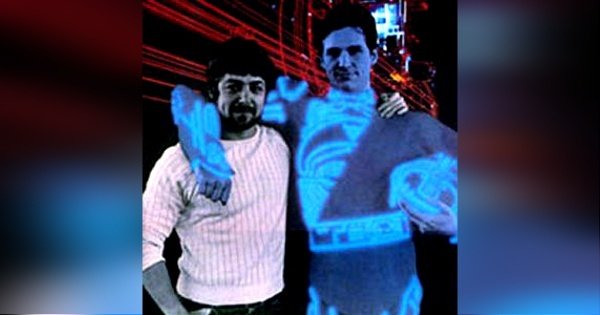 Did the Dept. of Energy invent the ‘Making Of’ video?

The Department of Energy has a minor but interesting role in the history of Hollywood, providing shooting locations for Tron (1982) and Star Trek Into Darkness (2013) at the Lawrence Livermore National Laboratory.  I am still awaiting documents on Star Trek but the DoE have provided me with another of their records on Tron – a kind of in house making of video.

The Making Of Tron with the Department of Energy

The video is a fascinating nugget of history – a document of the first time that the Livermore lab or any other DoE laboratory had served as a film set.

The video is only a few minutes long and not of the best quality but it is a fascinating little glimpse behind the scenes of Tron, itself one of the most radical, unusual and forward-thinking films of its time.  In keeping with the previous DoE documents released on Tron, the video focuses not on the film itself or on the DoE’s involvement, but on the impact of science on the world.  Just as with NASA, it appears that it is a general scientific philosophy that the DoE is concerned with rather than their institutional public image.

The narrator of the video journal entry says that star Jeff Bridges, ‘had little to say about the computer and the future that technology will bring.  Those are the ideas that happen to be the subject of this film.’  Wait, isn’t this supposed to just be a childish adventure movie set inside a computer?  Who said the film was about ‘the future that technology will bring’?  The producers of this video also interviewed director Steven Lisberger, who said:

I’m really in favour of all the R&D work and I’m in favour of getting kids on computers and I think science is the only thing that’s gonna help us.  I think the fact that this facility is here is great, I think the research that’s being done in fusion is great…

Lisberger was then asked, ‘A lot of people are afraid of technology and computers and the future – you aren’t?’ to which he replied:

No, I’m not really scared of computers at all, or the technology.  I think that science is going to help us a lot more than hurt us in the long run, I think that if we’re not careful, if we look at science in a short term approach then we could get screwed up…  As long as someone’s got a lot of perspective on the situation I think things are gonna be great, as long as major commitments aren’t made to short term ideas, I think things will work out.  I think what’s great about this facility is that a lot of people have committed to projects that won’t come to fruition for decades.  And that’s very rare in a society that deals with people who have to be satiated with everything, every second of the day.

So, Did the DoE invent the Making Of video?

The answer is no, not quite.  The earliest making of that I can find is this 1977 ABC television documentary The Making Of Star Wars.  However, there is something very innovative about this little video, which is much more akin to the sorts of making of featurettes that are now commonplace on DVDs and other home video formats.  In 1981 when this DoE video was being made, home video was still in its infancy and was too expensive for most people, and making of videos were usually much longer, sometimes feature length, for broadcast on television rather than as a bonus on home video.