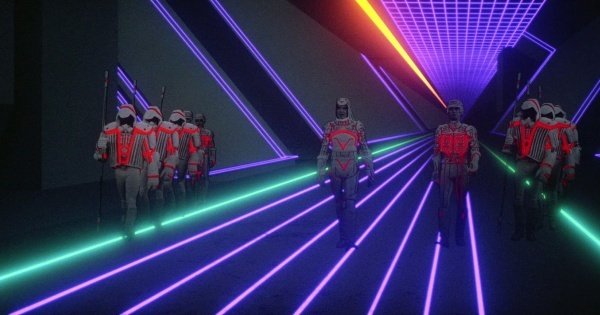 Tron is a classic piece of transhumanist cinema and the first of a string of films where someone is sucked into a digital realm and has to battle it out with computer programs in order to save the day (the Matrix trilogy being the most popular examples).  It was also a curious departure for Disney from working primarily on animations and other fantasy films explicitly aimed at children into more teen- or adult-oriented science fiction.  Tron was also the first film to be allowed to film at the Lawrence Livermore National Laboratory, so I asked the Department of Energy for any records on this.

The filming of Tron at Lawrence Livermore National Laboratory (LLNL)

Aaron Franz and I reviewed Tron and the sequel Tron: Legacy for an episode of ClandesTime where we discussed Disney’s government connections and how the transhumanist ideas in the films are in keeping with the Disney corporation’s philosophy.  For more on the film itself and the religious theology it propounds I strongly recommend this episode.

The records provided by the DoE are mostly articles from internal newsletters, two of which are about how many scenes for Star Trek: Into Darkness were filmed at NIF – the National Ignition Facility at LLNL.  These articles note that this was the first time since Tron that a movie had been allowed to film at LLNL.  One of the articles notes that:

About 1,200 LLNL employees were invited to watch a special preview showing of “Star Trek: Into Darkness,” parts of which were filmed at NIF during a Facility Maintenance and Reconfiguration Period last year.

The NIF is primarily a research lab looking into nuclear fusion ignition.  The article from the DoE quotes JJ Abrams, the director/producer of the rebooted Star Trek franchise who said:

We were there just trying to shoot a movie but all around us, these innovative scientists are working on technologies that will likely help the whole world.

The filming was approved by the National Nuclear Security Administration and another quote from Abrams tells us why:

So many people told us ‘Star Trek’ inspired them to get involved in science. One of ‘many’ scenes that were filmed at NIF

Another internal newsletter article notes how the NIF (the world’s largest laser) was used for the climactic warp core sequence towards the end of Star Trek: Into Darkness and that this was the subject of part of a History Channel documentary.

As the director of NIF Ed Moses says in this clip, while sat in front of the NIF laser/warp core:

One thing you have to remember about Star Trek – what was their objective?  Exploring new worlds. So here we can explore them.  Behind me we have been to the centre of Saturn.

Another record provided by the DoE is an obituary for Robert Ricker Baltzer.  Baltzer joined the US Air Force when he was just 17, working for them for 16 years including during the Korean War.  He then joined DoE, working at LLNL on the Argus laser project and then the Shiva and Nova lasers.  According to the obituary:

While at the Lab, he supervised the filming of the original “Tron” movie which took place in the laser bay. For his efforts, he received an award from the Disney Company.

The final article from DoE is the only one from the time of the filming of Tron.  It tells the story of a DoE official who was an escort to the Disney crew for two out of the four days they spent at LLNL.  The article is titled ‘Disney’s magic works its spell on Lab staff’ and perhaps unsurprisingly captures the tone of Tron, mixing science with magical fantasy.

Already the presence of the Disney troops was vaccinating this serious business of scientific research with fun and good will.  Disney films always let Good conquer Evil.  Abundant magic helps not just the heroes and heroines but the villain as well.  The world is always a better place by the end.

To find the DoE saying the same thing about Tron as JJ Abrams said about the DoE – that both are making the world a better place – shows how well their mutual interests dovetail.  The final line of the article describes driving home at the end of a day’s filming:

As I drove I savored the paradox of the last two days.  The Walt Disney people were dead serious about creating make believe while working the midst of laser beams and the real electronic computer technology upon which modern man is betting his survival.  Perhaps truth is humankind’s sense of humor and make believe is our salvation.

The DoE also provided one record – an archive listing of a video that appears to be an in-house recording of the Disney crew filming at LLNL, but they say they will send that via the post so I will make that available when it arrives.  I have also requested any further documents on the filming of Star Trek: Into Darkness so they will also be the subject of a future article when and if they turn up.

DoE records on the filming of Tron and Star Trek: Into Darkness at LLNL