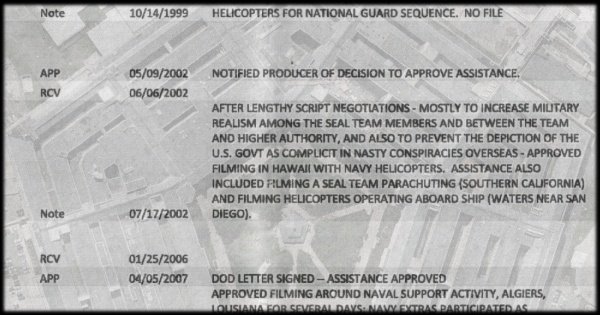 The Department of Defense maintains a database summarising its collaboration with Hollywood productions.  The master list for this database was released to me two years ago as the DOD Film List and since then I have obtained a handful of entries.  Getting a little more creative I asked for entries on over a dozen films and today got a response with details on Iron Man, Iron Man 2, Contact, Tears of the Sun, Indiana Jones, Deja Vu and others.  This provides new evidence of the Pentagon rewriting movies to suit their agenda, sometimes substantially altering the scripts in the process.

During my ongoing discussions with Matt Alford we realised that the DOD film list that I obtained back in 2014 is actually a file listing for a database, a database that Phil Strub says is incomplete.  Nonetheless, even an incomplete database contains some information so in April I put in a request for all the entries on the following movies, known to have had Pentagon support:

The DOD’s response letter states that ‘the database does not contain an entry for some of the requested titles, and the entries for many titles are incomplete’.  Despite this the released records do contain new information, some it quite startling.

Three entries include in the ‘note’ section ‘File in Georgetown Library’ – Clear and Present Danger, King Kong and Rules of Engagement.  This is a reference to the large amount of pre-2002 records on the Pentagon’s collaboration with Hollywood held in a private archive by the academic Lawrence Suid.  Suid has consistently refused access to this archive to anyone, since he allowed investigative journalist David Robb to look through some of the files resulting in Robb writing a scathing book about DOD propaganda.

However, most of the entries don’t include this and though some say ‘no file’ the other files may still be held by the DOD themselves.  When a more complete copy of this database has been obtained I will begin requesting the files for the most prominent films and see if the Pentagon denies having any of them, as Strub has when academics and researchers have asked him.

Script Changes at the Pentagon’s Request

The collaboration database excerpts make a few mentions of changes to scripts being made in exchange for DOD production assistance.  The note on Clear and Present Danger says:

Requested aircraft, ships, locations.  After an extended period of script negotiations, approved assistance.  Use of aircraft carrier to launch attack on drug lords.

The details of these changes I have previously written about but the whole process took five months of rewriting and changed numerous elements in the script.  A fuller account of the assistance provided by the DOD is available through this document from the Defense Intelligence Agency, which shows that the Pentagon and possibly other government agencies reached out the Mexican government for permission to move two MH-60 Blackhawks into Mexico for filming.

For Contact the database provides more information.  The note says:

Contact was always one of the more surprising entries in the database since the storyline doesn’t involve the military in any significant way but this shows that even movies that receive minimal assistance can have their scripts substantially altered.  The original script clearly satirised the military and these aspects were removed or attached to civilian characters instead just so the producers of Contact could borrow a few vehicles for one sequence.

The tale of License to Kill is quite odd.  The note records how:

Initially, filmmakers did not approach Pentagon, believing they could not obtain assistance.  After seeing script, Marines indicated they would assist if certain scenes revised.  As a result, company did receive assistance, particularly with filming of take off from helicopter assault carrier.

This is strange for several reasons – (1) the Bond films have been friendly with the Pentagon since Goldfinger, (2) How did the Marines see the script if the film’s makers did not send it to them? (3) What were the changes that were made, again in exchange for minor assistance from the DOD?

The most explicit account in the released excerpts is for Tears in the Sun, a movie the CIA praised but also labelled ‘just Rambo in the jungle’.  The database says:

After lengthy script negotiations – mostly to increase military realism among the SEAL team members and between the team and higher authority, and also to prevent the depiction of the US Govt as complicit in nasty conspiracies overseas – approved filming in Hawaii with Navy helicopters.

Notice that it doesn’t say they prevented the depiction of the US military as complicit in nasty conspiracies, but the US government.  So these were not simply about making the Pentagon look good for recruitment purposes, but are nationalistic, statist propaganda.  The DOD used similar leverage on Clear and Present Danger where scenes depicting the White House and senior government officials as reckless and incompetent.  On the other hand they very much encouraged the negative depiction of the State Department in Rules of Engagement, so exactly where the Pentagon stands politically is not certain.

There are a couple of amusing items.  On Iron Man 2 the database describes how the Pentagon:

Gave the visual effects department access so they could meticulously and accurately reflect realistic aircraft markings on the War Machine character.  The Air Force assisted in designing the War Machine markings.

This is the form of assistance that productions companies get but, it appears, do not have to pay for.  Instead the US taxpayers are paying so that Pentagon officers can sit around designing the paint job on a supporting character in a Marvel film.  Oh beautiful, for spacious skies…

King Kong also has a curious history with the DOD.  The producers of the 1933 original asked the Pentagon to borrow some planes for the climax but were turned down because such aircraft ‘were commercially available’.  So the producer ‘went to Floyd Bennett Field on Long Island and convinced the commander there to send a flight of four planes to attack King Kong’.  It seems that way back in 1933 the Pentagon were slow to react to attacks on skycrapers in Manhattan.

The 1976 version did receive assistance from the Pentagon but it appears even they realised it was a poor effort: Nobody does it better…

Excerpts from database on DOD-Hollywood Collaboration

UPDATE June 2017 – I obtained a full copy of the DOD’s Hollywood database, available uniquely and for the first time here: