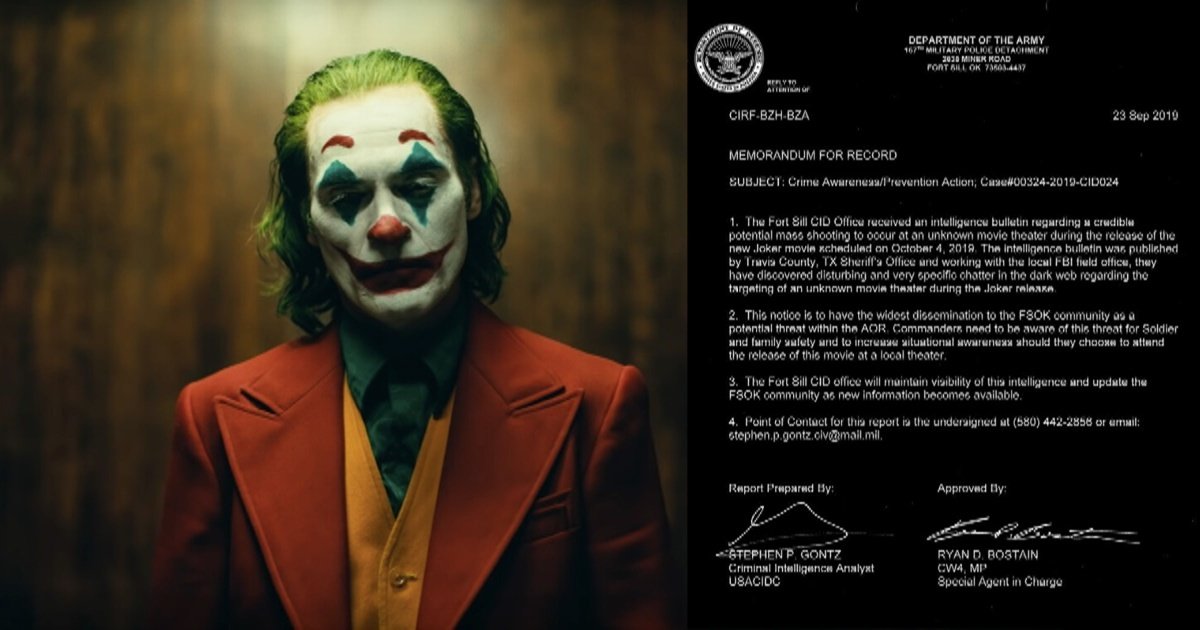 Even the US Army Warned of Violence at the Joker Premiere But So Far, So Good

For weeks the internet has been awash with claims, rumours, scuttlebutt and hearsay about some kind of shooting at the premiere of the new Joker movie.  Even the US Army sent out a memo saying they’d received a ‘credible threat’ of a shooting attack, but the film’s premiere went off without a hitch this weekend.  It is unclear why this movie is being singled out, given the plethora of psychotic violence available to cinemagoers.  With a bit of luck this is just the latest round of fear-hyping by a news media industry increasingly fixated on stirring up emotional reactions so they can then report on them and pretend they are doing their jobs.

Joker Copycats? Or Psychopaths in Disguise?

Much of the reporting on the threat of a mass shooting at the Joker premiere – the movie goes on general release on October 4th – refers back to the Aurora shooting at an early showing of The Dark Knight Rises in 2012.  While that film doesn’t feature the Joker as a character, the shooter James Holmes apparently referred to himself as ‘The Joker’ and was somehow motivated by the character in the previous installment, The Dark Knight.   There have been several (dreadful) Batman films since then that have drawn almost no security reporting, a.k.a. fearmongering coverage.

While the Joker is a character that inspires visual copycats in partywear and halloween costumes, there are only a handful of crazy people who commited violent crimes and then somehow attributed them to the Joker.  Given the propensity for films, especially American films, to use extended violence as a means of filling in for a plot, characters, surprise, tension or any other means of entertaining people, I suspect something else is going on.

The Joker is a play on an archetype – figures that occur in a wide variety of cultures that have extra symbolic significance.  Some observers would argue that the sadistic nature of the character and his fake smile are representations of psychopathy, and that humans have developed this archetype as a subconscious or semi-conscious warning to themselves about psychopaths and psychosis.  I am one of those observers.  This is why many children are scared of clowns, and why It has been so successful.

So when someone burns down their school and subsequently claims ‘the Joker made me do it’, or dresses up like the Joker and goes on a driving and shooting rampage, they aren’t aping the actions of the character in the movie, or even referring to him as their inspiration.  After all, the Joker never burned down a school or committed crude acts of violence – he is a sophisticated criminal, skilled in emotional manipulation and a cunning schemer.  What these people are referring to is their own psychosis, not something as simple as the ‘monkey see, monkey do’ copycat effect.

On only one occasions has this manifested in a movie theater during a screening of a somewhat related movie – in Aurora in 2012.  All other ‘Joker copycat’ crimes have had nothing to do with movies or comic books or anything else directly related.  So the likelihood of a serious violent crime at a screening of the new Joker movie later this week is incredibly small, but once a media meme gets going there’s no stopping it.  Especially when there’s no Marvel movie or identity politics casting nontroversy to talk about.

The US Army Goes Full Joker

In the last two weeks the US Army has jumped on the bandwagon.  They sent out an email (Sept 18th) to all active duty members warning them of possible shootings at screening of Joker, and providing advice on how to respond. Then, the CID at Fort Sill sent out a memo warning of an entirely non-specific but supposedly ‘credible threat’ at an unknown, unspecified movie theater during a screening of the new Joker on October 4th. The initial email was sent in response to an FBI bulletin about incels on social media idolising the Joker and potentially carrying out criminal violence.  The memo a few days later was based on an intelligence bulletin from the Travis County Sheriff’s Office who had been working with the FBI and had uncovered incel chatter on the dark web.  One wonders how dark this part of the dark web can be if the FBI and Travis County Sheriff can get onto it, but I’m sure they found posts saying some angry stuff because that’s primarily what incels post on the internet.  I’m sure they’ve done it before, I’m sure they’ll do it again.

And naturally, I’m firing off a bunch of FOIA requests to try to get to the bottom of the papertrail on this issue.

But I can almost guarantee there will be no mass shooting on Friday, or at least not at a screening of Joker.  The sorts of people likely to do that aren’t going to be posting about it in advance on social media, or even on the dark web.  They aren’t going to be motivated by misogyny or sexual frustration, because – let’s face it – the majority of people going to see the new Joker will be male anyway.

In reality, the official premiere at the Chinese Theater went down well, without a hint of gun violence or bomb threats or Ebola outbreaks.  And I’ll bet anyone £1000 that the wide release this Friday will likewise go off successfully and none of these threats will prove well-founded.