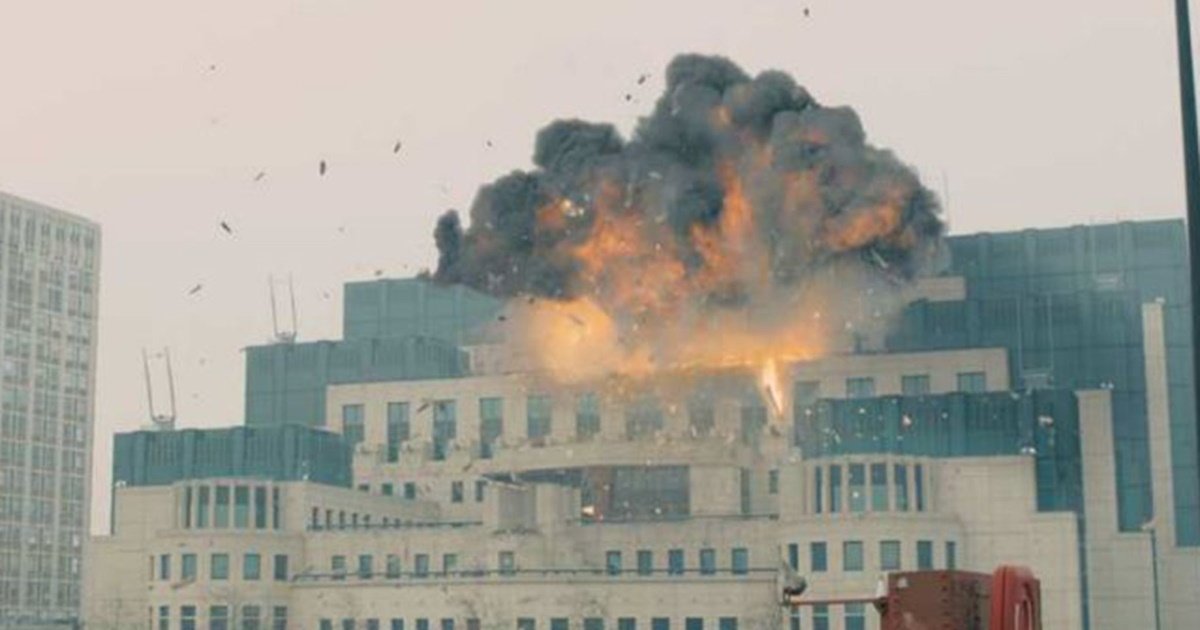 Former head of MI6 and Iraq War criminal Sir Richard Dearlove continued his recent speight of complaining about everything by claiming that he was never told that the producers of several Bond films had been granted permission to film the MI6 headquarters at Vauxhall Cross.  Dearlove says that the requests were funneled through then-Foreign Secretary Robin Cook, and that he never would have given permission for filming to be used in a scene where MI6 HQ is blown up, such as in Skyfall.

But Dearlove almost certainly meant The World Is Not Enough, as Skyfall wasn’t made until years after Cook died and Dearlove had left MI6.

The new MI6 building was unveiled in 1994, and almost immediately appeared in Goldeneye as part of MI6’s new post-Cold War PR offensive.  While it did not appear in 1997’s Tomorrow Never Dies it was brought back for The World is Not Enough in 1999, and Die Another Day in 2002.

According to Dearlove, during his time as head of MI6 (1999-2004) the producers of The World is Not Enough approached the Foreign Office about filming scenes near and around the Vauxhall Cross building.  Dearlove says that Cook never asked him about these requests, ‘knowing I would say no’.  According to The Independent:

The former head of MI6 has revealed he would have said “no” to a scene in James Bond movie Skyfall in which the organisation’s London HQ is blown up by a terrorist.

Dearlove is likely getting confused – the building is attacked by terrorists in both The World is Not Enough (prefiguring the Real IRA’s attack the following year) and in Skyfall.  So is Dearlove saying he hypothetically wouldn’t have given his permission for the building to be used for such a scene, or is he claiming he was never asked?

As with most of the things Dearlove has said in his life, this appears to be untrue.

I did FOIA the Foreign Office for documents related to filming requests from the Bond producers but they claimed to be unable to find anything.  Back in 1999 there were newspaper stories saying that the producers have been refused permission (by either MI6, the Foreign Office or both) to film part of the Thames chase sequence in front of the MI6 HQ.  Though it seems these stories weren’t true, and if you watch the film it is clear they did get permission to film there.

What we also know is that the film premiered at the very building that Dearlove says he never gave his permissions for them to film at:

A special première of The World Is Not Enough was held at Vauxhall Cross for MI6 staff, who cheered when their headquarters was destroyed in the film.

It seems profoundly unlikely that – on the one hand – Dearlove would have refused permission for filming while – on the other hand – allowing the film to be shown to MI6 officers in their HQ.  Exactly what we should make of this isn’t clear, excep that it’s yet another example of Dearlove’s use of doublespeak.  Maybe he was told about the filming request, maybe he wasn’t, but in either case these recent statements strike me as a ornery old spook playing some kind of PR game, rather than an honest intelligence veteran pulling back the curtain on how these things are done.