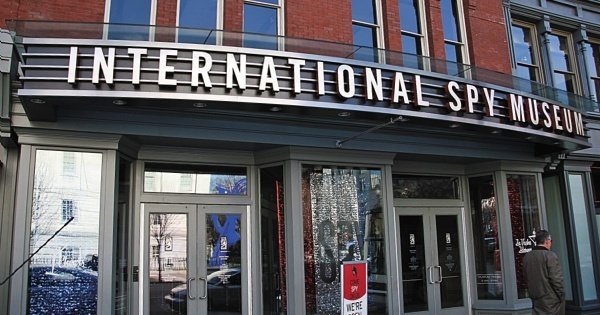 The International Spy Museum is a privately owned museum that hosts exhibits and other events on the history of spies, spying, intelligence tradecraft and so on.  Conceived in 1996 – coincidentally just as the CIA adopted a more overt approach to domestic propaganda – and opened in 2002 – coincidentally a crucial year for CIA domestic propaganda – it has grown a strong reputation for itself in the years since then.  Financed by The Malrite Company and the District of Columbia, The International Spy Museum is a shining example of collaboration between government and the private sector.  In all likelihood, it is a front for the CIA.

Who’s who at the International Spy Museum?

The Malrite Company was founded by Milton Maltz, who worked as a code breaker for the NSA and the US Navy during the Korean War.  He is often described as the ‘driving force’ behind the project.  The public face of the museum is usually Peter Earnest – a career CIA man who worked in black operations.

The Mendezes and Mahle are important because they have worked on two of the biggest CIA-supported productions of the post-Chase Brandon era: Argo and Salt.  Mahle also worked on Hanna, which as far as I know had no direct CIA involvement.  They are not as high ranking as most of the other former and current advisory board members but they, crucially, provide access points to the CIA’s public affairs office and to Hollywood.  Tony Mendez’ medal from the CIA, which appears in Argo, is among the numerous items on exhibit at the International Spy Museum.

Many of these names also appear among the list of speakers at major events hosted by the museum.  The Mendezes have spoken at multiple events, the museum has an Argo tie-in online exhibit, there is clearly a relatively small clique of former intelligence officers and officials who run this show.  Bizarrely, 9/11 whistleblower turned media talking head Anthony Shaffer has also been a guest speaker.

The FBI documents on the International Spy Museum

Courtesy of a recent FOIA request by MuckRock the FBI released a handful of pages from when the museum was first being put together.  It is not explained how or why the Bureau got hold of this information, but the files involve a request to the Austrian Ministry of the Interior for permission to use their emblem as part of the exhibits at the museum.  The request was sent in June 2001 and mentions that the museum’s developers had contacted other foreign embassies to ask for permission to use their crests.

It appears the Austrians then turned to the FBI to ask if they were a legitimate organisation, which the FBI verified.  An internal pair of emails states that ‘they want to create the largest permanent exhibition of material related to espionage.  I wonder if any OPCA types would know if we have cooperated in any way?’  I assume OPCA is a typo and the writer meant OCPA – Office of the Chief of Public Affairs.  The reply came back, ‘Talked to Mike Kortan at the press office and said it a for real deal.  There is currently a spy tour that takes you around various historical sites in the city.  The tour will start and end at the museum in the future.  It is a private venture.  Who knew FCI could be so exciting.’

FCI is usually the acronym for Foreign Counterintelligence Investigation but that would be massively overstating what these documents show.  Perhaps there is a ‘Foreign Communications’ unit of the FBI.  Mike Kortan is Michael Kortan, then Chief of the Public Affairs Section for the Bureau, now assistant director for Public Affairs.  What these documents, particular the emails, show is that even those within the Bureau were wondering if their agency had anything to do with the museum.  Given the relative lack of FBI representation on the advisory board this seems unlikely, whereas the CIA are incredibly well represented and in some cases by people who have been involved with very pro-CIA movies.