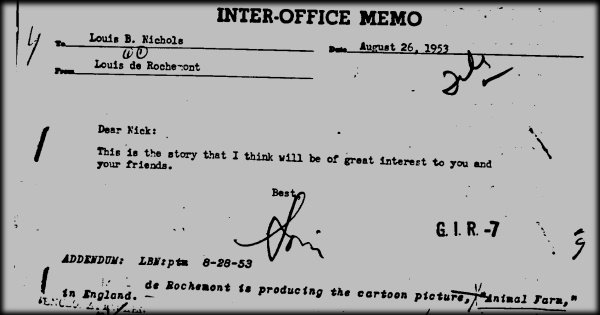 George Orwell’s FBI file was at one time available on the FBI’s website, but has not been for some years.  Other websites that did feature it now come up with dead links.  The ‘memory hole’ irony is not lost on any of us, I’m sure.  So, it is nice to be able to publish it, obtained despite my FOIA requests to the FBI being refused.  The lengths I actually went to in order to obtain this file are not worth outlining in tedious detail.

The file opens with a letter from the US publisher of 1984 to J Edgar Hoover, asking for some sort of commercial endorsement for the book.  Hoover refused, and the book was assessed by the FBI to see if it was actually a satire of American society.  They concluded it was not, and that it was a hugely successful critique and satire of Soviet society.  Amusingly, the file also contains a report from the Russian media proclaiming that Orwell was in fact depicting the US in 1984.  Everyone was trying to use the book to demonise the other, when in all likelihood both Animal Farm and 1984 are addressing the likelihood of totalitarian society across the world, regardless of ideological labels.

When the CIA funded a film adaption of Orwell’s book Animal Farm in 1954, they used producer Louis De Rochemont as a go-between.  De Rochemont had previously made two films with the FBI, others with the US military, and one project with the OSS where the relationship broke down halfway through the production.  De Rochemont, having not been in touch with his buddies at the Bureau for a couple of years, wrote to them in 1953 to tell them of the forthcoming animated production of Animal Farm.  After the film was released to critical acclaim he also sent them a whole series of news clippings and glowing reviews.

The laugh out loud moment comes in the form of a 1955 memo about the film adaptation of Animal Farm by Louis De Rochemont, say he had ‘hit the jackpot’ with his adaptation of Orwell’s story.  There is of course no mention of the fact that the film had been funded by the CIA, or that the ending was changed to suit their agenda.  It appears the FBI did not know about the CIA’s involvement, which was perhaps the point of De Rochemont writing to them. There are 11 pages of the file that have never been released, and large sections towards the back of the file on surveillance of groups inspired by Orwell are redacted.  But it’s OK – someone has noted on most of the pages that there is ‘no mention of George Orwell’ on the unredacted page.  You can download the FBI file on George Orwell here (PDF).