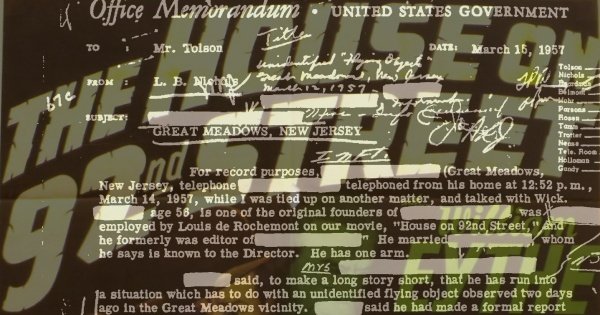 One of my many unsuccessful FOIA requests to the FBI was for documents on the film House on 92nd Street, a wartime anti-Nazi spy drama that they co-produced with Louis De Rochemont.  De Rochemont made a career working with various government agencies but this was his first FBI production.  When I requested documents from the Bureau the answer came back that they didn’t have any.

So, on a whim, I searched their existing releases to see if I could find any reference to the film, and in the middle of part 12 of 16 of their massive UFO disclosures (yawn) there is one memo referring to House on 92nd Street and to Louis De Rochemont.  The memo even calls it ‘our film’, showing just how much influence the FBI felt they had on the production.  It records how someone who worked on the film phoned the Bureau to complain that the military weren’t taking their UFO intelligence seriously.

What this one-armed man who was formerly the editor of [redacted] and who was married to [redacted] who was known to J Edgar Hoover did or didn’t know about UFOs is probably unimportant, but it is interesting that the FBI took him seriously instead of fobbing him off onto the Pentagon.  You can download the FBI’s memo referring to House on 92nd Street here (PDF file).