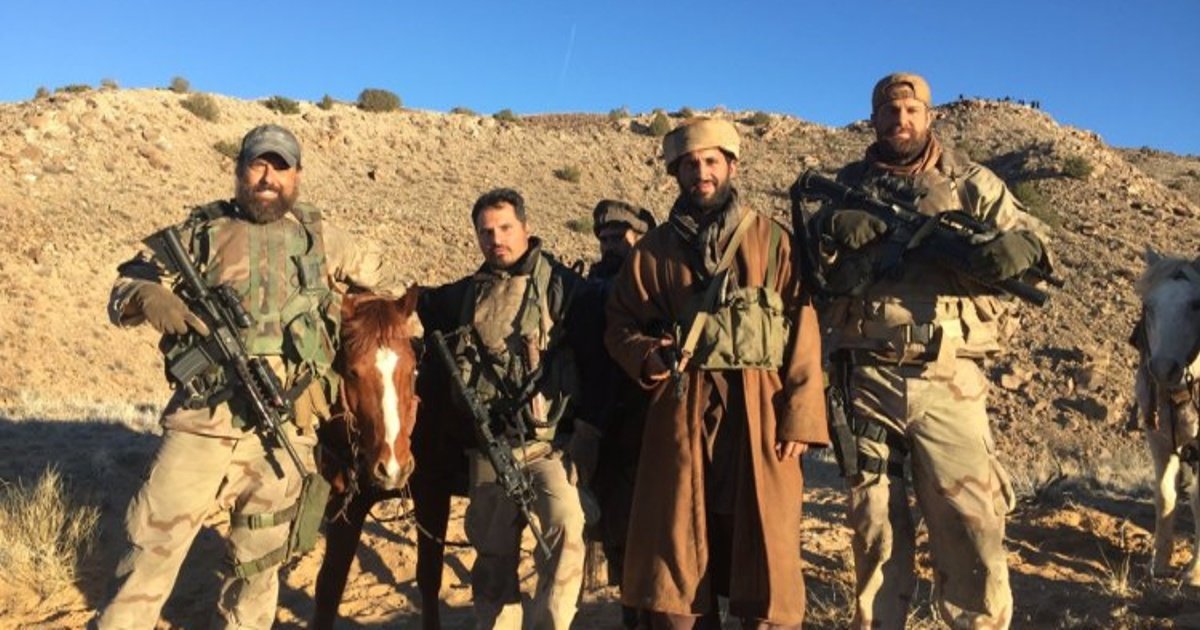 Full Length Beards and Neck Tattoos: How the US Army rewrote 12 Strong a.k.a. Horse Soldiers

12 Strong a.k.a. Horse Soldiers is based on a book about a US Army Special Forces group sent to Afghanistan during the early days of the post-9/11 War on Terror.  Recently released emails from the Army show that they made changes to the script in exchange for their support, including trying to rewrite one of the soldiers’ past to avoid some minor criminal activity.  They were also concerned about the physical appearance of soldiers, especially where the script depicted them having ‘full length beards and neck tattoos’.

The nearly 200 pages of emails cover mid 2016 to early 2017 – the period while negotiations over the script were going on and preparations were being made for filming at US military facilities (particularly Kirtland Air Force Base).  The Air Force have yet to respond to my request for documents on the film, but we can piece together some details from what the Army released.  For example, one the early emails sent out to announce that the film was finally in pre-production notes how the CIA angle of the story was being left out of the script:

It looks like the movie Horse Soldiers is finally going to happen. The movie is based on Doug Stanton’s book by the same name. I have read the book and the script and except for a few minor corrections to the script, it closely follows the book. The focus is on CPT ███████ Team and not on the CIA activities. The producer told me today they plan to have an actual Team Member on set during filming.

Another email noted how during one sequence immediately after 9/11 when the Army Special Forces are loading out before travelling to Afghanistan that they didn’t look how soldiers looked at that time:

My other concern is that during the loadout sequences at Fort Campbell that occurred shortly after 9/11 our soldiers didnot have full length beards and neck tattoos. That came later. I hope ████ guys are going to shave for those sequences.

Another concern was the back story of one of the characters, who was a modestly experienced A-Team leader whereas the script portrayed him as a FNG or ‘Fucking New Guy’.  There was also an issue with a line of dialogue saying one of the characters had a choice ‘between Jail and the Army’ and chose the Army.

I told him our two biggest issues were the back ground story of CPT ███ being any FNG when he was actually a Team Leader for two years and the comment about Sergeant ███ having a choice between Jail and the Army. According to the book the bar fight incident did happen, ███ attorney was able to plea deal it down to a misdemeanor with a probation period. He did lose his job as a school teacher and he started to work construction. A period of time later, he decided to join the US Army. It can probably be corrected with a couple of line changes.

Showing how high up the decisions over these script changes go, another email from an officer in the Army’s entertainment liaison office says:

I hope my leadership backs our office when it comes to CPT ████ back story and the image of our troops on the morning of 9/ 11.

The script notes themselves are referred to in emails but were not included in the released documents.  I have followed up with an appeal and an additional request to try to get a copy but someone who saw the notes (likely Phil Strub, given the identification CIV OSD PA) commented ‘Good notes!’.  The same person also objected to the producers’ choice of Kevin Kent as a military technical adviser.  While Kent is a former Navy SEAL, the special forces depicted in 12 Strong are from the Army, which Strub saw as a conflict.

In the event there was nothing they could do about it, but it does show that the sheer number of ex-military guys in Hollywood working as technical advisors is becoming a problem for the DOD.  They aren’t legally allowed to compete with commercial outfits by allowing their own current employees to moonlight in the entertainment industry so either they’ll have to establish new regulations or just live with the fact that most film-makers doesn’t care whether someone is a former MARSOC, SEAL, Ranger or anything else.

US Army emails on Horse Soldiers a.k.a. 12 Strong