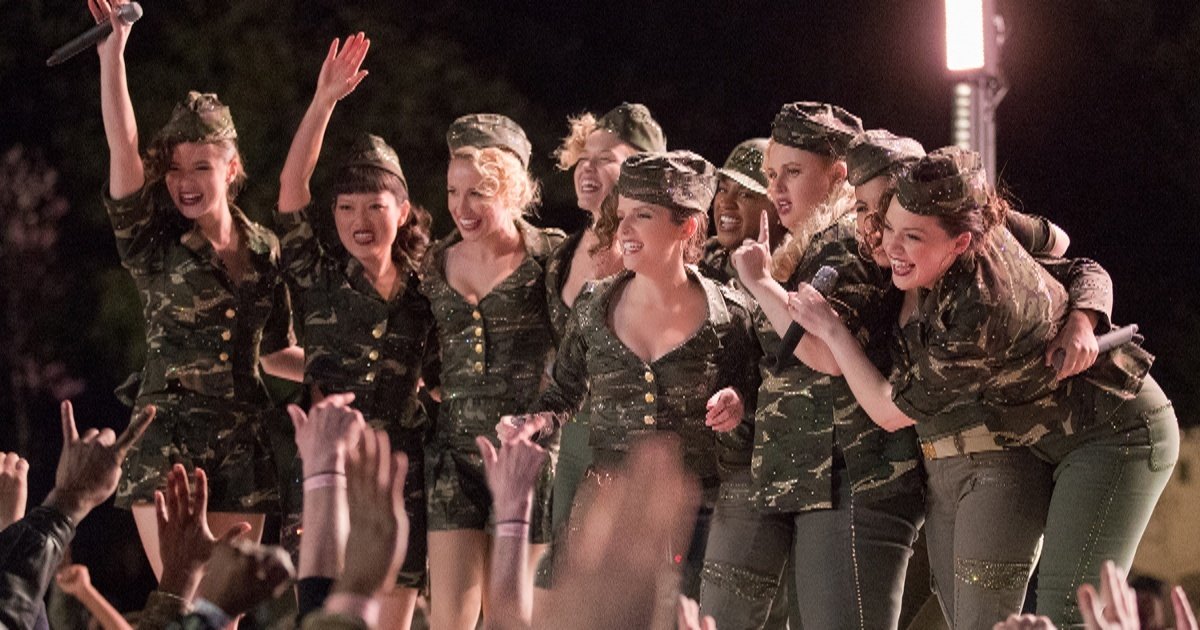 How the Pentagon Rewrote Pitch Perfect 3

Pitch Perfect 3 appears on the surface to be a family-friendly piece of lighthearted, forgettable entertainment.  But beneath that surface lies a carefully-crafted piece of military PR, aimed at recruiting people the DOD usually finds it hard to attract.  Documents recently released by the US Air Force and the Pentagon detail exactly what the military provided in support of the film, and what changes were made to the film by the DOD.

The documents do not make clear where the idea to turn Pitch Perfect 3 into a recruitment poster came from originally.  A large portion of the film was shot at Dobbins Air Reserve Base in Georgia, doubling for Rota, Spain.  This required the assistance of the National Guard and the Air Force Reserve Command, but 2016-17 Air Force entertainment liaison office reports are heavily redacted.  I am endeavoring to get unredacted versions, because it is likely they will clear up who approached who, and when.

The idea may have come from one of the military’s outreach programmes though none of the writers or producers have much history of working with the military and none of them went on the Air Force’s industry leader tour in 2016.  The exception is producer John Bernard, who has worked on both DOD-supported and CIA-supported films before.  Whatever the genesis of the idea, it resulted in a slick piece of supposedly meaningless escapism that struck at the hearts and minds of people who are less likely to be pro-military.

The primary audience for this series of films has been women, especially women with families.  The central characters – the Bellas – are an all-female singing troupe who go through life and love troubles on their way to success.  I’ve never actually seen the films, but it’s obvious just from watching the trailers.  Women are less likely to join the military, and generally somewhat less likely to be pro-military.

So Pitch Perfect 3 allowed the Pentagon to reach an audience that most military-sponsored blockbusters cannot reach, because women with small children are unlikely to take the husband and kids to watch Black Hawk Down or Transformers.  Indeed they were so happy about the collaboration that they promoted it on their website:

Thomas Lesnieski, a retired Army lieutenant colonel and the former director of public affairs for the Georgia National Guard, says there were many 18-hour days on set, helping to scout locations and providing script reviews to make sure the military was shown in a positive light. Since ‘Pitch Perfect 3’ was filmed at Dobbins, Lesnieski even checked that uniforms were worn correctly.

What Lesnieski didn’t say is that the script reviews weren’t just about make sure the military was shown in a positive light, but also involved making casting choices and censoring anything the military doesn’t approve of, but the newly-released documents make that clear.  For example, with the character of Zeke, an Air Force First Lieutenant, the DOD asked if he could be ‘ethnically diverse’, and the producers acceded to this by casting Troy Ian Hall in the role.

However, this ‘progressive’ attitude didn’t last long, as they objected to a scene where a ‘female soldier lifts Cynthia-Rose out of the raft. They kiss too.’  The DOD’s comment was, ‘I’m assuming that this kiss isn’t anything like Chicago and Chloe’s reunion kiss will be, since they’re complete strangers.’  This piece of action was removed from the script.

I will be doing a full breakdown of the military involvement and script rewrites on Pitch Perfect 3 on ClandesTime very soon.

USAF script notes for Pitch Perfect 3 with responses from producers