How the US Military Rewrote Don’t Look Up

All the waves made by Don’t Look Up have missed one key landmark – the Pentagon supported the movie.  Unlike several recent DOD-aided productions, they are actually credited on Don’t Look Up quite openly, both at the end of the film and on IMDB.  Why would the Pentagon work on an ostensibly left-wing film about climate change being disguised as a comet?  And what kinds of script changes were made to appease the PR brass?

Credits from Don’t Look Up, thanking the Department of Defense, AMTRAK, the City of Boston and the Massachusetts Film Office

Curiously, on this movie that supposedly advocates for listening more to scientists and – at least by implication – listening less to the military, the credits do not include NASA.  Amy Mainzer served as a science advisor on the movie, consulting with both the crew (on the technical details of asteroids and so on) and then with members of the cast.

In addition to her occasional work as a science advisor (which extends to the PBS Kids show “Ready Jet Go!”), Mainzer is a professor at the Lunar and Planetary Laboratory at the University of Arizona and the principal investigator of NASA’s NEO Surveyor mission, a mission is set to launch in 2026 to look for asteroids. Mainzer is also the principal investigator of NEOWISE, the asteroid-hunting phase of NASA’s Wide-field Infrared Survey Explorer mission.

While there have been a bunch of articles about Mainzer and her work on Don’t Look Up, and the film is listed in NASA’s annual summary for 2020 as a supported production, NASA themselves don’t appear to be credited. 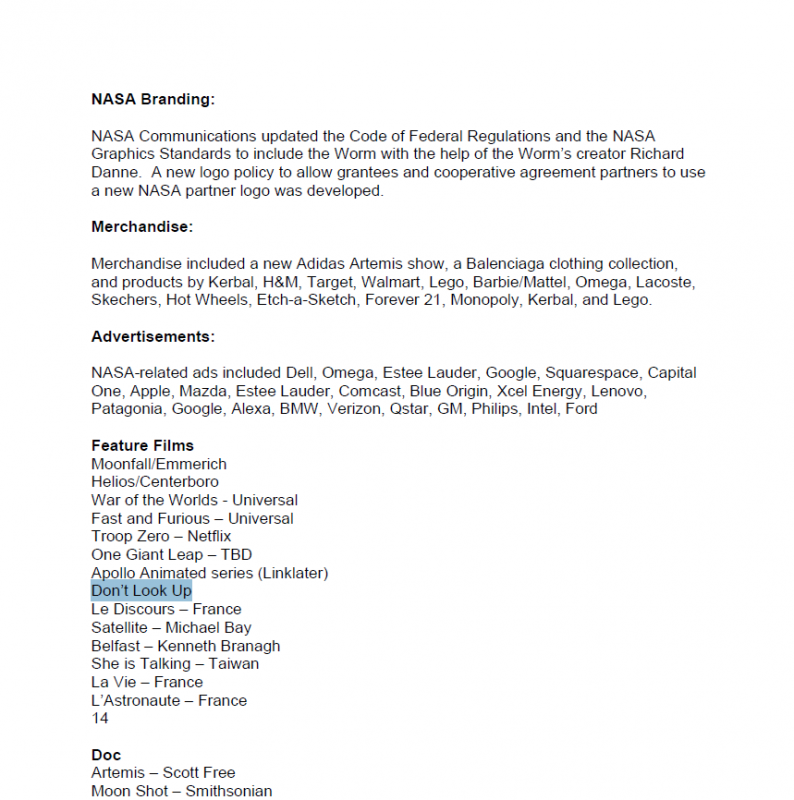 NASA and the DOD are depicted in the film, particularly in the first act when the astronomers first find the comet, need to get confirmation that it’s going to hit earth, and then fly across the country in a military transport plane to meet the president.  Similarly, a military veteran named Benedict Drask leads the initial attempt to use missiles to deflect the comet, before the government and a tech firm decide that attempting to mine it for precious metals is a better idea.

A comparison of a draft of the screenplay for Don’t Look Up with the final shooting script (or just compared to the film itself) reveals numerous changes, many of which seem likely to have been made at the DOD’s behest.  For example, when Jennifer Lawrence and Leo DiCaprio’s characters are being flown across the country in a C-5 military cargo plane, the draft script says:

INT. C-5 GALAXY PLANE – HOURS LATER
Kate and Randall sit in the vacant back of the plane. It’s
like two football fields and is completely empty except for a
perfectly cut in half Abrams TANK.

INT. C-5 GALAXY PLANE – HOURS LATER
Kate and Randall sit in the vacant back of the plane. It’s
like two football fields and is completely empty except for
the two of them.

Similarly, when Lawrence’s character reveals that the government cancelled the missile-deflection plan to try to profit from the comet, she is arrested and flown to a secret location where government officials force her to sign an NDA and keep quiet.  In the draft script, she’s is flown black site-style in a giant military plane.

INT. GIANT MILITARY TRANSPORT PLANE – SAME TIME
Kate is in the back of the massive transport plane with the
hood still over her head flying to God knows where.

This scene does not appear in the shooting script or in the film.

Other deleted scenes and dialogue include a joke about the NSA spying on the scientists, references to gun stores running out of guns as everyone starts to panic, and an entire sub-plot involving the CEO of the tech firm buying up and taking over US media.  The CEO also had a lengthy scene where he approaches a Chinese general about striking a deal over Chinese mineral operations in South America and Africa:

TRANSLATOR
He says they want 185 billion cash,
four board seats and editorial
control over all BASH media.

CHINESE TELE-COM EXEC
He says you forget who has the
advantage. Your country betrayed
its workers so that the very few
may be very wealthy.

Now we make your phones, your
cooking utensils even the silky
clothes your women wear when you
make love to them. We do not need
you. Because we already own you.

Naturally, whether this scene is something that bothered the Pentagon is something we’ll have to try to confirm via FOIA requests, but its absence from the film is curious, given the relative truth of what is said.

The other major changes concerned the Drask character, who is as old school as they come.  The initial draft had him as openly racist and homophobic, but no one confronts this.  He later joins the comet denial movement.

PHILLIP (SOT)
That’s right Harrison. The Impact Deniers led by Congressman Louie
Tenant are tapping into a grassroots anger with the system.
Benedict Drask himself just gave a Com-denier speech that has the
whole movement buzzing on their website of choice: Dark 9.

CELL PHONE VT: Drask talking to a few hundred people in a
park with Tenant and Dr. Ginnerson behind him.

BENEDICT DRASK (SOT)
I got right up there to the edge of space… And I didn’t see anything!
And why? Cause there’s nothing up there to see!

As a military veteran and the only military hero of the film, this was obviously unacceptable to the DOD.  The scene revealing that Drask has become a denier was cut, and instead his appearance in the third act was quite different:

EXT. FRONT LAWN OF A HOME – SAME TIME
Drask is firing a machine gun at the sky and screaming. When
it’s out he takes out his hand gun and fires it at the sky.

The other major scenes involving Drask were also rewritten – the first where he is shown with children doing exercises on the White House lawn as part of a government health program.  The draft has him using openly homophobic language, whereas in the film this was toned down and replaced by him calling the children ‘pussies’, and even this brings a response from the president.

EXT. WHITE HOUSE FRONT LAWN 3 YEARS EARLIER – DAY
A HUNDRED CHILDREN between the ages of 8-11 are doing jumping
jacks on the White House Front Lawn while BENEDICT DRASK, 49,
leads them on.

BENEDICT DRASK
You goddam lard ass! You look like a bunch of pussies!!

Along the same lines, during the launch scene before the rockets turn back to Earth, Drask is on the radio to mission control and says openly bigoted things in the earlier draft:

BENEDICT DRASK
6 minutes from main engine cut off.
Everything is A-OK. Just wanna say
hello to everyone on earth.

All the proud white folks, the
Mexicans, great food. The Arabs, at
least the ones who don’t act all
crazy. The Fairies, the Chinamen,
your babies are really cute. And
the negroes. Especially when you’re
calm and not all jacked up and-

BENEDICT DRASK
And a big hello to that beautiful
blue ball we call home. All those
hard working white folks. God bless
ya!

These changes successfully transformed Drask from a middle-aged bigot into an eccentric boomer who says politically incorrect things, and it’s clear the military and the president recognise that even the diluted version of his comments are questionable.  Collectively, these changes removed the DOD from having any role in spying on, harassing or locking up the scientists (while the FBI, the White House and other parts of the civilian government do this continuously), and watered down Drask to make him less offensive, and perhaps even charmingly off-beat.

Rather than the DOD being the primary targets of this apparent ‘satire’ about climate change, when they account for around 93% of all the fuel consumed by the US government, the Pentagon were sidelined in favour of pinning everything on the news media and the White House.  These are the benefits of a sophisticated entertainment liaison office, but all they accomplished was to make a confused, badly-written film even worse.