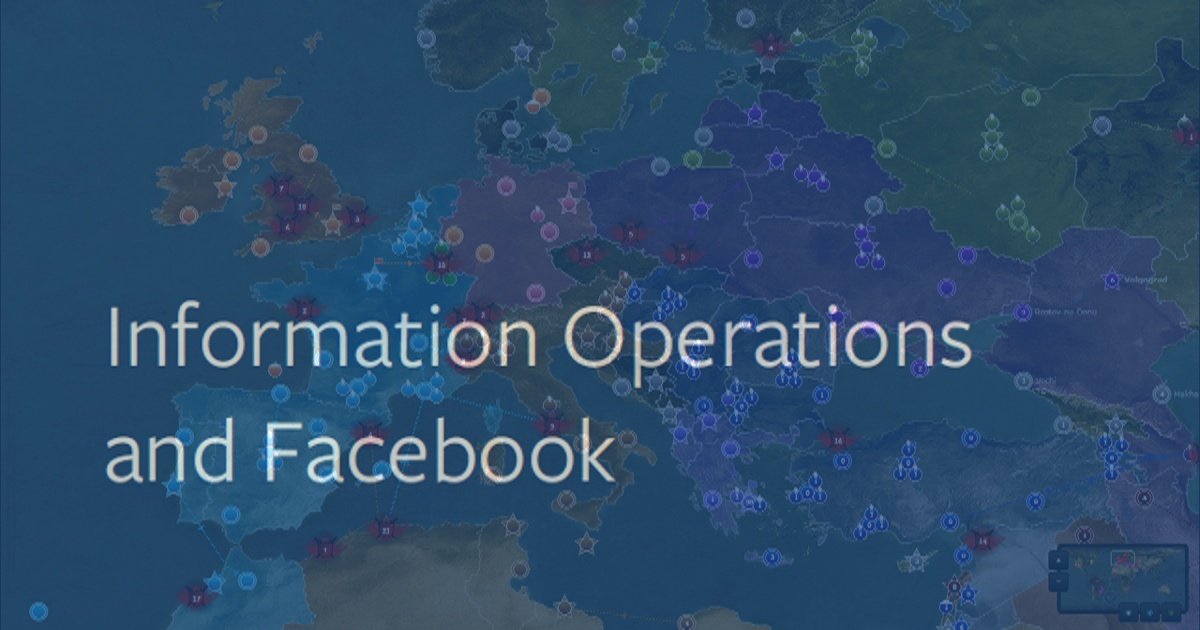 A new report by Facebook’s Threat Intelligence team says that the site is rife with fake accounts spreading fake news stories for political, social, cultural and economic reasons.  Viewers of the recent season of Homeland will be thinking ‘no shit’.  Then they’ll be thinking ‘wait, Facebook produces intelligence assessments just like the CIA?’

The report explains that they are increasingly concerned with Information Operations, which is the same name the Pentagon and CIA give to their plans and projects in this area.  Facebook define Info Ops as:

Actions taken by organized actors (governments or non-state actors) to distort domestic or foreign political sentiment, most frequently to achieve a strategic and/or geopolitical outcome. These operations can use a combination of methods, such as false news, disinformation, or networks of fake accounts aimed at manipulating public opinion (we refer to these as “false amplifiers”).

So, pretty much the same way the Pentagon and CIA defines their plans and projects in this area.

Essentially, the problem is that a small number of people can run thousands of facebook accounts, produce a video or a meme or an article on Before Its News (which should really be called ‘Never Going to be News because it isn’t’) and then promote the hell out of it, sharing it and liking it hundreds if not thousands of times and artificially generating a ‘viral internet’ phenomenon.

Yes, just like on Homeland.  The most eerily prescient, ripped-from-the-headlines TV show in the world has done it again, featuring a storyline that is as real and current as the nose on your face.  And just like in Homeland, facebook’s report acknowledges the problem of the rapid rise of the term ‘fake news’ and how it lacks any proper definition:

The term “fake news” has emerged as a catch-all phrase to refer to everything from news articles that are factually incorrect to opinion pieces, parodies and sarcasm, hoaxes, rumors, memes, online abuse, and factual misstatements by public figures that are reported in otherwise accurate news pieces. The overuse and misuse of the term “fake news” can be problematic because, without common definitions, we cannot understand or fully address these issues.

So, they break down their lingo as follows:

Information (or Influence) Operations – Actions taken by governments or organized non-state actors to distort domestic or foreign political sentiment, most frequently to achieve a strategic and/or geopolitical outcome. These operations can use a combination of methods, such as false news, disinformation, or networks of fake accounts (false amplifiers) aimed at manipulating public opinion.

False News – News articles that purport to be factual, but which contain intentional misstatements of fact with the intention to arouse passions, attract viewership, or deceive.
False Amplifiers – Coordinated activity by inauthentic accounts with the intent of manipulating political discussion (e.g., by discouraging specific parties from participating in discussion, or amplifying sensationalistic voices over others).

Disinformation – Inaccurate or manipulated information/content that is spread intentionally. This can include false news, or it can involve more subtle methods, such as false flag operations, feeding inaccurate quotes or stories to innocent intermediaries, or knowingly amplifying biased or misleading information. Disinformation is distinct from misinformation, which is the inadvertent or unintentional spread of inaccurate information without malicious intent.

This is all perfectly accurate, but it’s the sort of thing you’d expect to see in a sociological study of news media and social networks interacting, not an intelligence report by the social network itself.

The Collapse of Faith in the State

Aside from the promotion/demotion of particular causes, political parties and candidates and or beliefs and ideologies, the most interesting purposes for the Information Operations observed by facebook intelligence were:

Sowing distrust in political institutions: In this case, fake account operators may not have a topical focus, but rather seek to undermine the status quo of political or civil society institutions on a more strategic level.

Spreading confusion: The directors of networks of fake accounts may have a longer-term objective of purposefully muddying civic discourse and pitting rival factions against one another. In several instances, we identified malicious actors on Facebook who, via inauthentic accounts, actively engaged across the political spectrum with the apparent intent of increasing tensions between supporters of these groups and fracturing their supportive base.

In particular the social-political-cultural polarisation we have witnessed, and the sense that this is being deliberately encouraged by hidden forces, is confirmed and evidenced by this report.  Likewise the general loss of faith in the state – both the government specifically and the status quo more generally – is partly the resulted of Information Operations.

So, some cunning fuckers out there are using facebook’s built-in algorithms for determining what does and doesn’t show up on people’s feeds to help create bubbles of people who only interact with people of similar tastes and political persuasions.  At the same time the same or other cunning fuckers are pitting these people against one another in a strategy of tension.  Virtual Gladio for the Hyperreal Generation.  The upshot of this is a general fragmentation of the social-political spectrum and the erosion of faith in the system.

In the longer term this is all a reflection of the loss of mass public belief in overarching ideologies and narratives, what Lyotard called the Postmodern Condition.  The internet has made clear that in fact there are a lot of different people out there with lots of different values, beliefs, ideals and ambitions.  It has not only made that clear, it has made it possible for all the weirdos to realise they aren’t as lonely or uncommon as they used to think they were.  The internet is full of cranks, crackpots, fanatics, lunatics, freaks, obsessives and eccentrics of all imaginable stripes.  That’s what makes it great.

But this presents an enormous problem for democracy, which at least to some extent is about rule by consensus.  Sure, the present government in Britain got elected by winning the votes of just under a quarter of the electorate but they still had to persuade those 11 million people to vote for them.  In the early days of the internet certain progressive idealists thought that it would help break down barriers between people and make building a democratic consensus in favour of a more peaceful, just and equitable world an easier task to accomplish.

Or at least, it hasn’t yet, and while cunning fuckers continue to do their cunning fuckery it isn’t looking likely for the time being.  This makes elections extremely difficult to predict, and even more difficult to win.  Leaders with cult followings, who are loyal regardless of reality, are likely to become the new normal.

Of course, the great irony is that it is the technology that facebook has created that makes this possible.  By favouring posts that have quickly gained a large number of likes, which inherently amplifies that content’s likes (and comments, other ‘interactions’) they have created a law of increasing returns if you market your content effectively.  The creation of pseudo-viral phenomena is almost guaranteed by the structure of facebook itself.

Perhaps even more absurd is the possibility that one division of facebook is actually running some of these Information Operations while being spied on by the facebook Intelligence unit.  Whether they are doing so for internal reasons, outside paymasters, intelligence agencies, political organisations or others with a vested interest, I don’t know.  But if I was a gambling man I’d bet that this is going on.

As such, facebook’s list of things they’re doing about this reads like a fart in a wind tunnel:

Facebook works directly with candidates, campaigns, and political parties via our political outreach teams to provide information on potential online risks and ways our users can stay safe on our platform and others. Additionally, our peers are making similar efforts to increase community resources around security.14 However, it is critical that campaigns and parties also take individual steps to enhance their cybersecurity posture. This will require building technical capabilities and employing specific industry-standard approaches, including the use of cloud options in lieu of vulnerable self-hosted services, deploying limited-use devices to employees and volunteers, and encouraging colleagues, friends, and family to adopt security practices like two-factor authentication. Individual campaigns may find it difficult to build security teams that are experienced in this level of defense, so shared managed services should be considered as an option.

Governments may want to consider what assistance is appropriate to provide to candidates and parties at risk of targeted data theft. Facebook will continue to contribute in this area by offering training materials, cooperating with government cybersecurity agencies looking to harden their officials’ and candidate’s social media activity against external attacks, and deploying in-product communications designed to reinforce observance of strong security practices.

Journalists and news professionals are essential for the health of democracies. We are working through the Facebook Journalism Project15 to help news organizations stay vigilant about their security.

In the end, societies will only be able to resist external information operations if all citizens have the necessary media literacy to distinguish true news from misinformation and are able to take into account the motivations of those who would seek to publish false news, flood online forums with manipulated talking points, or selectively leak and spin stolen data. To help advance media literacy, Facebook is supporting civil society programs such as the News Integrity Coalition to improve the public’s ability to make informed judgments about the news they consume.

Lots of outreach, discussions, blah blah.  No intention of considering how facebook’s own structure made this inevitable.  No understanding of the longer-term trajectory which facebook’s very existence has accelerated.  Why?  Because political advertising on facebook, which includes an enormous amount of fake news, is one of their few sources of legitimate revenue.