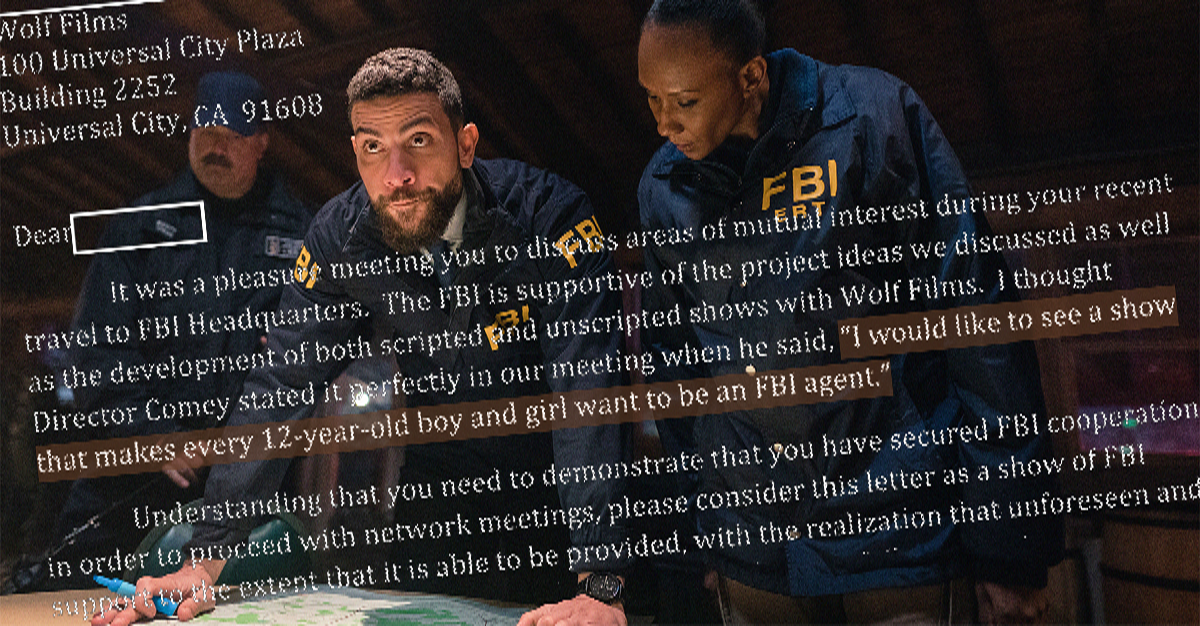 In 2015, legendary TV producer Dick Wolf approached the FBI about developing scripted and unscripted products based around the Bureau.  Among a batch of documents recently provided by the FBI from their media office is a formal letter for Wolf to shop around to prove he had the Bureau’s support.  Since then, Wolf has produced four separate FBI-themed TV shows.

The FBI’s file on media relations (80-HQ-1077659, for anyone keeping count) goes back decades, and I am gradually trying to piece it together via FOIA requests.  The latest bunch of documents is the first in a string of releases covering recent years, so there should be more coming as my requests continue to be processed.

One of the highlights is a formal letter to Dick Wolf from FBI Assistant Director for Public Affairs Michael Kortan, effectively a Letter of Intent confirming that the Bureau were interested in working with Wolf to develop a range of TV shows.  The idea was that Wolf could show the letter to networks to prove he had provisional backing from the Feds.

It was a pleasure meeting you to discuss areas of mutual interest during your recent travel to FBI Headquarters. The FBI is supportive of the project ideas we discussed as well as the development of both scripted and unscripted shows with Wolf Films.  I thought Director Comey stated it perfectly in our meeting when he said, “I would like to see a show that makes every 12 year old boy and girl want to be an FBI agent.”

He went on to say that ‘The FBI is very interested in developing a relationship with Wolf Films.  Collaboration with one of the most iconic names in television would certainly result in success across many platforms.’  Kortan offered up a surprising amount of support for shows that hadn’t even been conceived yet, writing:

The FBI does plan to provide production personnel access to the information and subject matter experts necessary to develop programming and/or treatments. Those projects requiring access to activities surrounding ongoing investigations would then be presented to FBI executive management, appropriate US Attorney’s Offices, and local authorities for their consideration.

The upshot of this appears to be four TV series, all produced by Wolf.  In 2017 we got the fly-on-the-wall documentary series Inside the FBI: New York, and the following year the CBS drama FBI began broadcasting its first season.  Since then, two spin-offs – FBI: International and FBI: Most Wanted have debuted, beginning a whole FBI televisual universe to go along with Wolf’s Law & Order and Chicago Fire – Chicago Med – Chicago Justice universes.

The man who rebooted the LAPD series Dragnet has spent his life making copaganda, and other propaganda for US law enforcement, so this document should come as no surprise to anyone who has kept an eye on Dick Wolf’s fascistic fetishising of government officials in uniform touting guns and telling us who is guilty and who isn’t.

However, the Bureau previously told me that they gave no support to Wolf’s FBI, or at least could find no records of support to the series.  This letter proves that this isn’t true, because there’s no way it’s just a coincidence that within three years of these meetings Wolf had created both a scripted and an unscripted documentary series about the FBI, just as he’d discussed with James Comey.  And, lest we forget, the cast of CBS’s FBI have themselves admitted that the series is propaganda for the Feds.