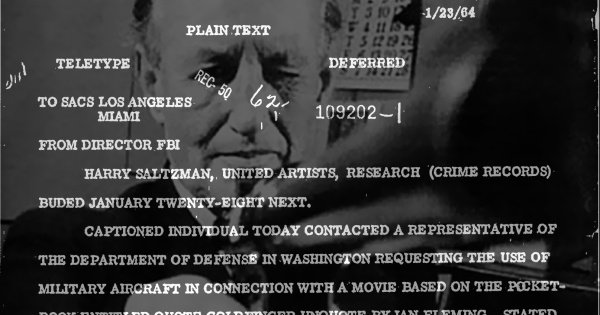 Ian Fleming and the FBI

There have been a lot of stories in the news this week about the release of FBI documents on Ian Fleming.  The documents are not a file on Fleming – he was never the subject of Bureau investigations – but are instead a response to a request from the makers of Goldfinger.  One of the producers (and former member of the Psychological Warfare Bureau) Harry Saltzman had reached out to the DOD for permission to use military aircraft in the movie, presumably for the Fort Knox sequence.

In the film adaptation the FBI helped to bust up the Fort Knox operation (in the book it is the CIA) and so when Saltzman asked the USAF for help details of the project were immediately passed on to the Bureau.  The FBI documents show how they contacted Saltzman to warn him off mentioning them by name, and that they considered Fleming’s books to be full of ‘sex and bizarre situations’ and thus ‘not the type with which we would want to be associated’.  Any mentions of the FBI were removed from the final screenplay and the finished film.

What is particularly amusing about all this is the way the press are pretending these are new releases, as though we haven’t seen these documents before.  The Guardian, the Daily Mail, the Telegraph, NPR and others have all referred to these as ‘newly released documents’, even though the FBI’s own website clearly states that this is an ‘old release’.  The reality is that these documents were available on the FBI’s site back in 2004 but were removed sometime since then before being republished this week.  In the meantime one James Bond fansite reported on the documents back in August of this year.  I myself filed a FOIA request for the documents in February of this year and they were released to me in April.  To prove I’m not making this up, here is a photo of the FBI’s response to my FOIA request: Indeed, the documents were first released in 1980, when renowned columnist Jack Anderson obtained them via a similar request.  So their journey in and out of the memory hole is quite an extended one, with multiple chapters spanning several decades.  Aside from reading the documents, which you can download here, I can only advise you to keep an eye out for the same ‘newly released’ files appearing in the news in approximately 2024.