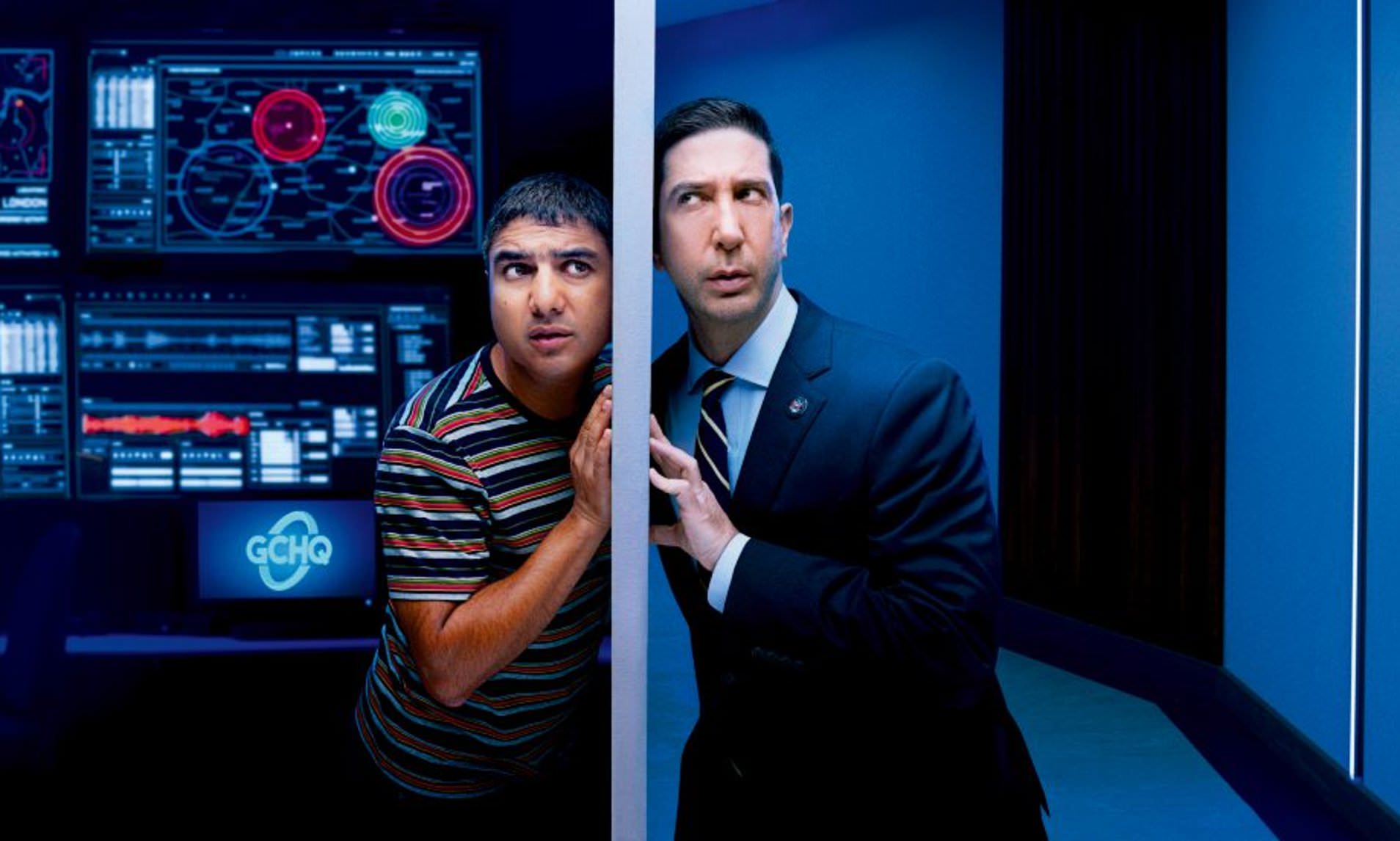 I tried something a bit different to my usual approach – a lighthearted, daft-minded video critique of the new Sky TV comedy Intelligence. It stars David Schwimmer and co-stars/was written by Nick Mohammed. I present the evidence of GCHQ’s involvement in the show, and how it functions as propaganda to rehabilitate GCHQ’s image in the wake of revelations about their mass surveillance, hacking operations and involvement in extra-judicial assassinations via the drone program. I also take the piss out of it quite a lot because it truly is that bad, both politically and as a piece of entertainment.

“We hope that everyone at GCHQ is as excited about this series as we are… I presume they were aware of this series being green-lit way before we ever were.”
– David Schwimmer

David Schwimmer’s new “comedy” Intelligence is one of the least funny TV shows I have ever seen.

It’s also a piece of propaganda for GCHQ, the British government’s mass surveillance agency. Both Schwimmer and his co-star Nick Mohammed, who writes the show, have given interviews saying they’d spoken to GCHQ about how the agency would be portrayed.

Interviewer: Although obviously it is a comedy, have you had any feedback from GCHQ? Because obviously you hear about films that sort of tap into the FBI or the CIA, and they do get people ‘we just wanted to get in touch’ so I just wondered if you’ve had any communication with them?

Mohammed: Yeah a little bit, I mean like obviously they’re aware because there was a press release when the show was announced and so on and so y’know they’re obviously aware and y’know, I think they’re excited to see it, I believe.

Schwimmer: We hope they are.

Mohammed: I hope they are.

Schwimmer: We hope they are, know what I mean?

In particular, Mohammed has emphasised how important he considers GCHQ to be, while Schwimmer had admitted he hopes the government like his new sitcom, and that their purpose is to celebrate the work that GCHQ does.

Mohammed: I guess it’s a workplace sitcom, set in GCHQ which is the Government Communication (sic) Headquarters so they’re like a, I guess a slightly less sexy version of MI5 and MI6. In terms of how they’re portrayed in films and things, they’re sort of quite action-y whereas GCHQ are doing a lot of data crunching and hugely important work for national security so that’s kind of the backdrop to it.

Mohammed: Particularly with GCHQ because it is shrouded in mystery.

Phillip Schofield: So you start googling GCHQ and start asking all those questions…

Schofield: And it’s not very long before – did they contact you?

Mohammed: Yeah, we kind of… yes, they reached out to us but in the way that, coz there was a press announcement about the show about a year ago, so I think y’know that they just wanted to make sure that…

Schofield: You met them. You sat down with them.

Mohammed: We met some representatives, but we did lots of research.

Schofield: Have you been told not to say anything?

Schofield: Let’s leave it there then. But they were OK with it?

Mohammed: They were fine, yeah, hopefully they’re going to really enjoy the show.

Schwimmer: Importantly, we hope they really love it because, you know, we make… We wanna celebrate the work they do and while his character is quite inept and my character is quite reckless, everyone else – in fact, predominantly women in the rest of the cast – everyone else is incredibly competent and capable and doing the good work that GCHQ does every day.

But why? Why would GCHQ want to be involved in this godawful rehash of 90s sitcom cliches?

Schwimmer: It was really important to us, and I think they just wanted to make sure, we weren’t going to be making fun of the work they actually do, day in and day out, to protect this country and others.

The main reason is that for most of its history no one knew GCHQ even existed, let alone what they were doing. But over the last decade a series of whistleblowers and leaked documents detailed the agency’s involvement in massive-scale spying on innocent people, running covert operations online and even in the drone program.

So GCHQ have embarked on a PR campaign to try to brush up their image, including allowing a Sky TV news crew into their headquarters for the first time. A few years later, Sky commissioned Intelligence, the first TV show set exclusively in GCHQ… HQ.

The show portrays GCHQ’s bulk collection of personal data as an accident, hacking into people’s computers as essential to national security and bravely protecting us against a never-ending string of threats.

The agency also arranged for a bunch of PR events in 2019, to coincide with their 100th anniversary.

This was reflected via Intelligence, with Schwimmer wishing GCHQ happy birthday on twitter, and dialogue in the show referencing how old the agency really is, making it seem like a normal part of British society.

They are also trying to boost recruitment, through everything from paying for scholarships for women to study tech subjects, to publishing puzzle books, to planting recruitment adverts in video games.

Intelligence shows the agency to be a fun, unusual and exciting place to work, and its employees doing an important job keeping us safe.

Despite its terrible jokes, terrible script and terrible acting someone likes Intelligence – so much so that it was renewed for a second season before the first episode had even broadcast. I’ll leave it to you to figure out who that might be.

Mohammed: I like the fact that GCHQ is – rightly so – shrouded in mystery so there’s quite a lot of artistic license so you can play with that as a writer, playing with people’s perceptions of the place.

Schwimmer: I think we found a really nice balance to protect the integrity and reputation of the institution and we do treat it with respect, and at the same time poke fun at the people who… these specific individuals who work there.