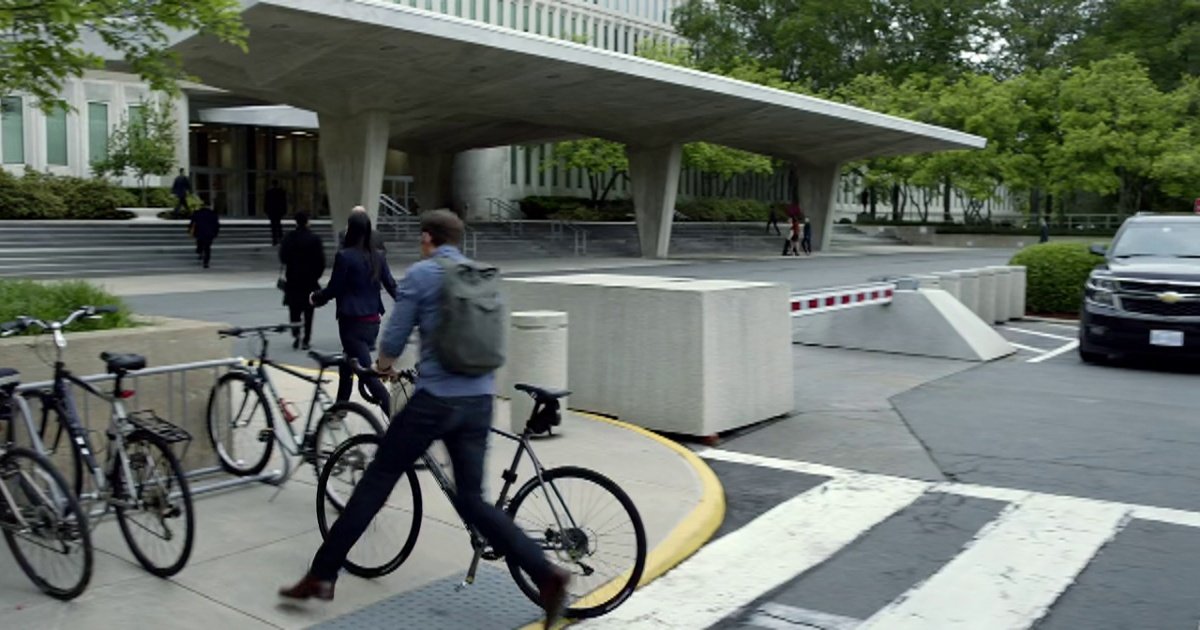 Amazon’s new headline streaming series Tom Clancy’s Jack Ryan is the first TV show to film at CIA headquarters for several years, after a fairly disastrous run that saw two awful movies along with an awful TV programme film there circa 2014.  In keeping with the CIA’s longstanding love affair with Tom Clancy and adaptations of his works, they provided special permission for the Jack Ryan producers to shoot at Langley, though there is something of a mystery as to whether they made any changes to the script.

In the opening episode of Jack Ryan we see the eponymous hero cycling to work at Langley, arriving outside the old HQ building, going up the stairs, through the doors, over the CIA seal on the floor and through the security barriers.  This is the exact same path trodden by Ben Affleck in Argo, Harrison Ford in Patriot Games, and pretty much every other actor in a scene filmed at CIA HQ.

Strangely, despite allowing the series to become the first production to film at Langley in several years the CIA included a disclaimer at the end of each episode. ‘The Central Intelligence Agency has not approved or endorsed the contents of this production’ sounds like legal bullshit.  Because it is.  We know from interviews with the showrunners Carlton Cuse and Graham Roland that the CIA reviewed the scripts for the series.  While Cuse denies that they changed anything or had any influence on the script (something Roland then contradicts) the fact that they reviewed the script and gave permission to film at Langley is an approval and endorsement of the contents.

It also begs the question: why bother with this bullshit disclaimer?  The only people who are likely to notice it are unlikely to believe it, particularly given the tiny number of productions to have been allowed to film at Langley.  Meanwhile the showrunners are out giving interviews talking about how they worked with a former CIA officer (David Chasteen) and with the CIA’s entertainment liaison office, including Kali Caldwell.  Is this sheer incompetence or sophisticated doublespeak?

Also, given that the same disclaimer doesn’t appear at the end of other productions to have filmed at CIA HQ (Argo, Allegiance, Scorpio etc.) and that we know the CIA has rewritten movie scripts before, why should we take it seriously?  Why should we believe Cuse’s claim that the CIA had no influence over the script?  Indeed, why did they bother to review the scripts if they couldn’t change anything?

I will be reviewing these issues and the whole Jack Ryan series on this weekend’s ClandesTime.