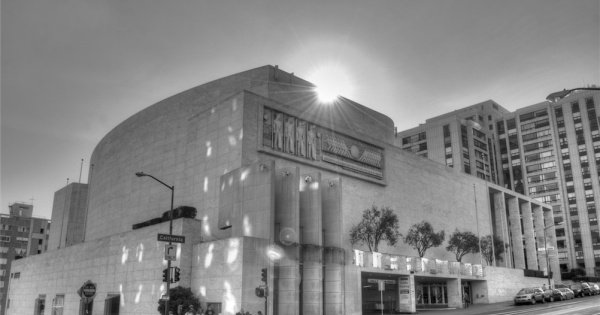 What connects the Black Panthers, the Masonic Temple in San Francisco and Jack Valenti?

What connects the Black Panther Party, the Masonic Temple in San Francisco and Jack Valenti? The answer is the award-winning 1969 movie Z, about the assassination of the Greek leftist pacifist politician Grigoris Lambrakis and the military takeover of Greece’s government.  A copy of Z went missing from the San Francisco film festival in 1969 and another copy that was loaned to the Black Panther Party that summer was only returned after a delay.  Valenti, by this time head of the MPAA, knew about this and had heard about copies of Z being available on the black market, and asked the FBI to investigate.

The Missing Copy of Z and Jack Valenti

Z was shown at the San Francisco Film Festival on October 25th 1969.  At that time it had not been released in the United States.  Two prints of Z had been sent to San Francisco by the film’s American distributors, but only one had been returned.  A San Francisco police informant went to LA in December and found that copies of Z along with other films were available for sale.  This information made it’s way to the San Francisco mayor’s office and then to Valenti, who was worried about copyright infringement and so told the FBI.  That was in January 1970, and led to months of Bureau investigations.  They received numerous confirmations that Z along with films including Battle of Algiers and Cool World were available illegally on the Hollywood black market.

However, there are some doubts as to whether the bootleg copies circulating in LA at this time had anything to do with the copy that went missing from the San Francisco Film Festival.  For one thing it seems certain that two copies had been sent to the festival, but whether two arrived was another question.  As the FBI records mention, the festival was held at the Masonic Temple in San Francisco. They interviewed various people who worked at the festival, most of whom said that they were sure two copies of Z had arrived.  One witness even specified that two were sent in case there was any problem with one of them.  However, the man who worked in the film room who actually projected the showing of Z wondered if indeed they ever had two copies.

Other witnesses to the cans holding the film reels of Z at the Masonic Temple only mentioned three or four cans, which according to interviews with those who sent the films only accounts for one copy.  It appears the FBI did not realise this at the time, that the witnesses saying there were two copies in San Francisco appear to be describing only one copy.  Another report, this time from a producer at Warner Bros. who relayed information from several other sources, suggested that the whole story was about publicity:

As such, it is not even certain that both copies of Z arrived at the Masonic Temple in San Francisco, though there appears to be no doubt about illegal copies of Z being distributed in LA in this period.  So whether the second copy truly went missing from the film festival, or was intercepted en route to the festival, or ‘disappeared’ as part of an attempt to draw attention to Z and gain some publicity and notoriety, I am not sure.

If in doubt, blame the Black Panthers

The other angle explored in the FBI file, unsurprisingly, is that the Black Panther Party were to blame.  In the summer of ’69 Z had been shown in Paris, and to the local chapter of the Black Panther Party (BPP).  The French producer of the film apparently had trouble retrieving his copy of the film from the BPP.  The Bureau’s reports also record how the actress Jean Seberg was apparently instrumental in obtaining a copy of Z for the BPP.

Additional to this, the film was shown at a BPP-sponsored anti-fascism event in Oakland, the home and origin of the Black Panthers.  However, this copy appears to have been provided by a man in New York whose name was redacted but who was a representative of Cinema V – the company who owned the distribution rights to the film in the US. Just like in Paris, the BPP were slow in returning the copy of the film, suggesting they were duplicating it before returning the original print.  Another document notes how the representative of Cinema V even had to pay for the round trip air fare so an official of the BPP could personally bring the print of Z from California all the way back to New York.

That the film was shown at the Oakland event was reported by numerous other informants and people interviewed by the FBI as part of their investigation.  However, the film was also shown at the American Film Institute and the Directors Guild around this time, so there were potentially other sources for the bootlegged copies that were available.  After the copy that was shown in Oakland had been returned, the SFPD told the FBI that the Black Panthers were planning another screening at the University of California in LA.  However, a later report from someone who was evidently present at the UCLA event said that the film was slated to be screened but at the last minute the BPP’s Minister for Education announced that Z would not be shown because it had been ‘confiscated by the fascist power structure’.

Whether or not the Black Panthers actually had an illegal copy of Z and whether they were involved in bootlegging this and other movies is not something the FBI ever established.  Though I would not put it past the BPP, and every time they got a copy of the film they delayed giving it back to its rightful owners, there is no real evidence that they were responsible.  Ultimately the FBI investigation petered out and nothing came of the months of work the Bureau put into trying to find out what was happening.  The missing copy of Z, assuming it truly was missing, never showed up.  The Assistant US Attorney for San Francisco was shown the evidence they had collected but without an obvious target or even solid proof of a crime he opted against any prosecutions.

I will be writing a third and final article in this series on Valenti soon.  For more on the Costa Gavras film Z and how the CIA referred to it as a ‘propagandumentary’ you can listen to The CIA and Hollywood episode 02.

You can download the second part of Jack Valenti’s FBI file about the Bureau’s 1970 investigation into Z, the San Francisco Film Festival and the Black Panther Party here (PDF).