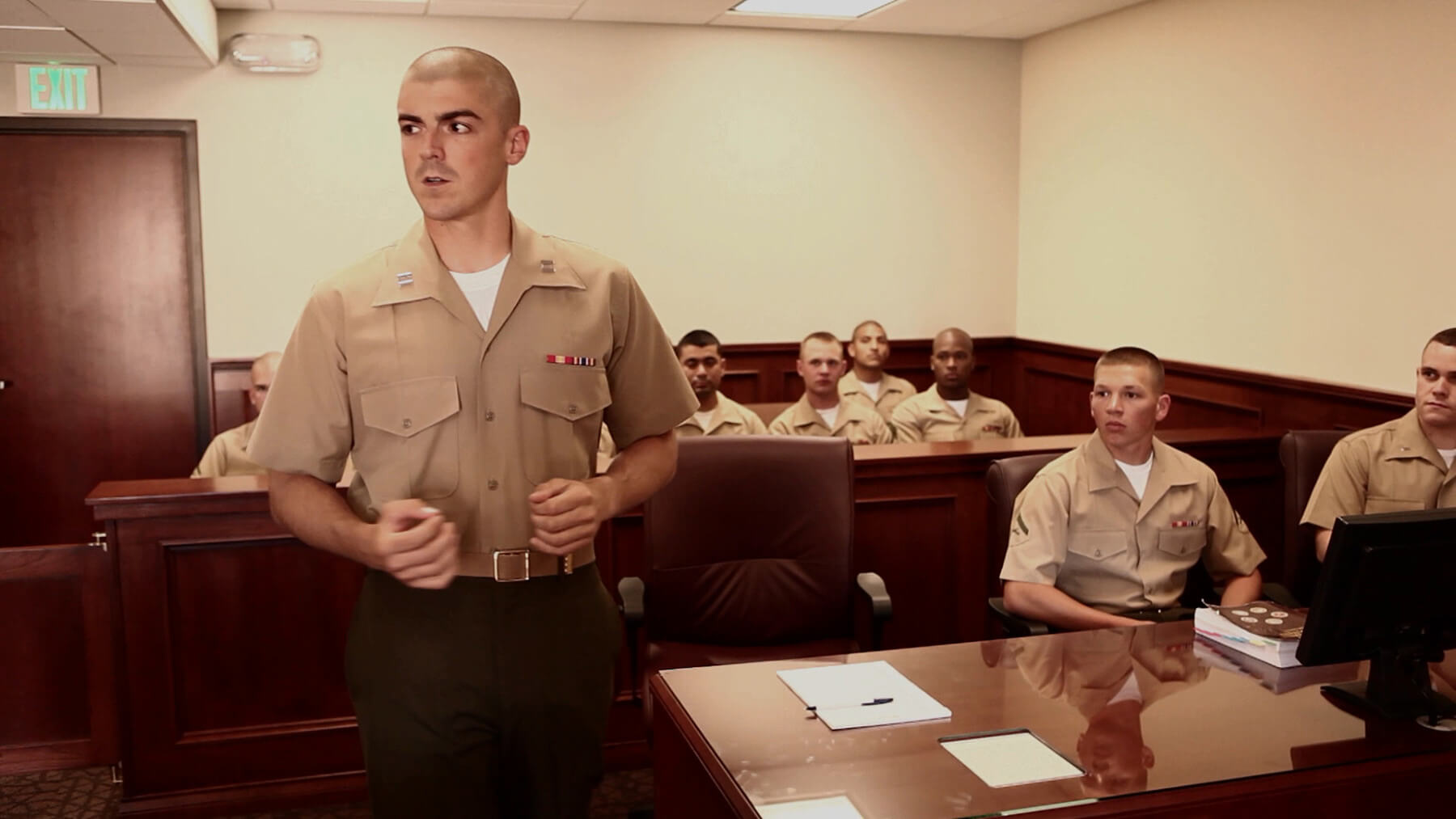 JAG: The Movie That Was Never Made

In 1988, several years prior to the highly successful JAG TV show, DOD representatives met with writers and producers to help develop a film based around the Judge Advocate General’s Corps – the criminal law section of the various branches of the US military.  Sadly, or perhaps happily, the film was never made but a file from the US Marine Corps Hollywood office shows how keen they were to help the project – as long as they had ‘editorial control’.

Military-legal dramas are often fascinating, because they offer audiences a debate about the morality of the military way of life, often exploring difficult questions about the use of lethal force as a tool of politics, and whether those granted the on-the-ground authority to use such force are ever in a position to know enough to make an informed decision.

Disappointingly, JAG was going to be a fairly by-the-books story of a marine accused of murder who has to prove his innocence – not entirely unlike the 1992 film A Few Good Men, itself loosely based on real life events.  A July 1988 memo sums up the project:

Invision courtroom drama with a brash young Navy/USMC defense counsel (David) pitted against a more seasoned, credentialed prosecuting attorney (Goliath). The three best movies which focus on courtroom drama (according to Frank Price, former President of Columbia and Universal Studios) have been Caine Mutiny Courtmartial, Anatomy of a Murder and To Kill a Mockingbird.

Successful, entertaining motion pictures involve sex and murder. The one Price wants to make will include both, as well as a subplot of lesbianism, perhaps fraternization between officer/enlisted, and will involve Navy & Marine Corps setting. Heinous ·crime may not take place on base, but in character development, etc. opportunity to film aboard ships, on base, and
perhaps at BUDs will occur.

Curiously, given the sensitivity other military branches have shown towards in-service fraternisation and romantic relationships, let alone lesbianism, there is little sign the Marine Corps had any issues with these plot points.  The producers hired John Horton – a veteran of the Pentagon’s entertainment liaison office who became a long-term liaison for the film industry to help them gain government (especially DOD) support.  He negotiated for the screenwriter Dean Riesner to take a tour of Camp Lejeune in North Carolina for research purposes and to be briefed on how the military justice system works. Following the tour the producers sent a letter to the Corps thanking them for ‘the best organized and most comprehensive
research field trip’.

The Marines also provided Riesner legal files on the case of Ronnie Curtis – a Marine who was convicted of killing his platoon commander and the commander’s wife, murders which Curtis claims he was driven to do as a result of racial abuse.  Then the production hit some roadbumps and Riesner sent a memo to Dave Tomsky – then head of the Marines’ Hollywood office – assuring him that despite the delays ‘I am still loyal to the Corps’.

In 1991 the writer and producers asked to go on a tour of Camp Pendleton, specifically to see the brig and other locations that were part of the justice system there.  An internal fax records how the writer had worked with Tomsky on the script and rewritten it to meet the Corps’ demands, so the CPEN tour was arranged.

Another fax from the script negotiation period comments:

Sex, sex and more sex.  What Marine wouldn’t love this script.  Recommend we advise ‘full support’ as this would counter the wimpy image we’ve gotten due to Pee-Wee.

This appears to be a reference to the rumour that Paul Reubens – the actor behind Pee-Wee Herman – had been in the Marine Corps prior to becoming a performer.  So far there appears to be no evidence substantiating this rumour but it clearly caused a few waves in the military PR offices.

The script notes produced from the discussion between Tomsky and Riesner are mostly concerned with legal protocols and procedures but they also insisted that the Marine Recon units ‘do not have long hair’ and are ‘not a law unto themselves’.  They also objected to a scene where suicide risk prisoner is made to sleep naked, insisting he have blankets.  They also deleted a line where a Marine refers to a waitress as having ‘D-Cup extravaganzas’.

Similarly, a letter to producer Frank Price from Riesner says:

The murdered woman, Lisa Baarnaby, will be a great deal different than the red-headed sex-pot indicated in my First Draft Screenplay. Rather than a blatant, swinging, let’s-all-take-our-clothes-off-and jump-in-the pool type, the new Lisa will have been almost prim. Her reputation aboard base is blameless. Nobody has a word to say against her. Although she is considerably younger than her husband, the Major, she is apparently the perfect service wife. One of the reasons that she seems to be so knees-together, teacup-balancing, prissy-perfect is that she never fucks anybody who isn’t every bit as vulnerable to gossip as she is.

As a result of Riesner’s willingness to make these sorts of changes, Tomsky wrote to the base commander at Camp Lejeune to say they should support JAG, describing it as the ‘ideal situation’ because it would grant them ‘editorial control over the product’.  The file doesn’t indicate why JAG never went into production, though it may be important that by the time of the later base tours and correspondence that A Few Good Men was being filmed, and drawing a lot of attention.  My best guess is that the studio didn’t fancy competing with a Tom Cruise/Demi Moore-led movie and dropped JAG from their slate.

US Marine Corps file on JAG, the unmade film