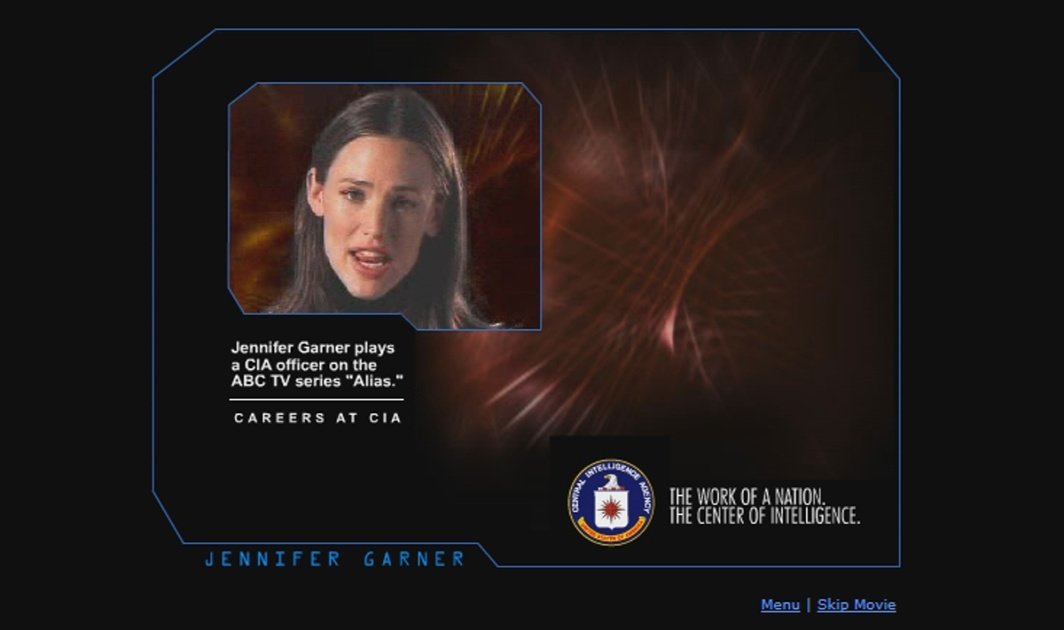 I recently obtained a copy of the notorious 2004 CIA recruitment video featuring Alias star Jennifer Garner.  This is not available anywhere else online, and the CIA did not release it in response to my FOIA request (they claimed to be unable to find a copy).  Basically, after a lot of screwing around I managed to download a version from an archive of the page on the CIA’s web site.

The CIA worked on Alias, apparently throughout its run, and producer JJ Abrams later cemented his friendly relationship with the Agency while making Mission: Impossible III.  As such their entertainment liaison Chase Brandon was familiar with Jennifer Garner, and it was Brandon who came up with the idea and approached her to appear in the video.  Even though this was reported by CBS back in 2003, the CIA redacted Brandon’s name from an article in their internal magazine What’s News at CIA. Different reports suggested there were ideas floating around for a longer video, introduced and concluded by Garner, but in the end they went for a short, simple piece direct to camera where she encouraged people to sign up and join the Agency:

I’m Jennifer Garner, I play a CIA officer on the ABC TV series Alias.  In the real world, the CIA serves as our country’s first line of defence in the ongoing war against international terrorism.   CIA’s mission is clear and direct: safeguard America and its people.  And it takes smart people with wide-ranging talents and diverse backgrounds to carry out this mission.  People with integrity, common sense, patriotism and courage – the kind of people who have always worked for the Agency.

But since the tragic events of 9/11, the CIA has an even stronger need for creative, innovative, flexible men and women from diverse backgrounds and a broad range of perspectives. Right now, the CIA has important, exciting jobs for US citizens, especially those with foreign language skills. Today, the collection of foreign intelligence has never been more vital for national security. If you’re an American citizen and seek a challenging, rewarding career where you can make a difference in the world and here at home, contact the agency at www.cia.gov. Thank you.

Garner went on to star in The Kingdom – a film which consulted with the DOD, FBI and the CIA during its production.  Her ex-husband Ben Affleck starred in Sum of All Fears and made his big-screen directorial debut with Argo, both supported by the CIA.  For a while it seems they were the CIA’s favourite couple, culminating in Affleck’s bizarre, off-kilter Oscars acceptance speech in 2013.