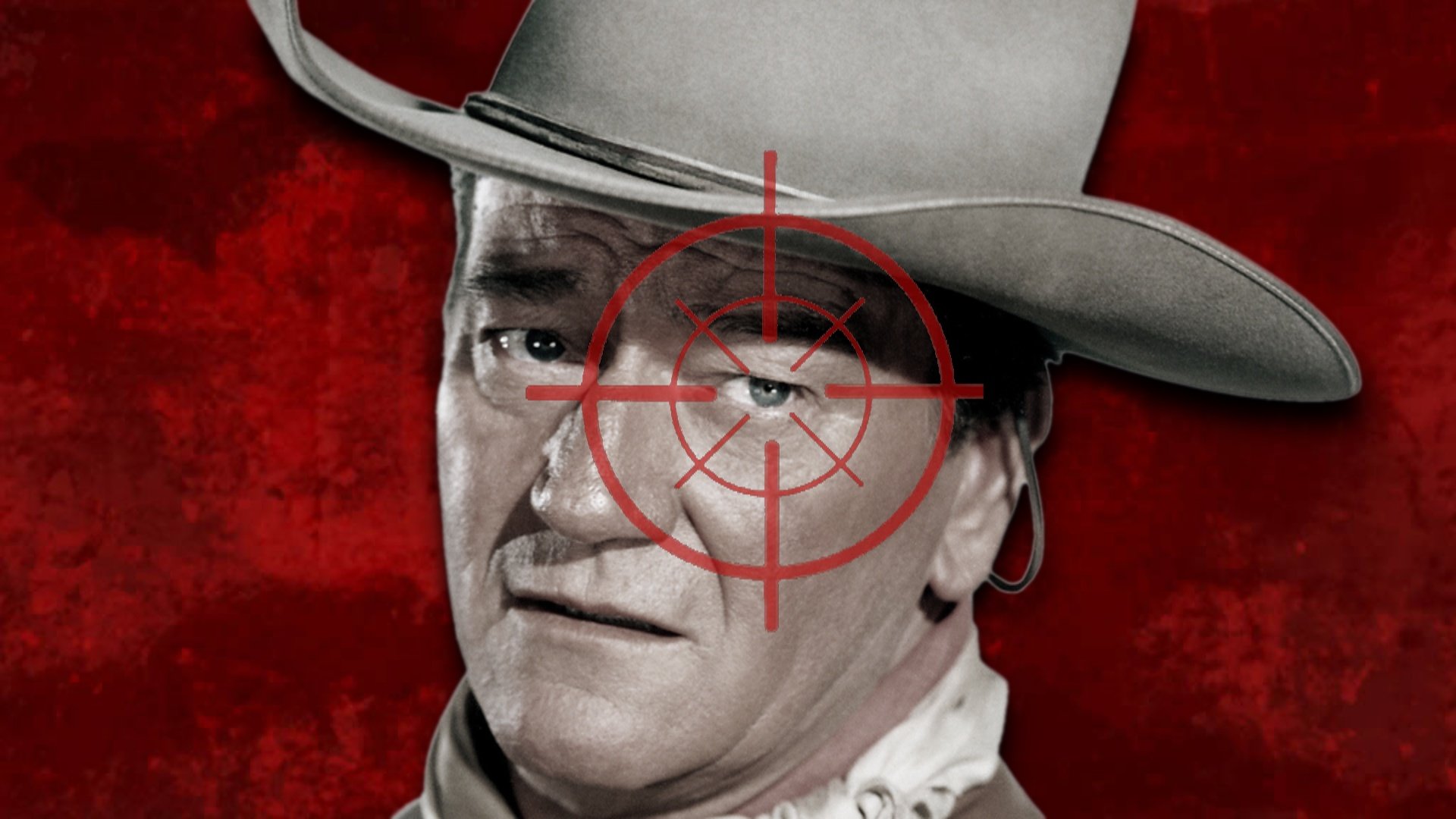 According to legend, Joe Stalin hated John Wayne and tried on several occasions to have the leading man killed.  This story has been told and re-told across books, blogs, articles, youtubes.  In every version, the FBI play a key role in stopping at least one of the supposed plots against Wayne.  But Wayne’s FBI file doesn’t mention anything about any of these state-sponsored attempted murders, begging the question of where these stories originated, and why?

As far as I know, this Stalin-Wayne assassination conspiracy theory first emerged in 2003, decades after the actor had died.  Interviews for the book John Wayne: The Man behind the Myth reported four major assassination attempts:

Further details recur in the reporting on this conspiracy theory, namely that after Stalin died Nik Kruschev supposedly met with Wayne, told him he’d rescinded the assassination order and apologised for Stalin’s craziness.

However, the timeline is all screwed up.  Stalin died in 1953, but Wayne subsequently (according to the legend) refused the FBI’s offer of personal protection and moved into a high-walled house in Burbank.  Two years later the ‘communist cells’ supposedly tried to kill him again, and unless they were operating under orders from Stalin’s ghost this appears to have nothing to do with the Soviet Union.

Where the story gets especially ridiculous in is what happened after the first murder attempt.  The FBI, having captured the two KGB would-be assassins just handed them over to Wayne to carry out a mock execution, and the red spies were apparently so scared of Stalin they offered to work as FBI informants:

Once the KGB agents entered the office, the FBI men came into the room and held the would-be assassins at gunpoint. They were driven to a remote beach where Wayne and Grant each held a gun, filled with blanks, to each KGB agent’s head. Wayne counted to three and fired. It took the agents a few seconds to realize they were not dead. Wayne turned to the FBI men and said: “Send them back to Russia.”

The terrified agents said: “No! Please! Don’t send us back to Stalin. We will both die.” At this point, it seems as if the two men were more frightened of returning home as failures than dying on that remote beach. They offered to start working for the FBI to avoid a ghastly fate in the Soviet Union.

This convenient trope of the bad Ruskie who is so scared of the government back home that they become a good Ruskie and starts working for us is a complex delusion of capitalists and the CIA.  It appears in novels, movies, spy stories and finds its way into the modern neo-Cold War news media coverage on a regular basis.  In reality, defectors usually want money more than anything else, and in the long history of Soviet defectors I can only find three that were likely assassinated by the Soviet Union.

So, is any of this true?  Certainly, if the FBI interdicted a plot against Wayne’s life and then offered him personal protection then there would be abundant documentation on this matter in his FBI file, right?

There is absolutely no mention of anything like this in Wayne’s file.  There are a couple of inserts saying several pages have been deleted due to personal privacy, and you might think the Bureau withheld any documentation relating to Wayne being the victim of a crime, hence the lack of papers on the assassination attempts.

But that’s not true either – the first document in the file is about an extortion plot against Bob Hope, Jonny Carson and Wayne, seeking to get them to speak out publicly to end government corruption, crime and drug abuse.  This information was attributed to an UNSUB (unidentified subject), who also started going on about the Rockefellers and the Trilateral Commission getting Jimmy Carter elected.

Thus, we can only assume these stories have been made up, both by Wayne himself (who apparently told these stories in private, but never in public) and by the cadre of stuntmen and other ‘man’s man’ types who lapped up every word Wayne said.  Even when, or maybe especially when, Wayne dropped this bomb in 1971:

With a lot of blacks, there’s quite a bit of resentment along with their dissent, and possibly rightfully so. But we can’t all of a sudden get down on our knees and turn everything over to the leadership of the blacks. I believe in white supremacy until the blacks are educated to a point of  responsibility. I don’t believe in giving authority and positions of leadership and judgment to irresponsible people.

Since Wayne’s FBI file contains nothing about any assassination attempts – ordered by Stalin or otherwise – what is in the documents?

I am glad you asked, because despite containing no support for an anti-communist conspiracy theory (which is rare for an FBI file from this period), there is some fun stuff in here.  One memo records how for the Bureau-supported TV series The F.B.I. Jimmy Stewart had been approached about being the narrator, but had withdrawn.  Wayne was being considered, but there was a problem – he was reported by the FBI’s LA office to be a member of the rabid John Birch Society.  Hoover ordered the Bureau to discreetly find out whether Wayne did, in fact, have an associated with JBS, though the files don’t clarify what the result of those inquiries was.

There are letters from Hoover to Wayne, congratulating him on his 1969 Best Actor win at the Oscars, and commiserating when Wayne’s mother died.  A note from the Los Angeles field office says that Wayne was on the ‘Special Correspondents List’, i.e. was considered a friend of the Bureau.

There are a bunch of random newspaper clippings, including about Wayne’s various marriages, and some other background checks when Wayne was due to be involved in White House events, all of which came back ‘no derogatory information’.

Three episodes are of particular interest.  The first is on Big Jim McClain, when a newspaper covering the filming in Hawaii reported that Wayne was playing one of two FBI agent characters.  The Special Agent in Charge in Honolulu spoke to Wayne, who confirmed that he wasn’t playing an FBI agent but an investigator for HUAC – the House Un-American Affairs Committee.  The Special Agent also spoke with the local police chief and a police captain who had both participated in the film, who confirmed that there were no FBI agents depicted in the movie.

The second curious incident occurred a few years later, when a memo records how Wayne had been linked to an attempt to overthrow the government of Panama, allegations Wayne strenuously denied.  This is one of those rare occasions that I agree with the FBI that there doesn’t seem to be any evidence that Wayne was involved in a coup attempt, but given his reputation for anti-communism it would not surprise me.

Finally, in 1960 National Geographic magazine did a puff piece on the FBI, including an extensive photoshoot.  Among the participants in the shoot was – no surprise – Wayne himself.  He was photographed on the set of the movie Go North, about the early history of Alaska, being interviewed by an FBI agent.  A memo about the Nat Geo article says:

This places an agent in modern day business attire in an unusual setting and adds to the scope of activities which agents are involved in daily through the country.  A rugged looking agent approximating John Wayne’s size was chosen for this particular photograph.

The memo goes on to say of Wayne:

Mr Wayne was extremely enthusiastic about being of assistance in connection with being photographed with an agent.  He has long been an outspoken foe of communists in the film industry and generally, and when approached with the proposal for this photograph he said in effect, “If it is for the FBI I will do anything for them.”  He then uttered a good natured oath and added, “If they want me to I will even be photographed with an agent and point out a Communist for them!”  Wayne also said that he would like to extend his regards to the director, and said, “Tell Mr Hoover I am on his side.”

‘I will do anything for them’?  Would this extend to making allegations against people in the film industry, and fabricating assassination plots that make the FBI look heroic and badass?  Why yes, I think it might.  Particularly when doing so burnished Wayne’s reputation as the paragon of American masculinity and a right-thinking approach to the world.

I think we may have solved this one, and the short answer is that John Wayne’s full of shit, and hard right anti-communists are just as capable of fantasy self-victimisation to make themselves look tougher than they really are as anyone else, anywhere on the political spectrum.