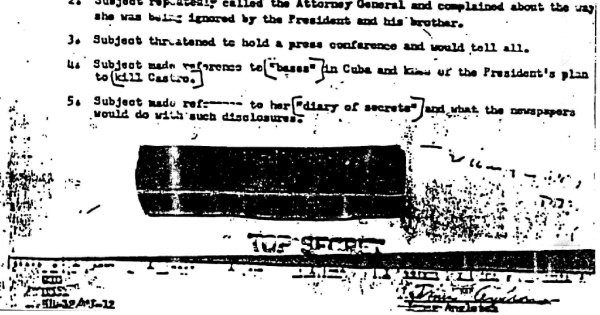 Right up until her suspicious and much-discussed death in 1962 Marilyn Monroe was under surveillance.  The FBI were keeping tabs on her, the Mafia had a private detective bug her phone and house, and this memo seems to confirm that the CIA were also monitoring her.

Dated August 3rd 1962 (only three days before she died) it references wiretaps of conversations between ‘reporter Dorothy Kilgallen and her close friend, Howard Rothberg’ and ‘Marilyn Monroe and Attorney General Robert Kennedy’.  It is not clear whether these wiretaps were the CIA’s own work, or whether this came from the FBI or from the taps run by Fred Otash on behalf of Jimmy Hoffa.  The memo lists five pieces of apparently relevant information gleaned from the taps:

1. Rothberg discussed the apparent comeback of subject with Kilgallen and the break up with the Kennedys. Rothberg told Kilgallen that she was attending Hollywood parties hosted by the “inner circle” among Hollywood’s elite and was becoming the talk of the town again. Rothberg indicated in so many words, that she had secrets to tell, no doubt arising from her trists with the President and the Attorney General. One such “secret” mentions the visit by the President at a secret air base for the purpose of inspecting things from outer space. Kilgallen replied that she knew what might be the source of visit. In the mid-fifties Kilgallen learned of secret effort by US and UK governments to identify the origins of crashed spacecraft and dead bodies, from a British government official. Kilgallen believed the story may have come from the New Mexico story in the late forties. Kilgallen said that if the story is true, it would cause terrible embarrassment for Jack and his plans to have NASA put men on the moon.

2. Subject repeatedly called the Attorney General and complained about the way she was being ignored by the President and his brother.

3. Subject threatened to hold a press conference and would tell all.

4. Subject made reference to “bases” in Cuba and knew of the President’s plan to kill Castro.

5. Subject made reference to her “diary of secrets” and what the newspapers would do with such disclosures.

The document appears to have been signed by head of CIA counterintelligence James Jesus Angleton:

While some argue that the document is authentic there is room for doubt.  When you look at the full thing there is an oddity where sections of the text that are distinctly lighter in colour than the rest: This could be the result of anything from bad photocopying to bad photoshopping and it does not affect the more potentially controversial material in the lower half of the page.  There is also the designation ‘TOP SECRET’ which seems like overkill given the actual material contained within.  So this memo may or may not be genuine, but nothing within the memo itself gives cause for a strong opinion either way.  It certainly looks like a lot of other CIA documents from this period, but that in itself would not be hard to fake.

If it is genuine then it does confirm numerous details – that Monroe was under surveillance, that she was having affairs with both John F Kennedy and Robert Kennedy, that they both broke it off with her and this angered Monroe and made her threaten to go public, and that she had a little red book, a diary of secrets.  This diary went missing in the aftermath of her death, like certain other diaries that Angleton was interested in.