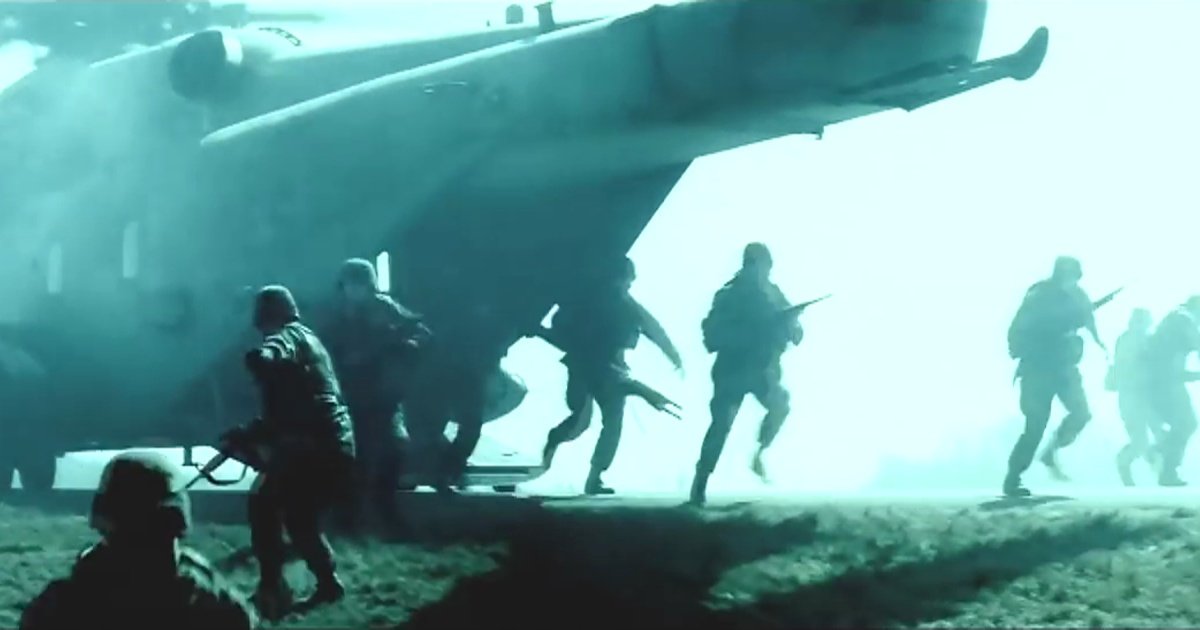 Marine Corps emails on The Sum of All Fears

2002’s The Sum of All Fears was the fourth major film adaptation of Tom Clancy’s spy novels and perhaps the most visually spectacular.  The part where terrorists nuke the Super Bowl, destroying Baltimore in the process, is one of the best nuking-a-city scenes ever committed to film.  Recently released emails reveal new details of US Marine Corps support for the film, including how they replaced an actor with one of their own soldiers, and were unimpressed with the grooming standards of the Canadian extras.

The emails were finally released to me this week, after a protracted FOIA battle beginning last August.  Most of the communications are concerned with practical concerns – costs, times and dates, and arranging for Marines to be deployed into Canada for filming.  However, both a set of production notes and emails about the Pentagon’s script review process provide us with some new, relevant information.

USMC Production Notes on The Sum of All Fears

The emails cover the period February to June 2001, and the only assistance the Marine Corps provided was in filming the above scene where Marines arrive after the nuclear explosion and rescue the President (Morgan Freeman, in his approximately 62nd outing in the role).  This was filmed in April near Montreal, and afterwards someone in the USMC entertainment liaison office (most likely the project officer Matt Morgan) wrote up a set of Production Notes, effectively an after-action report. While we were bringing 40 Marines to the location, I found out that there was a actor who was hired to play the Marine with the ad-libbed rescue dialogue. I insisted that it be an actual Marine in the scene. They still paid the actor and had the senior enlisted Marine who was in charge of the extras action deliver the lines. In the end the production was happy- they even gave the MSgt credit.

While the only appearance of the Marine Corps in The Sum of All Fears is entirely positive, they still wouldn’t let an actor portray the only Marine to have a minor speaking role.  It isn’t clear exactly why this mattered to the USMC, but it illustrates the power the DOD has over a production like this.  The producers still paid the actor even though the military insisted he be replaced by a real soldier.  Why didn’t the producers just say ‘fuck off, we’ve already paid him, he’s doing it’?  Admittedly, the creative people in Hollywood are used to being bullied by studio executives and therefore being a spineless suck-up is probably an advantage in that world, but it’s odd that this tiny detail that no one in the audience would have noticed mattered so much to the USMC.

The other note of interest is the criticism of the Canadian extras who were also portraying US troops:

Working in Canada is different… the crew is quite different from an American crew and the local extras are not very good at portraying US military personnel.  There have been several Canada-based productions (including SOAF) in which extras showed up in uniform with beards, blouses/jackets unbuttoned, etc, boot laces hanging out, etc. Whenever there is ANY military portrayal (sometimes b/g not appearing in script), the project officer must be on set.

This is not just amusing, it highlights the problems of an increasingly globalised film industry.  As more countries recognise the benefits of hosting Hollywood productions they are coming up with bigger and better ways to encourage producers to pick them over other possible locations.  This is active within the US, where New York State allocates over $400 million per year to entice film and TV producers, leading to California increasing their expenditure on luring film-makers to over $300 million in an attempt to woo them back.  However it is internationally where this is most important, with Colombia (60% cash rebate), Fiji (50% cash rebate) and Canada (30% to 70% tax credits) leading the way.  Dozens of countries now refund between 20% and 40% of the costs of filming on their soil, which can run to tens of millions of dollars on a single production.

One of the problems resulting from this is the inevitable clashes of cultural values, standards and expectations.  When a half-foreign, half-local film crew have a hectic schedule these sorts of confrontations and arguments are to be expected.  However, this is slightly different because it’s the officers of a foreign government telling local extras that they aren’t up to scratch.  Again, why are the DOD even in a position to say anything about this?  If the producers don’t care whether the extras portraying the military are clean-shaven or bearded then why does the Marine Corps have any right to make that decision for them?

Why do beards matter?  Because in the cinematic world, everyone with a beard is either a hippy or a terrorist.

How the Pentagon Reviews Movie Scripts

The Sum of All Fears received assistance from all four branches of the US military, with the Air Force taking the lead.  As a result, all four branches had to review the script, even the USMC who were providing very limited assistance.  An early email to Executive Producer Stratton Leopold (with a name like that what else was he going to do but become a movie mogul) says:

The Marines as extras wearing their uniforms is also a no-go until we see the script and talk with the production company. This was true of “The Bourne Identity” on which Marines in Prague recently worked, and “Blackhawk Down”, where they would not be wearing their uniforms and working only as Ranger Extras. In both cases, we vetted the script before approving such limited assistance.

Another internal USMC email discussing whether or not to dress the soldiers in the ‘new utility uniform’ is worth quoting at some length:

“The Sum of All Fears” is based on a Tom Clancy cold war story that has been adapted to fit the postSoviet era. The hero of the picture is a young Jack Ryan (played by Ben Affleck as a 20-something version of a character made famous by Alec Baldwin and Harrison Ford.) At this point, early in his career, Ryan is an analyst on the Russia desk at CIA It takes place in the “not-so-distant future”.

The story follows a terrorist (Neo-Nazi) plot to ignite a nuclear war between a politically unstable Russia and the United States. This terrorist plan hinges on a “small” nuclear device being detonated during the Super Bowl in Baltimore. The device goes off as planned, killing hundreds-of-thousands in the Baltimore Metro area and very nearly the President himself. Of course, Ryan is the only guy who can figure out that the Russians are not responsible for the attack, and persuades the Russian and U.S. Presidents to standdown from the brink of war (sorry if I ruined the ending.)

The only USMC involvement (other than VERY background portrayal of CMG as part of the JCS) is the rescue of the President. CIA manages to uncover the plot in time to whisk the President away, but his motorcade is tossed off the road at the very edge of the blasts’ shockwave. Marines quickly descend on the scene, secure the President, and fly him to Andrews where NAOC awaits.

The production has asked for helos and Marines to snatch the “President.” The filming is in Canada, but DoD has the agreement of the Canadian government to clear our assets into the country. MarForRes has indicated that support is feasible. The tentative plan involves a 4th MAW HMH det and 4th Division Marines. We are currently researching options to provide our Marine “snatch team” with the new Cammies. This will help us to visually separate the Marines from the Natn’l Guard and Air Force who appear in the film in “BDUs,” and is a nice tie-in to the black-on-gray “MARINES” on the side of the helos.

DoD has addressed all command and control issues in the script, and the Air Force will be lead project, given the extensive USAF portrayal (AF-ONE, NAOC, NORAD, etc.) The Navy also has a big dog in the fight: A CVN takes hits from a Russian cruise missile strike. These concerns, however, are being addressed by my sisters here on deck, and there are no USMC “red-flags” in the script

While the US Marine Corps had no objections to the script (probably because they’re only in it for one rescue scene where they are the heroes) the US Navy did have some issues.  One scene where the terrorists attack an aircraft carrier was altered:

In the original screenplay of ”The Sum of All Fears,” for example, the carrier was blown up by one or two cruise missiles. Pentagon officials said that was unrealistic, and they did not like the impression that a carrier was so vulnerable. In the end, the filmmakers accepted the Pentagon’s assertion that the carrier would not be blown up and showed only its flight operations being destroyed. This was done with miniature models and visual effects.

To avoid the appearance of vulnerability to cruise missiles and/or beards the US military made creative decisions and altered aspects of The Sum of All Fears that should have been down to the film-makers.  These USMC emails highlight how obsessive, paranoid and pedantic the military is when it comes to how they are portrayed on screen.

USMC emails on The Sum of All Fears