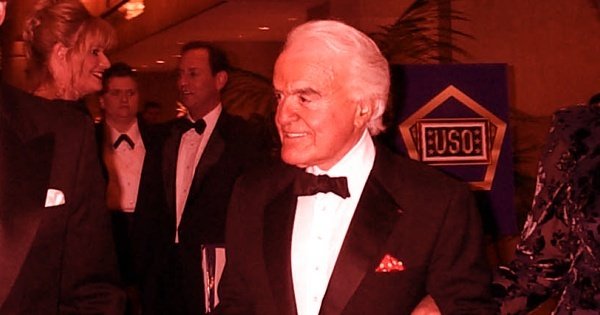 Jack Valenti’s career as head of the MPAA spanned nearly 40 years and saw the end of the production code and the establishment of the movie ratings system, the failure of the Vietnam War, the arrival of home cinema followed by the internet, and culminated in the post-9/11 propaganda push.  New details provided by the FBI files on Valenti show that throughout this period (1966-2004) he remained close to the establishment.  The Pentagon and Jack Valenti maintained good relationships as the Entertainment Liaison Offices grew in importance, and other institutions including the Institute for Creative Technologies were formed which further connect the military to the entertainment industry.

In July 1975 Jack Valenti took a flight from Washington DC to L.A. on Trans World Airlines flight 99.  As the FBI file records, Valenti was a TWA board member and so was especially surprised to find, upon retrieving his luggage, that numerous items were missing from his suitcase – an Omega wristwatch, a Panasonic razor and some sunglasses, along with two sets of ‘Presidential Seal’ gold cuff links.

The cuff links were given to Valenti by President Lyndon Johnson, presumably when Valenti left his position as a presidential aide to become head of the MPAA (see the first article in this series).  The FBI investigated, as this was technically a case of TFIS – Theft From Interstate Shipment.  Though one wonders, if someone less ‘important’ than Valenti had complained to TWA security whether anything would have been done.

After all, the FBI could do little except go and interview the people who handled the luggage at Washington Dulles airport who, quite predictably, said that they remembered nothing and that they handled too much baggage to remember specific incidents of suitcases coming open and spilling their contents.  The Bureau’s investigation lasted barely a dozen pages and went nowhere, so whoever pilfered Valenti’s cuff links got away with it.

There is no mention of any other bag on that flight misplacing its contents en route to Los Angeles so it seems Valenti’s was the only bag broken into.  This leaves two possibilities – either it was Valenti’s taste for expensive bags that caught someone’s eye (the FBI file calls it a ‘Louis Vaiton suitcase’)  or someone targeted Valenti specifically.  After all, he was a public figure of sorts, the head of a trade group representing a major section of showbusiness.  He also may have been known to TWA staff on this route because he was a board member and likely travelled between DC and L.A. frequently.  Did a light-fingered disgruntled TWA employee thieve a few items from Valenti’s suitcase as recompense for low wages and poor working conditions?  Was it the result of a more personal vendetta?  We will never know.

What we do know is that Valenti completed the work of his predecessor Eric Johnston in abolishing the production code.  The Hays Code was created by the MPAA (then the MPPDA) in 1930 to ward off any possibility of government regulation and censorship of the contents of motion pictures.  The industry argued that they could self-regulate, and produced the Hays Code as a series of moral guidelines that film-makers had to follow to get their works released.  In the late 1950s and into the 1960s Johnston began to liberalise the code, removing some of the more puritan elements (e.g. a man and a women could be seen kissing in bed, but each had to have at least one foot still on the floor).  Film-makers also began flaunting the code, and when the MPAA refused to allow a member studio to release a film they ignored the ruling and released the picture through a subsidiary.

Valenti took this one step further, scrapping the Hays Code entirely and introducing the MPAA ratings system.  Thus, the producers of films could now include gory violence, dirty language, nudity, sex and all manner of fun things denied to them under the Hays Code, but the MPAA retained its position of power over how those films were classified and thus released.  One might dwell on the parallels between government institutions classifying secrets and thus only allowing some people to see them, and the MPAA doing the same with movies.

One film that highlights this process as what it is – a mechanism for levering control over Hollywood culture – is the excellent 2006 documentary This Film is Not Yet Rated.  Kirby Dick demonstrates that the ratings agency – technically CARA, an ‘independent’ sub-agency of the MPAA – employs some very inconsistent and often hypocritical methods in rating films, typically censoring independent movies far more than big studio productions.  He also identifies for the first time members of the CARA review board and the MPAA appeals board.  Prior to this film their names, like the names of secret agents, were not publicly available.

Death Threats to the MPAA

Perhaps unsurprisingly, the MPAA has been the target of vitriol and suspicion.  Secrecy combined with power tends to produce that response from people.  A further section of Valenti’s FBI file concerns threats made to the organisation in the wake of an important court ruling over copyright.  Valenti was always concerned about copyright, and thought that the arrival of home video systems in the 1980s signalled the death of the cinema.  He was wrong, of course, and history proved that the home video market is actually helping keep afloat an industry which tends to invest heavily in dubious products (Disney I’m looking at you and thinking of John Carter).

By 2000 the issue had become DVDs and people posting the DCSS code on their websites allowing people to decrypt DVDs and save the films to their hard drives.  Of course, these days one can simply download freeware which will do it all in a matter of a few clicks but at the time the MPAA and presumably Valenti personally thought that this was important.  They took the issue to court, the court ruled in their favour and cease and desist letters were sent to those responsible.

Shortly after this ruling, the email address for sending tips to the MPAA about video piracy received a string of death threats, which were simultaneously sent to Sony and other companies involved.  The sender(s) spoke of a ‘blood list’ and stated that ‘those who have been inducted into my blood list means that I and my team of hitmen will systematically kill those who support the following in a genocidial way’.  The email then lists people and organisations including Valenti himself, the MPAA and all DMCA supporters. A further email included a link to the.MPAA.really.fuckingsucks.net which had announced a ‘jihad’ against the MPAA.  It declared that ‘The FBI, NSA and the CIA are all powerless to stop my jihad against the MPAA.  My holy war will not stop with the MPAA’.  Other threats were also received around the same time which have a similar tone and style and quite possibly originated with one individual, though the sender does repeatedly refer to their ‘boss’ being pissed off too.  The FBI investigated but hid a dead end.

In the end it proved impossible to figure out who had sent the anonymous emails and the investigation was closed out.  The fact that it was taken at all seriously is testament to how much sway Valenti and the MPAA had in government circles in exchange for the co-operation of the major movie industry.

The Entertainment Capital of the World?

On the subject of that co-operation, in 1999 the Institute for Creative Technologies was founded in California.  Funded by the Pentagon, it seeks to combine the talents of Silicon Valley and Hollywood for both military and entertainment applications.  From their own site:

Research projects explore and expand how people engage with computers, through virtual characters, video games and simulated scenarios. ICT is a recognized leader in the development of virtual humans who look, think and behave like real people.

ICT prototypes provide engaging experiences to improve skills in decision-making, cultural awareness, leadership and coping, to name a few. They allow veterans to go online and speak anonymously to an interactive virtual coach who can remotely recognize signs of depression, PTSD and suicide risk…

The ICT continues to be important enough to work on some of the biggest movies around, but aren’t big enough to have their own IMDB page.  Their list of collaborators includes the usual names like Google, Microsoft, Lockheed, General Dynamics and they have worked with every major studio in Hollywood.  Recent films that their technician Jay Busch has worked on include Point Break, Fast & Furious 7, Maleficent, Oblivion, Underworld: Awakening and TRON: Legacy. The Pentagon and Jack Valenti

While his connections to the White House, the FBI and the CIA are significant, Valenti’s relationship with the Pentagon is perhaps the most important.  In 1998 when the DOD was doing some downsizing they considered eliminating the Entertainment Liaison Offices and Phil Strub along with them.  Dozens of studio executives wrote letters to the Pentagon in support of Strub, and Valenti both wrote letters and made a personal overture to Secretary of Defense William Cohen to keep Strub’s job.

On October 17th 2001 the White House announced the creation of the ‘Arts and Entertainment Task Force’ which saw several weeks of meetings between Valenti and White House spin doctor Karl Rove.  Others from the entertainment industry were also present, and ‘the tangible outcome of these meetings were USO tours, sending first-run films on DVD and video cassette to US servicemen, public service announcements (PSAs) for both domestic and overseas markets, and input from Hollywood insiders to Congress on how to shape an effective US message.’  This process also inspired the Academy of Television Arts & Sciences to hold a panel titled ‘Hollywood Goes to War?’ which featured Bryce Zabel, Jeff Zucker, Aaron Sorkin and numerous other entertainment bigwigs.  The White House sent along Mark McKinnon and the panel was completed by none other than Phil Strub.

This solidifying relationship between the Pentagon and Hollywood, and the Pentagon and the MPAA specifically and Valenti personally is aptly demonstrated by two events late in Valenti’s life.  In 2000 the Pentagon spent $295,000 to host a star-studded dinner in Valenti’s honour.  Valenti was granted the first ever DOD’s Citizen Patriot Award, with William Cohen saying ‘Valenti has been an avid proponent of the men and women in uniform, and has used his influence to perpetuate the positive image of the military both on and off screen.’ Valenti also lobbied hard to be granted permission to be buried in Arlington National Cemetery (usually reserved for those who had died in wars).  He finally persuaded William Cohen to grant a waiver just before Cohen left office in January 2001.  Valenti then used this to try to persuade incoming Secretary of Defense Donald Rumsfeld and then Robert Gates too.  Documents released under FOIA show that ‘Valenti’s Arlington plotting was K Street smooth, from his calling Rumsfeld “Rummy” to his handwritten note reminding Rumsfeld’s Pentagon successor, Robert Gates, of a lunch they once shared at CIA headquarters.’

Why did Valenti, who ostensibly spent most of his life in Hollywood representing the major studios and implementing the ratings system, desire so strongly to be buried in Arlington?  His actual military record was minor, so unless he was serving the military in other ways while head of the MPAA then it is hard to understand why he believed he was entitled to such a burial, let alone why his request was granted.  Nonetheless, it was granted and when Valenti died in 2007 it is there that he was laid to rest.