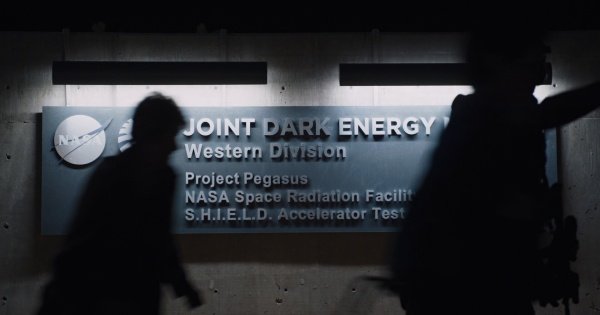 NASA Production Agreement for The Avengers

NASA’s Multimedia Liaison Office was founded in the 1990s but they have recently become more aggressively involved in the entertainment industry.  In particular they have replaced the Pentagon as the most prominent government agency working on the Marvel Cinematic Universe, the world’s biggest film franchise, working on The Avengers, Captain America: Winter Soldier, Avengers: Age of Ultron and Guardians of the Galaxy.  This is the first time NASA have released a copy of the agreements they sign with film makers, and it is the only document they released in response to a broad request about their involvement in the Marvel Cinematic Universe.

NASA and The Avengers

The opening sequence of 2012’s The Avengers (aka Avengers Assemble) was largely filmed at NASA’s Glenn Research Center in Ohio, including the Plum Brook Station which is part of that facility.  Plum Brook Station is home to the B-2 Space Power Facility – the world’s largest vacuum chamber, where they test spacecraft.  It is here that the most dramatic scenes that begin The Avengers were actually shot. Part of the agreement required Plum Brook personnel to clean out all items in the chamber so that the facility could become a bare backdrop for the customers to come in and “dress it up” as they wanted. SPF Facility Manager Jerry Carek said about 20 Glenn civil servant and support service contractors were involved in the preparation. Some helped build smaller portions of the set when needed as well. While there are thematic reasons why NASA would enjoy this scene there are more practical reasons why they were so happy to have The Avengers film at Glenn and Plum Brook.  The most obvious reason is money.  The production agreement (which NASA’s site calls a Multimedia Agreement) details that Marvel Studios paid over $150,000 to NASA for helping to make The Avengers.  It was reported that:

NASA officials were happy to get the business and hope it will be the first of many Hollywood movies filmed at the site.

This is how we survive, by allowing the private sector to use the facility as needed.  Their contributions allow us to stay in operation.

He is not kidding – according to a 2015 NASA Inspector General’s report the Plum Brook Station is a massive white elephant.  It consists of five major facilities, two of which – the Hypersonic Test Facility (a wind tunnel) and the Cryogenic Components Laboratory – had not been used in four years and another of which – the Combined Effects Chamber designed for large-scale experiments with liquid hydrogen – has never been used.

NASA established their Multimedia Liaison Office in 1997.  Given that NASA’s involvement in the entertainment industry has been followed by meaningful increases in their budget, the $150,000 dollars is peanuts compared to the promotional value NASA gained and the effect that has on Congress.

The scenes shot in NASA locations involve the Tesseract – an extraterrestrial shiny cube that is a source of energy and can be used for opening portals to other dimensions and blah blah obvious bait for people obsessed with ‘the occult’ blah blah and then Loki arrives and gets the story going.  Back in the real world, it appears that there is such a thing as ‘dark energy’ and there is a Joint Dark Energy Mission (JDEM) by NASA and the Department of Energy to find out more about it.  Curiously, the producers of The Avengers wove the real JDEM into the Avengers/SHIELD myth.  The set dressing for the opening sequences makes it clear this is a joint NASA/SHIELD research lab looking into dark energy:

In the Marvel Universe, NASA and SHIELD work on the JDEM

However, the Glenn Research Center has nothing to do with the real JDEM.  So where did this idea come from?  Was there more to NASA’s involvement in The Avengers than merely renting out a couple of filming locations?

In most ways the NASA document is just like the equivalent agreements between film makers and the Pentagon.  It guarantees NASA the power of script approval, i.e. the power to request changes in exchange for allowing Marvel Studios to use their property.  So this isn’t simply a hiring agreement where Marvel rent out a building.  They not only had to pay for that, they also had to accept NASA potentially interfering with the script.

In particular a phrase that is repeated is that the film makers weren’t allowed to do anything that might ‘degrade or diminish the goodwill’ associated with NASA, their logo and so on.  While there is more explicit language saying that NASA will not tolerate being portrayed as an ‘evil or corrupt’ organisation, the ambiguities in this core phrase in the agreement leave quite a lot of room for manoeuvre.

For example, NASA are portrayed alongside SHIELD as part of the JDEM.  But this experiment accidentally leaves the world open to invasion, first by the Norse demi-god Loki and consequently by generic giant alien monsters.  While NASA aren’t being portrayed as evil they are portrayed as part of an incredibly arrogant and incompetent mistake that opens the door to a massive threat.  However, it seems this does not ‘degrade or diminish the goodwill’ associated with NASA, this is an idea they are perfectly content to be out in one of the biggest films of all time.  Just like the Pentagon they quite like the idea of portraying the universe as dangerous, and as something that sometimes they might accidentally make more dangerous.  But if there are demi-gods and aliens out there, aren’t you glad NASA are here to deal with it so that you don’t have to?