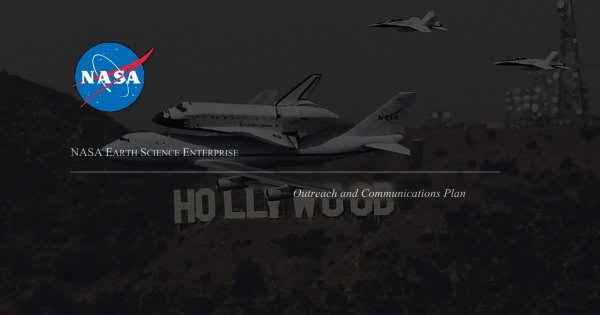 Just like most major government agencies, NASA has been involved in the entertainment industry for decades.  For 2001: A Space Odyssey Stanley Kubrick hired several technical advisors including Frederick Ordway III, NASA astronaut Donald Slayton and the senior administrator of the Apollo project George Mueller. Kubrick with technical advisers for 2001 at MGM Borehamwood

However, NASA did not found a formal Entertainment Liaison Office until 1997.  It was run by actress Bobbie Faye Ferguson, best known for being in Dallas and for appearing in Space Cowboys, made with NASA assistance during her time there.  Nice work if you can get it.  Ferguson’s LinkedIn profile says that she left the job in 2001, but her IMDB page lists her as a NASA technical consultant on the 2005 film The Wild Blue Yonder.  We also know that in 2005 she moved over to take the equivalent job at the Department of Homeland Security, which is also when Bert Ulrich took over Ferguson’s job at NASA.

Ulrich has remained in charge of NASA’s entertainment media relations for the decade since then, and is quite vocal about his role (more so than his opposite numbers at the DOD, CIA, FBI and so on).  You can find his email address on NASA’s website, he has given interviews about working on recent films such as Interstellar, The Martian and Tomorrowland.  For obvious and nerdy reasons NASA particularly likes working with actors from Star Trek.  In 2012 both Captain Kirk (the original) and Wesley Crusher (who?) provided commentary for a video on the Mars Curiosity rover.

Similarly, in 2013 Levar Burton – best known as Geordi LeForge from Star Trek: The Next Generation – hosted a public service announcement about another Mars operation. However, it isn’t always smooth sailing – both the turkey of 2000 The Red Planet and the much more recent mockumentary horror Apollo 18 were refused assistance from NASA.  Or rather, as Bert Ulrich went to great pains to point out, ‘The film is a work of fiction, and we always knew that. We were minimally involved with this picture. We never even saw a rough cut.’  It seems the cult success of this truly entertaining film got NASA worried enough that they had to clarify and tell everyone that it is not a documentary and that (SPOILER) there aren’t monsters that look just like moon rocks living on the moon murdering astronauts.

The scale of NASA’s involvement in the entertainment industry is not easy to gauge.  Ulrich’s IMDB page only lists 7 credits, yet he is quoted in interviews saying he works on over 100 documentaries a year, alongside films and TV shows.  Another NASA spokesman Bob Jacobs said they approve ‘three to five scripts a year’, presumably meaning movie scripts.  Other known NASA-sponsored films include Gravity, Transformers III, Men in Black III, Apollo 13, Planet 51, The Avengers, and Armageddon (most of which also had Pentagon support).  Ulrich has given contradictory interviews on some of these films, denying involvement in some and describing their involvement explicitly in others.  Like Phil Strub of the DOD and Chase Brandon formerly of the CIA, it appears one of the jobs of an Entertainment Liaison Officer is to admit and deny your work at the same time.  There is also a NASA IMDB page, which mostly features episodes of Fat Guys in the Woods.

NASA’s media mission is about more that just self-promotion and recruitment, though Ulrich stresses that their involvement in Tomorrowland was encouraged by the inspirational message at the heart of the film.  Among the Public Affairs documents available via NASA’s website is a 2004 Outreach and Communication Plan by NASA’s Earth Science Enterprise.  The purpose of their outreach program was not simply to draw attention to themselves, but to portray a worldview where scientific discovery and technological development is benevolent to life, and NASA is at the heart of that: This broader worldview, what Lyotard called the Grand Narrative of Discovery, is perhaps best demonstrated by Interstellar.  The basic plot is of a world blighted by death and storms, rescued by NASA scientists finding a way through space to another solar system and a black hole leading to a 4D space-time jigsaw puzzle that enables the hero to communicate with his own daughter decades earlier to solve the riddle of gravity and save the world.  Or something.  Basically, the world’s fucked and NASA and science = our only hope. Yeah… Why didn’t they just reissue 2001 on blu-ray and save everyone a lot of time?

Also in 2004 NASA issued a document titled Public Affairs’ Functional Role, Mission, and Relationship to the NASA Strategic Plan.  Just as with the Pentagon, it describes NASA’s Office of Public Affairs more like a corporate PR division than a government agency,with officers working on News Releases, Press Kits, TV, Internet/New Media, even monitoring news for clippings to send to senior management and a minority outreach program.  One can only assume that in the decade since then that their operations have become more sophisticated (note: I was made aware of this document by a recent episode of Themes & Memes).  Given that shortly after these documents were issued NASA also updated its policy on releasing information, it appears that NASA senses new opportunities for itself.

You can download the NASA Earth Science Enterprise Outreach and Communication Plan, the Public Affairs’ Functional Role, Mission, and Relationship to the NASA Strategic Plan document, the updated Policy on the Release of Information and an FAQ on that policy in one handy file here (ZIP).