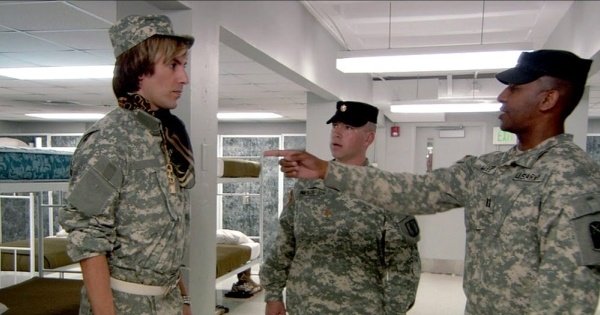 2009’s Brüno is probably the most shallow of Sacha Baron Cohen’s movies, based almost solely around the comedy of irritation and embarrassment. However, the story of its production is quite fascinating and a great example of how to get the state to accidentally or unwittingly sponsor your movie.  Emails from the US National Guard show how the production company duped the military into thinking they were making a straight documentary, when in reality they were making a mockumentary about a gay Austrian fashionista.

The CIA and Brüno

While the CIA were not directly involved in this comedic masterpiece there are a couple of tangential connections.  The film was produced by Jay Roach, the director and executive producer of Meet the Parents which was made with help from CIA entertainment liaison Chase Brandon and former CIA officer Milt Bearden.  Roach recently produced the short-lived satirical TV series The Brink, which is genuinely quite cutting and very funny.

The producers of Brüno also employed former CIA officer John Kiriakou as a ‘Middle East consultant’.  Cohen and the other crew hired the media branch of McLarty Associates headed by Rich Klein, who employed Kiriakou as part of his consultancy panel.  An article explains:

Kiriakou said that he advised Baron Cohen to “stay away from the religious types, because they will kill you, your crew, and they will go out into the streets and kill people who remind them of you.” He suggested that Baron Cohen film in Damascus. Syria was peaceful at the time and home to retired leftist Palestinian revolutionaries who might coöperate. The endeavor did not end well; after the film was released, in 2009, a Palestinian interviewed onscreen by Baron Cohen sued for slander. (A spokesman for Baron Cohen declined to comment.)

The National Guard and Brüno

At one point in the film Brüno decides to try to become straight and enlists the help of some Christian ‘gay converters’ who he asks ‘Are there any activities you suggest where I’ll be surrounded by just straight guys?’.  Next we see our eponymous hero at Fort McClellan, a US Army National Guard base in Alabama and home to their Officer Candidate School.

Emails obtained via a FOIA request by The Black Vault show that the production company effectively lied their way into being able to shoot this sequence.  They approached the National Guard claiming to be making a documentary for German TV about the ‘Fabric of America’.  One email from a producer reads:

We have been exploring the fabric of America, tell the story of her citizens by visiting the workplace.  We have been fortunate enough to film with local sports teams and their tireless athletes, artists in the culinary industry, politicians, fashion designers, musicians, and many other professionals who contribute to the rich and vibrant tapestry of our country.

While in the Huntsville area we would be honored to film with the Alabama National Guard.  You are a strong and proud organization who carries out your challenging duties with bravery and with class.  As we discussed over the phone, we would love our correspondent to get a taste of what it is like to undergo the intense training members of the National Guard must endure to get in peak physical condition.

Flattery, they say, will get you nowhere.  The National Guard agreed to allow the film crew onto their base and to put Brüno through his paces as a new recruit.  This leads to some truly ridiculous moments including when the drill sergeant doing his very best Full Metal Jacket impression shouts ‘I don’t want your finger in my alley’ at an obviously gay man.  Don’t ask, don’t tell would be my advice to this particular officer.

Naturally, the agreement broke down quite quickly.  The officer in charge of supervising the visit of the film crew, Lieutenant Colonel Cindy Bachus, explained:

We were contacted by a film crew who said they wanted to follow a soldier around and see what they did. They said that there would be a German reporter who wanted to experience the different jobs people do here, for a programme called “Fabric of America”.

We did a primary check of this company but you have to understand that we encourage the media and take people at their word. We have 1,600 troops who are being deployed to Iraq and Afghanistan right now and this is not one of the things I spend a lot of time on.

We had agreed that Mr Cohen would see what it was like to join our officer candidate school. But we soon decided that, with him not taking it seriously, it was time for it to end. We confronted them and they had to leave. It wasn’t what we signed on for.

It’s an embarrassment to the Alabama National Guard.  Since then we have put in protocols to make sure this doesn’t happen again.

After Brüno decides he must become straight to find fame, he goes on a cross-country journey to eradicate any hint of his homosexuality. A logical stop to do such complicated work? The U.S. Army National Guard headquarters in Anniston, Alabama, about 65 miles from Birmingham. Unfortunately, this unit of the National Guard was unable to guard its own base from one canny British infiltrator.

The production lucked into the scenario when they asked a contact at the National Guard if the production could imbed on-air talent for the day. They explained that the purpose of the visit was to let their audience know what it was like to live and work as a candidate in officer training school. While there, Baron Cohen, dressed in the latest style of fatigues (read: Dolce & Gabbana), perplexed his fellow soldiers with his stunts.

It was not one of the finer days for national defense. When the production’s van came into the training ground, no one was asked for identification. Oddly enough, it turned out to be the perfect storm of confidentiality for the team, as the younger recruits were not allowed to speak freely unless they received the go-ahead by a commanding officer. If they had given permission earlier, the senior members would have known what several of the 20- to 22-year-old guys did: The man behind Borat was in their midst.

Once the crew heard the buzz that some of the young men suspected Baron Cohen was there, they packed up the team and got them out ASAP. As they were loading the performer into the van and driving rapidly off the base, the guards yelled out for them to stop and began to close the gate. Ten seconds too late, as Brüno (and the perfect amount of footage of his acting up during officer training school) were out the door. Had the team been moments later in their exit, the National Guard could have confiscated the tapes and they wouldn’t have seen the light of day.

When finally confronted with the question of “Did you know who that trainee was?,” the recruits responded with a firm: “Yes, sir! Sacha Baron Cohen, sir!”

I wonder, if the footage was obtained illegally, by the production company deceiving the military – which they certainly did and so it certainly was – then it would have been a relatively simple matter for the Pentagon to prevent them from using it in the final movie.  Apparently they either never considered this, or saw that there was better PR in admitting their mistake and embarrassment over what happened.  Maybe the Pentagon do have a sense of humour, or maybe they ultimately saw some beneficial propaganda value in letting the producers of Brüno use the footage.

The production notes contain numerous other stories from the making of Brüno including how Cohen was arrested several times, how they persuaded a former Jordanian Prime Minister to agree to a 90-minute interview, their visit to meet with the leader of the designated terrorist organisation the al-Aqsa Martyrs’ Brigade, and how the film nearly caused riots in both Israel and Arkansas.  Exactly how much of this is true, I leave it for you to judge.

US National Guard emails on filming of Brüno