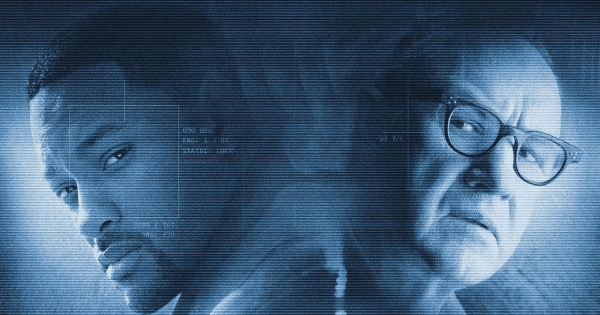 NSA emails on Enemy of the State

Paranoid thriller Enemy of the State provoked such a reaction within the NSA that they instigated a large PR campaign to counter public perceptions of a surveillance agency running wild.  NSA emails show that even while the movie was being made, agency employees were unhappy about the producers filming from the skies over Fort Meade.  They also show that the NSA were asked to provide help on the production, but refused.

NSA involvement in Enemy of the State

In December 1998 an NSA official wrote to their Public Affairs Office (PAO) saying that they had seen a preview of the movie and that ‘to my surprise found out that NSA were the ‘bad guys” in it.’  The NSAer asked if the PAO had been in touch with the film-makers.  The reply came back:

The producer, director and some members of the production staff for ”Enemy of the State” paid two visits to NSA as they were making the movie. They sought assistance to make their presentation accurate and during the second visit asked to film on-location at the Headquarters complex. PAO provided them with the general information we provide to the public and members of the media and we organized a tour of the Museum for them.

DoD Instruction 5410.16 guides NSA’s interaction and support to entertainment-oriented productions. Under the Instruction, production companies seeking DoD assistance must present enough information about the program (ideally, the script), so that the proposal can be evaluated for accuracy and the benefit which could accrue to the DOD if assistance was provided. The producers opted not to provide that information, so NSA could not permit filming at our facilities.

In April, after the second visit, the production company took some aerial footage from a helicopter over the Headquarters complex which the Agency was unable to prohibit because of FAA policies on air space. We have also learned that the producers hired a former NSAer as a consultant. Public Affairs was queried in late 1997 about employees appearing as “extras” in location shots made in the Baltimore-Washington area. Employees were permitted to participate as long as they observed all pertinent security and ethics regulations. PAO waits with the rest of the Agency workforce to see how accurate the portrayal of NSA is and what fell to the cutting-room floor.

While they don’t name names this means that Jerry Bruckheimer and Tony Scott visited NSA and that they asked to be able to film at the HQ but were not willing the let the NSA vet the script beforehand.  As with the DOD this meant that no production assistance was provided to Enemy of the State by the NSA, beyond a couple of minor tours for production staff.  While the CIA were willing to show off gadgetry and provided technical consultancy via their entertainment liaison Chase Brandon, the NSA smelt a rat.

This opens up an interesting question, because the CIA had no apparent qualms about inviting Bruckheimer, Scott, Will Smith and others to Langley, even writing about this in their in-house magazine.  But the script portrays the NSA horribly – almost all of their officers are either corrupt murderers or providing support to corrupt murderers.  When, at the end of the film, Jack Black tries to excuse his part in the conspiracy by saying that he thought it was all part of a training exercise this is apparently accepted by his superiors.  Did the CIA simply not care about the NSA’s reputation?  Were they trying to damage it?

A similar case where the shoe was on the other foot was Clear and Present Danger, where the DOD provided full co-operation after lengthy script rewrites to improve the depiction not just of the US military but also of the White House and the Colombian government.  However, the CIA are shown to be corrupt, murderous liars, which is why they rejected requests for support on the film.  Are there any regulations on how these different government offices can use entertainment to promote themselves that are concerned with protecting other agencies and departments?  Or is it every spy/soldier for himself?

The NSA’s response to Enemy of the State

When one employee read about the Enemy of the State crew flying over Fort Meade for filming purposes they complained to the PAO, asking why weren’t NSA employees warned about this ahead of time?  They wrote, ‘If we had known that the helicopter hovering over the Agency was taking pictures, perhaps we wouldn’t have stood staring up at it’.  They also objected to not being warned that their car would appear in a film, noting, ‘Seems to me that the Public and Media Affairs Office was too busy informing the “public” and forgot to inform us’.  Another email responding to this complaint said, ‘I 100% agree!!!! I was standing in the parking lot staring like an idiot,-wondering why this helicopter with some strange object underneath it was hovering above me.. Will Touchstone be getting in touch with me so I can get paid for my appearance in this movie?
Because I have no intention of allowing my image to be used for free’.

This set the tone for the NSA’s response to the film.  Michael Hayden was appointed NSA director just as the film was coming out and was ‘appalled’ by how the Agency were depicted in it, causing him to launch a full-scale PR operation to overhaul the NSA’s image.  He told CNN:

I made the judgment that we couldn’t survive with the popular impression of this agency being formed by the last Will Smith movie… It has to be somewhat a secretive agency, and right in the middle of a political culture that just trusts two things most of all: power and secrecy.  That’s a challenge for us, and that’s why, frankly, we’re trying to explain what it is we do for America, how it is we follow the law. Could there be abuses? Of course. Would there be? I am looking you and the American people in the eye and saying: there are not.

In the same 2001 interview Hayden invited CNN to film inside the NSA and talk to their employees, to try to counter this impression.  A CNN special followed, saying:

When General Michael Hayden saw the movie, he saw a problem — an image problem. That is in part why the NSA decided to let CNN inside the NSA to see where code breakers gather, and code makers protect the nation’s secrets. Above all, Hayden knows NSA cannot afford to be seen as trampling on the privacy rights of U.S. citizens.

Enemy of the State screenwriter Dan Marconi said in a 2013 interview (15 years after the film came out) that he was invited by the Pentagon to discuss the film after it was released.

The Department of Defense asked me to come down and speak to them after the film came out. I met CIA guys and NSA guys. I found them all to be very professional. They were very focused on the mission and on defending the country. I didn’t walk away with a sense that any of them were malevolent. But some of them also had a very myopic view—here’s what you do, and you sit at your computer and you do it.

What you have is this machine that’s self-perpetuating. It starts to grow on its own, and the more power it gets, the more power it wants to assume. And as a result of the Patriot Act and 9/11, that apparatus is looking more and more at what’s going on inside this country.

The sheer contrast between the bare-faced denials of Michael Hayden back in 2001, and our post-Snowden awareness that he was either lying or was clueless as to what the NSA was really doing, marks a major difference between then and now.  Today we are much more aware of what these agencies do – the notion of their actions being entirely secret is laughable.  However, that has made little, if any, difference to their ability to commit these crimes.  They are still above the law, it’s just that a lot more people know that now.  Whether that’s actually a worse or better result, and as such whether Enemy of the State worked for or against the NSA in the long-term, I leave up to you to judge.

NSA emails on Enemy of the State