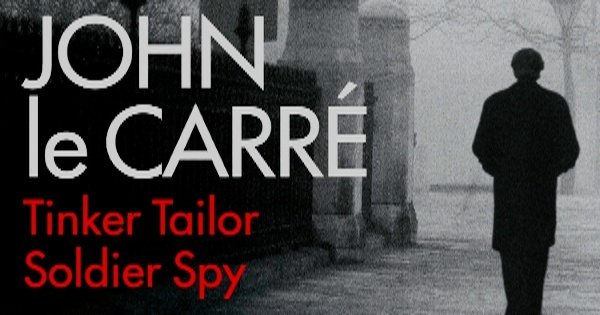 Recently made available by Cryptome this NSA report originally appeared in an issue of their publication Cryptolog in 1992.  It examines the role that signals intelligence (SIGINT) plays in the storylines of several John le Carré novels and considers whether the inaccuracies and limitations in these portrayals are of benefit to the NSA.  They assess the influence of the novels on both the general public and on policy makers and in a moment of great irony they accuse le Carré of overlooking the moral consequences of his more favoured human intelligence (HUMINT), while doing the exact same thing themselves.

In this novel a unit with the British Ministry of Defence recruits an agent codenamed ‘Mayfly’ to infiltrate into East Germany to check out reports of Soviet missile deployments.  As the NSA report notes:

One of the planners asks George Smiley if MI6 will loan them modem short duration signal agent comms gear for a “training exercise.”

Having never read this novel I was totally unaware that this is yet another place where the ‘exercise as disguise for black operation’ meme appears.  While le Carré left British intelligence after the success of The Spy Who Came in From the Cold he had a similar deal to Frederick Forsyth in that his fiction was still vetted in some way by MI5 and MI6.  As such this is yet another instance of this idea appearing in a piece of entertainment that was likely reviewed by the security state (see ClandesTime 092 for a fuller discussion of this idea).

In the end Mayfly’s transmissions are so amateurish that he is captured and possibly killed by the Communist security services and it is revealed that Smiley knew all along that it was a real operation, not just an exercise, and that he allowed it to continue, hoping it would fail.  The NSA’s article states:

Le Carré has since said that this book was heavily influenced by the Bay of Pigs disaster.

This is ironic as the Bay of Pigs operation also made use of the ‘exercise as cover and deception’ tactic.

The first of the le Carré novels to be set in the Middle East this book centres around Israeli intelligence efforts to capture or kill a Palestinian terrorist who is murdering Israelis in Europe.

While SIGINT plays no role in this novel, the Israeli communications gear is described in some detail. Most of the operation is supported by a mobile comms van equipped with both secure voice and enciphered printer. When forced to use clear voice, they use the callsigns and jargon of taxi companies and other legitimate users of mobile comms.

Another interesting detail recorded in the NSA’s report is that the Israelis recruit a British actress named Charlie as part of their operations.  It appears that le Carré knew an awful lot about what was really going on as the entertainment and theatre industries have been a recruitment ground for intelligence services for a long time.

Confirming that all the prior le Carré novels had been subject to vetting by the security services the NSA’s report notes how A Perfect Spy is the book:

[W]hich le Carré has described as his first work not submitted to Her Majesty’s Government for prepublication review.

The NSA’s review of this le Carré novel is quite lengthy as SIGINT plays a crucial role in the story of a missing (presumed defected) MI6 station chief.  They also seem to take some pleasure in the fact that the CIA are kept in the dark throughout much of the story while American SIGINT specialists (presumably the NSA) help to find the missing agent.

The NSA report discusses several other books, focusing always on the role SIGINT plays in the plot, before concluding:

Le Carré does not display much awareness of broader SIGINT applications, such as on political, economic, and military topics. This is consistent with what is known about his intelligence career-he was a case officer in the 1950’s and 1960’s and would probably not have had regular access to mainstream SIGINT reporting.

There is also the matter of censorship by the British government; le Carré claims that he submitted every novel prior to Perfect Spy for pre-publication review. It is unlikely that official reviewers would have allowed any accurate information about British or American SIGINT activities to be published.

In this regard it is interesting to note that no le Carré novel has ever referred to “NSA” or “GCHQ”; this could not possibly have been because he didn’t know about those organizations.

People involved in any of the intelligence disciplines have an ambivalent attitude towards having their craft described in fiction. On the one hand, we sneer at the more lurid and fanciful fictional descriptions of our profession; on the other hand, we are appalled and often want legal action taken against writers who get it right. So in this sense, as SIGINT professionals we should be happy that Ie Carre’s references to our business are few and mostly uninformative.

The report rounds off by suggesting that le Carré was a Luddite who was anti-technology and a strong partisan in support of human intelligence (HUMINT).  This is broadly true, though the NSA attributes this to him being anti-American, quoting from interviews where le Carré said that Western intelligence is too dependent on technological means and sources and this is a consequence of US dominance of the field.  Naturally, the NSA don’t like these sort of comments and devote several paragraphs to slating le Carré and his opinions.  They even argue that le Carré overlooked the moral impact of HUMINT saying:

The technical intelligence disciplines have little or no impact on human beings; HUMINT, by definition, involves the exploitation of people and carries a high risk of harming them.

This is another moment of great irony, as the NSA fail to recognise the psychological impact and moral implications of mass surveillance, pretending that if people don’t know they are being spied on by machines then it doesn’t matter to them.  Just as they accuse le Carré of being blinkered and highly subjective, so is their review of his books and his view of the world.

The only section of the NSA’s newsletter that was previously classified is titled ‘Why These Novels Matter’.  The author writes:

Since le Carré writings and public pronouncements (whether because of ignorance, discretion, or censorship) don’t appear to pose any threat to SIGINT sources and methods, does it matter to US what he writes? It matters because it adds to a public mystique about HUMINT that has a real (although intangible) impact on the way the Intelligence Community is perceived both by the public and by the rest of the government.

They go on to argue that because le Carré and other spy authors tend to laud the spies and spymasters rather than the technical wizards that this affects the budgets and authority accorded to different (sometimes rival) intelligence services.

In a perfect world decision makers should be so well informed that they couldn’t possibly be influenced by an Ian Fleming, a John le Carré, or a Tom Clancy, but in this imperfect world it sometimes happens.

In the final analysis, we’re obviously better off that a writer as widely read as le Carré doesn’t write accurately about SIGINT. But it is galling to know that his books and publiccomments make marginally more difficult the task of ensuring that resources are allocated within the Intelligence Community on the basis of real contributions instead ofon the basis of myth and mystique. It is also ironic that the CIA would benefit from all this in even a small way, since le Carré has made his distaste for that organization so obvious.