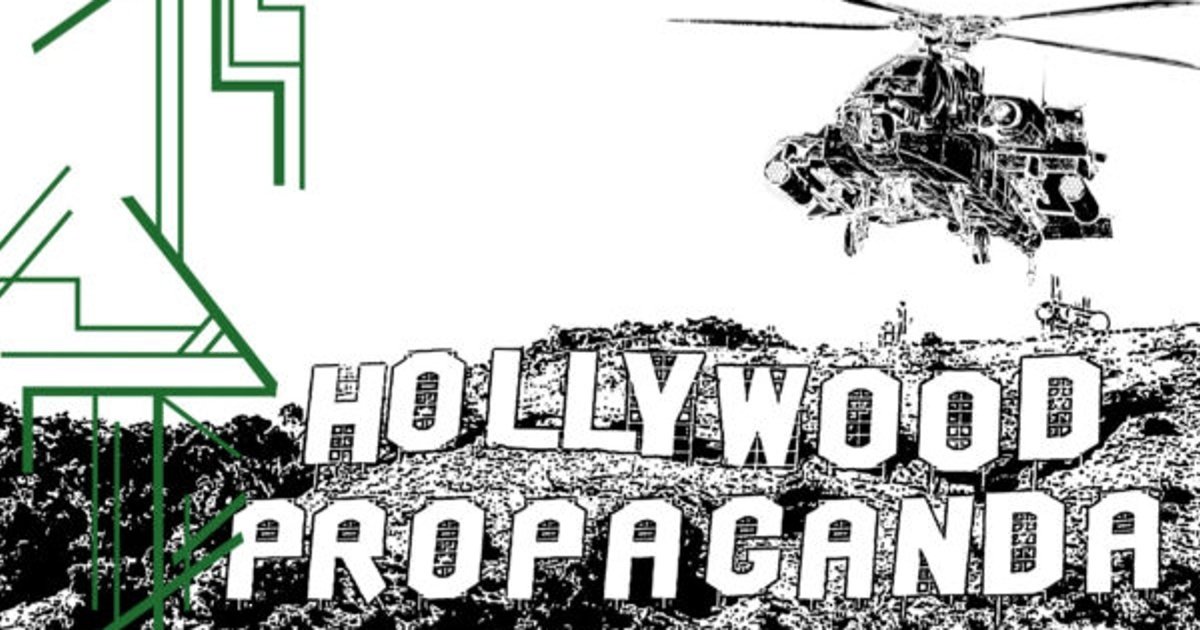 Reel Power broke the mould for books covering the role of Hollywood in promoting militarism, war and the political status quo.  It took the Chomsky/Herman propaganda model and adapted it to film and TV, showing how Hollywood’s output varies, but tends to repeat and reinforce the same ideological priorities regardless of genre or budget.  A French edition of Reel Power – called Hollywood Propaganda – has just been published, so here is the new introduction for this edition, written by Matt Alford, the author of Reel Power/Hollywood Propaganda, and co-author of our book National Security Cinema.

Since Reel Power was first published, American popular culture has remained overwhelmingly a reflection of the power structures that shape its political culture.

During the 2010s we have seen the continuance of major military-sponsored franchises – more Transformers, more Marvel, and there’s more Avatar, Terminator and Top Gun on the way.

Even more brazenly, in 2014 Sony released The Interview, a film which imagined a CIA assassination of Kim Jong Un of North Korea. Such a direct fantasy about killing a foreign leader has not been committed to film since Iraq’s Saddam Hussein was squished in the 1993 Charlie Sheen movie, Hot Shots – and even then it was achieved with slapstick rather than through a realistic immolation in a helicopter. And, unlike Hot Shots, the US weaponised The Interview, making thousands of copies on USB drives and sending them over the Demilitarized Zone in the hopes of igniting a revolution among the North Korean people.

MGM even remade 1984’s oft-ridiculed Red Dawn, which had depicted a Soviet invasion of the United States with the script subjected to the guidance of President Reagan’s secretary of state General Al Haig. In the 2012 version, MGM replaced the Soviets with the Chinese until Beijing, incensed by a leaked copy of the shooting script, complained. At great expense, the studio chopped out the Chinese and replaced them with, of course, North Koreans.

So far, so predictable.

More intriguingly, films like Get Out and The Shooter wowed audiences while pointing to the possibilities for progressive content even in the mainstream. Others, such as Kill the Messenger, The East, and The Ghost Writer – great dramas about what has become known as the “deep state” – were buried by their own distributors, as has been routine. At the same time, films like Black Panther (depicting an African independence movement) and American Made (Tom Cruise and US drug-running) gave the illusion of critical content but mangled the historical record, for one reason or another, to mask more disturbing histories – akin to a “limited hang-out”, to use the CIA jargon.

When I was first looking at the relationship between politics and motion pictures around the turn of the Twenty-First century, as a scholarly community we all just accepted the consensus opinion that a small office at the Pentagon had assisted the production of around 200 or so films throughout the history of modern media. This was highly misleading. Through working with a non-affiliated researcher Tom Secker, labelled by bureaucrats in the British state as a “vexatious requester” due to his extensive FOIA inquiries, I was able to establish that since 1911 over eight hundred films had received DOD or CIA support. Most surprisingly, there were over 1,000 TV show titles in the list. Simply put, the US government has been quietly reworking thousands of scripts and no one really had any idea except their PR offices.

I am writing this new introduction while on a research trip in Washington, DC. Vast amounts of annotated scripts and DOD-Hollywood correspondence had been either taken by or donated to a single historian—Lawrence Suid—from 1976 to 2005, possibly beyond. Suid kept his material in a private archive in a public library in Georgetown University, Washington DC, and for many years his apparent unwillingness to share the material represents a substantial and unnecessary loss to the research community. The only person who seems to have had some limited access – and most of that was directly via the Marines rather than anywhere else – was an LA Times journalist called David Robb, who was able to rush out an explosive but unsourced book on the subject in 2004. The library was unable to explain how or why the papers arrived or where the rest of it went. The Pentagon can dodge FOIA requests on this by claiming that the material is not in their hands.

In 2017 I noticed that Georgetown Library had rearranged their collections and some of the material attributed to Suid appeared to be available without his consent. Packed into 13 boxes was evidence of yet more government influence over film and TV, including numerous examples that had simply never been mentioned anywhere, although it was clear from both Robb and Suid’s work that huge quantities of that material, including the most controversial parts, had been removed. My co-author Tom Secker and I are currently raising funds to buy a similar haul from the Marines.

In the meantime, I hope you enjoy this new translation of Reel Power and that it helps you navigate the screen entertainment industry to find more joy and reject more lies.