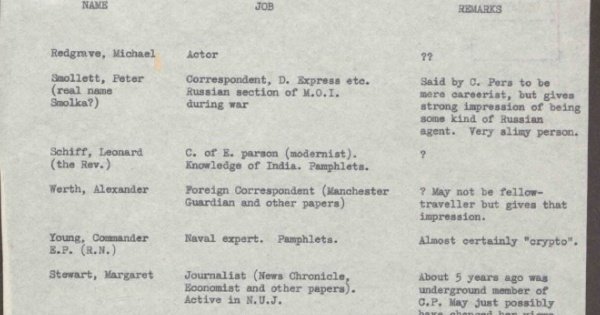 In 1948 the post-war Labour government set up an anti-Communist propaganda unit within the Foreign Office called the Information Research Department (IRD).  In March 1949, less than a year before Orwell’s death, he was approached by Celia Kirwan who was working for the IRD and he subsequently provided her with a list of crypto-communists and fellow travelers who would not be suitable for recruitment as IRD propagandists.

When this list first became public knowledge in 2003 it caused quite a stir, depicting Orwell as some kind of government informant, even leading to bizarre theories that he was working for MI5 all along.  However, the story is complicated by the fact that Orwell was in the last part of his life, dying of tuberculosis, and was approached by a woman who only a few years earlier he had asked to marry him.  Similarly, Orwell himself had been under Special Branch and MI5 investigation for years, as indeed had Celia’s former employer Cyril Connolly, and her brother-in-law Arthur Koestler.

The list itself includes Charlie Chaplin – who has extensive FBI and MI5 files, and was quite open about his Leftist views – JB Priestley – who has a lengthy MI5 file – and Michael Redgrave, who went on to appear in the CIA’s film adaptation of 1984 after Orwell died, and was the subject of a 20 year MI5 investigation.  It also includes the names of other journalists, writers, historians, editors and the like along with Orwell’s comments on them, which are often blunt and highly amusing.